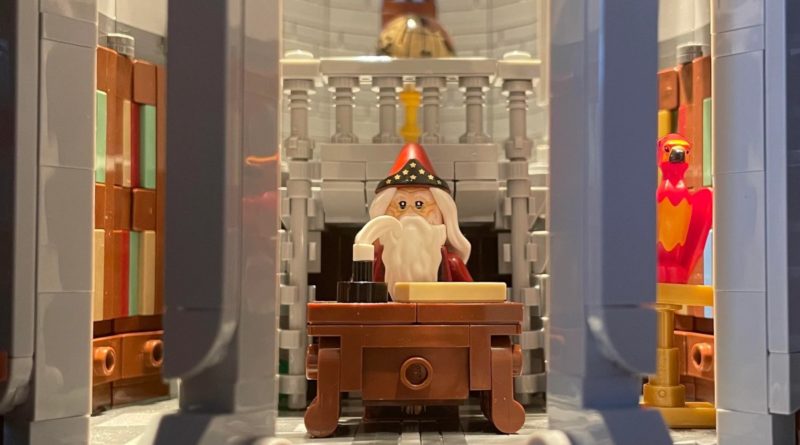 One of the most intricate locations in the Wizarding World has been recreated in a custom LEGO Harry Potter build, demonstrating the skills needed to make the Hogwarts headmaster’s office.

Dumbledore is clearly the favourite character of Reddit user stej123, who has authentically depicted the titular wizard’s office using a variety of bricks and techniques. The curved structure of the three interconnected towers appears at the top of the tallest spire of Hogwarts and has yet to be represented (in minifigure scale) in a modern LEGO Harry Potter set.

Unable to wait for that day to hopefully arrive, the builder has instead decided to pursue their own, integrating even the finer details of the office including the various portraits on the walls that feature the upper half of minifigures. This allowed a sufficient amount of detail to be captured at the scale and aligns with Hogwarts’ living paintings that dwell throughout the castle.

Ascending to the next tower, Fawkes from the recent 76394 Fawkes, Dumbledore’s Phoenix (review) sits waiting for his next command, or maybe meal. An older model has represented the location before as 4729 Dumbledore’s Office was released in 2002, meaning it’s almost been 20 years since we received the magical destination in a dedicated official model.

The exterior of the build also features a sufficient amount of detail in the intricate brickwork that rises according to the tower’s placement on the spire of the castle.

For more on the LEGO Wizarding world, check out our in-depth review for the next massive creation in the theme – 76391 Hogwarts Icons Collectors’ Edition – which launches on September 2.