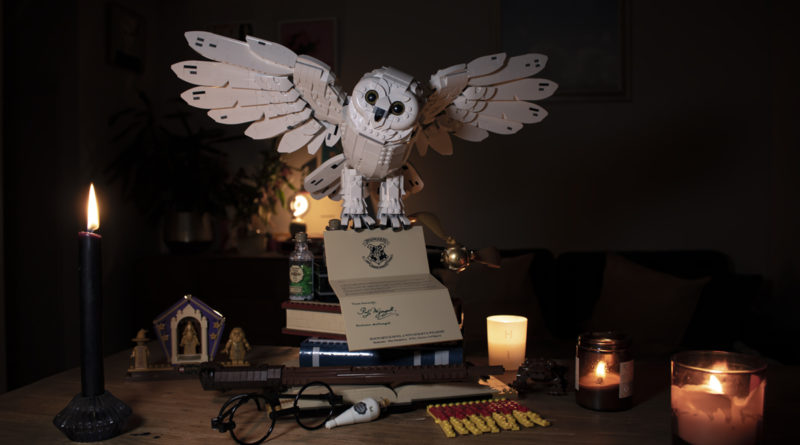 It’s been 20 years since LEGO fans were introduced to the Wizarding World of Harry Potter (the early sets were among the first to introduce flesh-coloured minifigures in 2004), and the LEGO Group has released a series of special 20th-anniversary sets this summer to commemorate the milestone. While some have been excellent, none have come close to the sheer scale, ambition and pure fan service of 76391 Hogwarts Icons Collectors’ Edition.

Conjuring up something of a dream come true for fans of the fantastical franchise, this set offers iconic brick-built replicas of everything from Harry Potter’s famous round glasses to Tom Riddle’s diary, alongside myriad magical objects including mystical potion bottles, wands, house scarves and, to top the whole thing off, a stunningly beautiful rendition of Hedwig that’s far superior to the smaller 75979 Hedwig launched last year.

On paper, these kinds of ‘life-like’ models might not appeal to everyone, but there is something so enchanting about 76391 Hogwarts Icons Collector’s Edition that even the most cynical of LEGO fans will no doubt fall under its spell.

It’s rare for a LEGO set to capture the essence of its source material so perfectly, but here each stage of the build feels as enchanting as the last. It genuinely feels like you are creating magic as you work your way through the set, with each object feeling like it’s been transported straight from the halls of Hogwarts. It really can’t be overstated how accurate they look and how enjoyable they are to construct.

Sometimes sets of this size can feel daunting, especially when opening the box and finding 22 numbered bags to work through, but there is so much to build here that no stage ever feels overwhelming or too taxing – it’s just pure LEGO fun. Even those who are unfamiliar with Harry Potter will enjoy working their way through this set, partly thanks to the highly-detailed information about every object that’s included within the manual. It feels like every fan, hardcore or casual, has been catered for.

The build begins with the construction of Harry’s trademark round glasses. They’re a very simple yet effective design, achieved by using a brand new hoop element. They look great, with the added bonus that they can actually be worn. It’s an incredibly fun (yet über-geeky) experience wearing a pair of brick-built Harry Potter glasses – embrace it, though, as it’s a brilliant touch and a really fun start to the experience. It sets the tone for the build perfectly, as each object is equally effective and enjoyable to put together, and not to mention incredibly realistic, too.

Felix Felicos’ liquid luck bottle looks excellent (and glows in the dark), and Harry’s wand is a very smart build using slightly staggered layers to create the accurate shaping from handle to tip. Tiles and plates add texture throughout and it handles perfectly. If you thought wearing Harry’s glasses was a little nerdy, just wait until you wave his wand around casting imaginary spells – it’s LEGO playability on a life-size scale.

Going into too much detail into how each object comes together will spoil the magic a little, but each one introduces more and more intelligent parts usage (just take a look at how the chocolate frog’s feet come together) and an abundance of clever and unique techniques (creating the shaping of the bottle tops is particularly smart).

Don’t be fooled into thinking this is a set that lacks large-scale building, though: the main assembly of the model is a pile of books (including an open Tom Riddle’s diary) that an incredible brick-built Hedwig perches upon.

The books are beautifully constructed and are wonderfully life-like, using curved slopes for the folds of the open pages and a series of 1×4 panels stacked on one another (the same technique used for the steps of 21045 Trafalgar Square) to represent the rest of the pages inside the book. It’s a great technique, and one that brings so much accuracy to the finished model. The covers of the stacked books are equally as authentic, and the slight overhang – achieved using a series of 2×4 double jumpers – looks excellent.

Perched atop the books is the centerpiece of the entire model, Hedwig. Recreating the natural shapes of feathers is not an easy task by any means, but the designers have pulled out every trick, new and old, in order to create an absolutely stunning rendition of the Harry Potter franchise’s most iconic owl.

The feathers on Hedwig’s legs are recreated beautifully using white pentagonal tiles, 2×2 plates with teeth and 1×2 tiles. Her curved body is made using right and left 2x3x8 wedges, 3×10 wedges and 2×6 wedges, which creates a realistic look. Her large tail feather is comprised of two curved sub-assemblies that connect together using a 2L bar with stop ring attached to a round 1×1 tile with open hole, resulting in an incredible shape. The studs-not-on-top technique used to add pockets of black and grey gives the owl a lovely patterned tail, which is also used throughout the wing feathers.

Hedwig’s face uses a similar technique found among last year’s Brick Sketches, slowly layering up the details with curved plates and tiles stacked on one another, simultaneously creating depth and detail. The printed 2×2 eyes look absolutely spectacular, and almost feel like they follow you around the room.

Watching this highly-realistic owl take shape in front of your eyes is an absolute wonderment. There is slight repetition when putting together the wing feathers, but it is so worth it, because what a stunning piece of art the finished model is. The shaping, colouring, scale, and authenticity of the whole thing is just sensational. 75979 Hedwig was decent, but this is just phenomenal. It’s also worth noting – and this is something that’s not always the case with some larger LEGO sets – that it looks beautiful from every direction. The back of the bird actually has even more detail than the front.

It sounds as though everything within this set is perfect, but there is one negative that should be pointed out: the brick-built house scarves. These are by far the weakest element of the entire set, and compared to how realistic everything else looks, really stand out. Away from the context of the rest of the set, you’d be hard-pressed to know what it’s supposed to be, and even within the set it’s still a little unclear. It’s a nice attempt to get the house scarves into the build, which of course are integral to Hogwarts pupils, but do they add to the set? Probably not enough to justify their inclusion.

To be fair, to say the weakest part is just a small brick-built scarf that uses only a handful of the set’s 3,010 parts is a pretty impressive feat, and in no way takes away from the overall appeal of 76391 Hogwarts Icons Collectors’ Edition. At least the designers included the pieces for all four house scarves, depending on your preference (Hufflepuff all the way!).

Scarves aside, having completed what is a truly captivating, spell-binding experience, the final element to add is the printed (and customisable if you’re happy scrawling over your LEGO) acceptance letter to Hogwarts School of Witchcraft and Wizardry. After being taken on such a magical building journey, it definitely feels like you’ve earned it (even if that letter contains a spelling error…).

Across the 20th-anniversary wave of sets already released, the LEGO Group has included six special (and highly collectible) golden minifigures. Fan-favourites from Harry, Ron and Hermione to Snape and Voldemort have all been transformed into stunning golden versions of their respective minifigures – but three notable characters seemed to be missing.

76391 Hogwarts Icons Collectors’ Edition solves that (Tom) riddle and takes the full count of golden anniversary figures from six to nine, giving us Professor McGonagall, Rubeus Hagrid and Professor Dumbledore – all of which are absolutely stunning, with beautiful printing throughout.

Even better is the chocolate frog card base that is used to display them. It’s another smart build with the purple frame wrapping around the large arch piece. The arch itself includes printed ‘Dumbledore’ and ‘Harry Potter’ plaques, which are front and centre, with Dumbledore himself taking centre stage. His two Hogwarts colleagues stand either side.

Those lucky enough to have purchased all of the 20th-anniversary sets will also be able to extend the base, allowing all nine minifigures to be displayed at once. It’s an unexpected addition to this set, but one that just adds even more to the overall appeal.

76391 Hogwarts Icons Collectors’ Edition is such a magnificent display piece, and the journey to get there is such a wondrous experience that the price almost doesn’t matter. Of course, this is at the higher end of the scale when it comes to LEGO products, and so it is important to feel you are getting good value for money, but this really offers that in spades.

Not only is the set a beautiful thing to behold and the build so much fun, but there’s also the three highly-desirable golden minifigures to take into account too. No doubt they will command high prices on the aftermarket in years to come.

For a set with over 3,000 pieces, the price point feels both fair and in-keeping with other similar products currently on the market, but really goes one step beyond most of its contemporaries in offering such a complete, all-round package in just the one box.

In case you haven’t worked it out by now, we absolutely love 76391 Hogwarts Icons Collectors’ Edition. It’s an instant must-have for Harry Potter fans, and really offers something for everyone. Younger fans will love being able to play with the props (and even wear some of them too), while the model will no doubt take centre stage in any older fans’ displays.

To say that this is up there with 71043 Hogwarts Castle as the greatest LEGO Harry Potter set of all time is a huge claim, but one that 76391 Hogwarts Icons Collectors’ Edition has proved itself worthy of. It’s an eye-catching, jaw-dropping, attention-grabbing set that will look stunning no matter where it’s displayed. These kinds of ‘life-like’ builds don’t usually offer much in the way of playability, but this set has so much stuff to play with that it’s equally as fun to mess around with as it is to look at.

If you’re balking at the claim that this is the best LEGO Harry Potter set ever – after all, it’s not a traditional LEGO playset – it cannot be denied that it’s certainly one of the most accessible. Those who are not fans of Harry Potter will still gain a tonne of enjoyment from the build, and the final model is so beautiful that it just looks incredible on display, regardless of the subject matter. (Birders will be happy, for one.)

Ultimately, whether or not this set becomes part of your collection comes down to whether or not you can afford it, because really there is no other reason not to head down to your local LEGO Store and cry ‘Accio 76391 Hogwarts Icons Collectors’ Edition!’ the moment it launches.

Support the work that Brick Fanatics does by purchasing your LEGO Harry Potter sets using any one of our affiliate links. Thank you!

76391 Hogwarts Icons Collectors’ Edition contains 22 bags of varying size. Many of the smaller side builds contained within the set come together very quickly, but the main build of Hedwig and the display stand made from brick-built books is definitely more involved. In total this will probably take around six to eight hours to finish.

How many pieces are in LEGO Harry Potter 76391 Hogwarts Icons Collectors’ Edition?

76391 Hogwarts Icons Collectors’ Edition contains a number of smaller brick-built objects that can be spread amongst the main model, making for a variable display size. Positioning the entire set as reflected on the box art measures more than 44cm high, 50cm wide and 33cm deep.