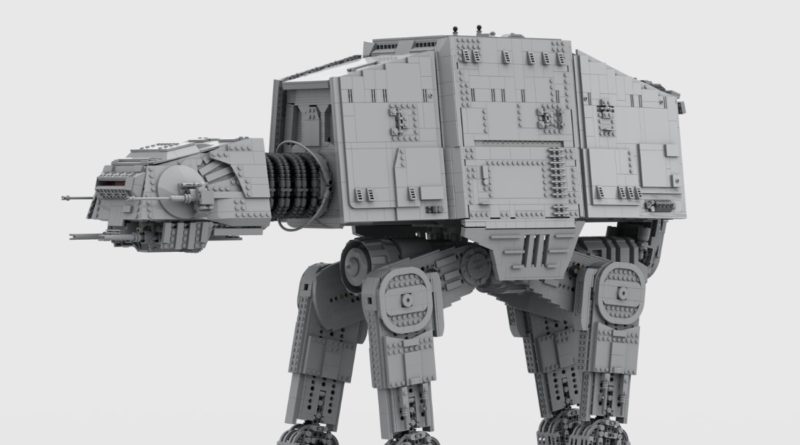 Rumours suggest we’re getting the first-ever LEGO Star Wars Ultimate Collector Series AT-AT later this year – but it probably won’t look as good as this one.

Designed by Gábor Vértesi-Nagy, this enormous take on the Imperial walker rings in at roughly 15,400 pieces, which automatically puts it beyond any realistic part count for an official set. (For reference, the LEGO Group’s largest Star Wars set to date remains 75192 Millennium Falcon, which includes 7,541 bricks.)

That’s the beauty of fan designs, though, which don’t share the same size or budget restrictions of retail products. And it’s what’s allowed Gábor to fully realise this Empire Strikes Back icon at such an awe-inspiring scale, standing 82cm tall in all, and weighing approximately 13.5kg.

“I wanted a fully-accurate model to the original from The Empire Strikes Back, and to give myself the smallest creative freedom,” the builder tells Brick Fanatics. “For example, the armoury wasn’t in the original walker as far as I know. The aim was finding the edge between an accurate model and playability.”

According to Gábor, designing the AT-AT’s legs was – perhaps unsurprisingly – the most difficult part of the build, mostly because he wanted them to be dynamic. The Hungarian builder, who’s an architect by trade, achieved that complex feat by inserting two gears into the knees: one static, and one flexible.

There’s also a full complement of 40 Snowtroopers (with room for each and every one), along with speeder bikes you may recognise as Brick Fanatics’ own design. It adds up to an incredible rendition of the Imperial walker, and one that the rumoured official UCS AT-AT likely won’t be able to live up to at just $800.

Of course, there is one factor Gábor’s model hasn’t had to contend with, and it’s a biggie where the AT-AT is concerned: stability. While the earliest renditions of the designer’s build were completed in physical bricks, he’s finished off the model in LEGO Digital Designer and Stud.io.

That means he can’t guarantee the walker could genuinely support its own weight in real-life – but based on his original physical models, the AT-AT’s Technic skeleton, a similar approach to the legs as Cavegod’s enormous interpretation of the walker, and a stability test run in Stud.io, Gábor says he’s ‘80%’ sure it would hold up.

For the official version, nothing less than 100% will be good enough – whether that’s through a separate support stand, or a solution to the legs that would allow them to stand on their own four feet. Time will tell (if the rumoured set pans out at all), but we’ll really take any chance to own anything even close to Gábor’s model.

If you’re after something a little more accessible in the way of a LEGO Imperial walker, 75288 AT-AT (review) is available now at LEGO.com. Or for a really wallet-friendly version, there’s always 75298 AT-AT vs. Tauntaun Microfighters (review).