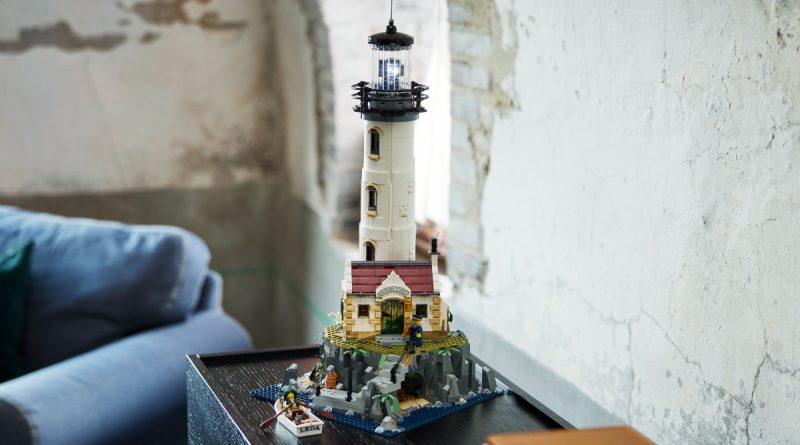 LEGO Ideas 21335 Motorised Lighthouse includes a few hidden and hard-to-spot details throughout the 2,065-piece set and its 54cm-tall build.

Light is undoubtedly an important part of any lighthouse, but the LEGO Ideas set doesn’t include only one. Instead, it uses two sources of light with one LED light running up the length of the lighthouse so it can spin at the top.

However, the cottage at the bottom also includes a small fireplace with another light brick to provide a warm atmosphere for the lightkeeper.

While the rocky base of the build is mostly used to contain the Powered Up pieces, there’s just enough room left for a treasure-filled cave.

It’s not the only detail on the island worth pointing out though, as a small beach holds an old anchor too.

There are several paintings inside 21335 Lighthouse referencing the history of it, including what could be previous lightkeepers.

One can be found on the third floor of the model, right in the middle between the cottage and the light and one in the cottage features a family standing in front of the lighthouse, perhaps they’re the previous lightkeepers.

It’s worth noting that there are no batteries included for the Powered Up elements in 21335 Motorised Lighthouse.

You might be ok with one of the light bricks though as LEGO sets with non=Powered Up light bricks traditionally have batteries installed in them ready to go.

There are a few stickers in 21335 Motorised Lighthouse including the design for the name of the boat.

However, the Aurora Point label on the cottage seems to be a new print since the design goes so close to the edge of the element.

The two minifigures included in 21335 Motorised Lighthouse are both new in at least one way with fresh face designs and the existing fisherman hat in a new dark green colour.

You’re welcome to add any other minifigures to 21335 Motorised Lighthouse too, with the Ferry Captain from 71034 Series 23 a good match aesthetically, but make sure his ferry doesn’t get too close to the rocks.