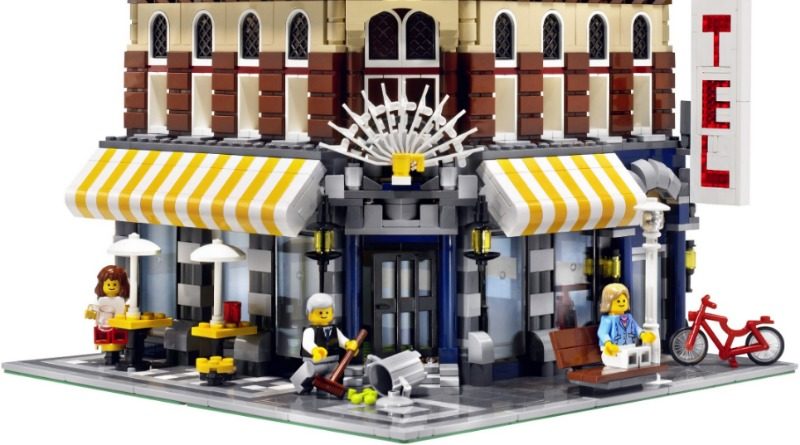 Brick Fanatics counts down the most valuable LEGO modular buildings released since the subtheme kicked off in 2007.

Acquiring a complete collection of LEGO modular buildings is easy – as long as you’ve been buying them annually since 10182 Café Corner arrived in 2007, that is. If you’re brand new to one of the LEGO Group’s most popular ranges, your bank account’s going to be in for a rough time, because some of the oldest models have risen exponentially in value since leaving shelves.

As the latest (and one of the greatest) modular buildings arrives on shelves in 10278 Police Station, we’ve dug into secondary marketplace BrickLink’s data to come up with the five most valuable examples from years past. These rankings are based on the current lowest price for a new, sealed copy of each set, which are obviously subject to change as the market fluctuates. At the time of writing, though, these are the modular buildings that you’re probably going to need to remortgage your own building to acquire.

Long before 10278 Police Station brought a LEGO CITY staple to the Modular Buildings Collection, 10197 Fire Brigade supersized another tried and tested emergency service – with astonishing results. This 2,231-piece ode to firefighters now fetches a pretty penny on the aftermarket, ringing in at more than three times its £99.99 RRP.

Expect the 2009 set to rise in price even more with the launch of 10278 Police Station, as collectors seek to expand their city’s emergency services beyond just law enforcement. All we need now is a modular hospital…

The third-largest modular building is also the fourth-most expensive to acquire at the time of writing. That’s reflective not only of its original retail price – £149.99 was the highest of any modular building to date in 2012 – but also its surprisingly early retirement in October 2014, just two and a half years after its release.

Most other modular buildings have shelf lives well beyond three years, so 10224 Town Hall’s premature departure meant many fans missed out, which probably explains its eye-watering aftermarket price.

The LEGO Group’s second official modular building – that is, not designed by fans – was the first to come furnished with a full interior. But that’s not the only reason it’s remained so popular – and in turn, so expensive to acquire.

10185 Green Grocer’s sublime exterior architecture makes plentiful use of rare sand green elements, including those 1×8 bricks that make it so tricky to part together on BrickLink. But it still works out cheaper than buying it outright, especially as it’s grown in value by a mind-blowing 700% since its retirement.

Believe it or not, the original modular building isn’t actually the most expensive to pick up new and sealed. But what’s perhaps more surprising is just how valuable 10182 Café Corner is today, particularly given it’s long been surpassed by more complicated and impressive designs.

The Modular Buildings Collection is most definitely not a case of ‘the original is always best’, but there’s clearly a soft spot among collectors for the set that started it all – even if it does pale in comparison to more recent entries in the series.

LEGO fans have argued long and hard over whether 10190 Market Street is an official part of the Modular Buildings Collection, but the LEGO Group confirmed as much in its designer video for 10255 Assembly Square. And that makes sense: while it might have been born of the short-lived Factory theme, which predated LEGO Ideas in delivering sets designed by fans, it adheres closely to the design principles and aesthetics of the wider series.

10190 Market Street also showed off the potential of the connectivity between the modular buildings in just the subtheme’s first year, arriving alongside Café Corner in October 2007. So while it’s perhaps not much to look at by today’s standards, it’s easy to see why the 1,248-piece model has appreciated so magnificently on the aftermarket – and why it will cost you a pretty penny to acquire now.

The lesson here is: if you’re after any particular modular building (or indeed, all of them), don’t hang about. Once they’re retired, they’re pretty much guaranteed to skyrocket in value.

Fortunately, you’ve got plenty of time to pick up the latest, 10278 Police Station, which will launch on January 1 at LEGO.com. Check out our full review here, along with five of its best techniques, how to place it in your wider street, and where it ranks among the largest modular buildings to date.