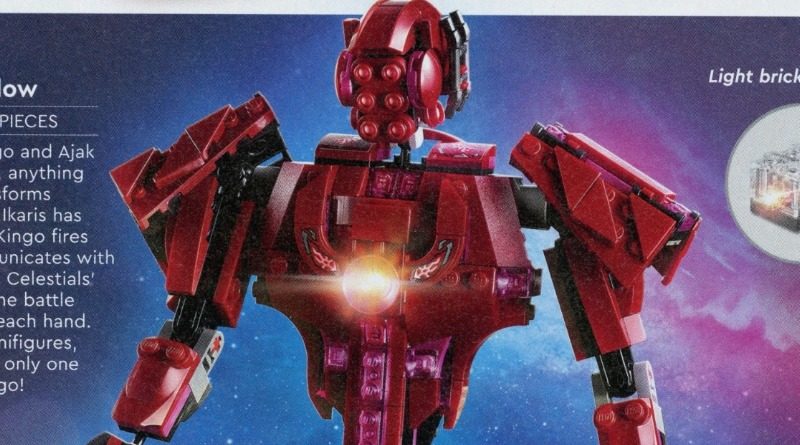 Better images of the new range of LEGO Marvel Eternals sets have popped up online, giving us a closer look at what’s coming in 2021.

The first pictures of the sets landed online a couple of days ago, by way of a Canadian LEGO catalogue, but they felt a bit like peering at the models through someone else’s glasses. Fortunately, Brickset has now published full scans of the catalogue’s pages, giving us a much clearer view of the new range.

There are four new sets in total: 76145 Eternals’ Aerial Assault, 76154 Deviant Ambush, 76155 In Arishem’s Shadow and 76156 Rise of the Domo. They’re all based on the upcoming Eternals movie, which is currently scheduled for release in November 2021.

If you’re wondering why the LEGO sets are arriving so early, it’s because the Marvel Cinematic Universe Phase Four film was originally set to premiere in February 2021. But then COVID rolled in and changed all that, pushing back major tentpole releases. (We’re still waiting to see Black Widow, for instance, which was supposed to premiere in May 2020.)

Unless you’re an avid Eternals comic book fan, then, you’ll need to turn to the internet to get a decent grounding in the new characters, which represent a first for both the MCU and the LEGO Group. Names like Ikaris, Sersi, Ajak and Kingo might seem alien to you now, but by the time November rolls around they’ll probably be as familiar as Doctor Strange, Captain Marvel and Black Panther.

The new images also give us a clearer look at the descriptions for the sets, which prove what we’ve long suspected: the LEGO Group knows you just want minifigures.

There’s no confirmed release date for the LEGO Marvel Eternals sets, but given they’re already appearing in a catalogue, they can’t be too far off. We reckon they’ll land February 1, marking the same month as the movie’s original release date, but we’re just guessing there. We’ll keep you updated on the official launch date as soon as we hear it.