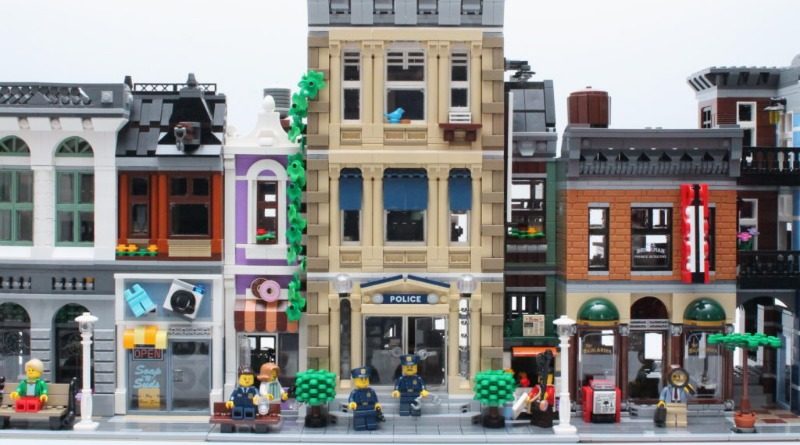 10278 Police Station boasts all the brilliant design techniques and architectural innovation we’ve come to expect from the LEGO Modular Buildings Collection – but how does it fit in with previous entries in the long-running series?

The latest model in the widely-celebrated LEGO Modular Buildings Collection will launch on January 1. You can read our in-depth review of the set here, but suffice to say it’s another home run from the LEGO Group.

The question is: how does it look next to older modular buildings? These annual staples of the Creator Expert (now 18+) theme are supposed to sit in harmony, after all. To find out, we’ve grabbed a selection of past entries in the series and lined them up next to 10278 Police Station.

When the police can’t crack the case, you might choose to hire a private detective. Fortunately, you can have one right next door with the modular buildings, in what’s presumably the crime-fighting district of your LEGO city. And they genuinely look great together, no matter which way round you place them.

We reckon Al’s barbershop sits best next to the doughnut shop, though, and avoids the complication of a newspaper dispenser taking business away from the adjacent newspaper kiosk, in what’s probably the most analogue version possible of robots taking our jobs. You’ve got to think these things through when you’re assembling a LEGO city…

2016’s ornate building sits very comfortably either side of the Police Station, but for our money, it’s best orientated so the laundrette sits next to the doughnut shop. They’re both narrower buildings, and the dark orange of the laundrette’s first floor pairs surprisingly well with the doughnut shop’s lavender.

If you do choose to place 10251 Brick Bank on the other side of 10278 Police Station, though, you’ll have few complaints. In fact, you’ll essentially have created a magnificent municipal district for your city, as long as you’re happy to imagine that the bank isn’t commercially-owned. These are the things you should probably think less about when building your own LEGO city.

10264 Corner Garage (and its immediate predecessor 10260 Downtown Diner) occupy a strange space within the modular building line-up. After years of 1920s-1940s architecture, the ambitious entries tried to bring the Modular Buildings Collection forward to the 1950s.

They weren’t met with overwhelming positivity from veteran fans, though, and it seems like the LEGO Group has reverted back to pre-’50s architecture in the years since. That may explain why 10264 Corner Garage isn’t the best fit next to 10278 Police Station. Then again, it’s testament to the design prowess of the latest modular building that even if these are your only two modular buildings, they still look just fine together.

You’ll probably already know from 10278 Police Station’s press images that the newest and previous modular buildings sit very nicely together. But because 10270 Bookshop is actually two separate buildings, there are far more configurations available when pairing it with even one other set.

Check out the gallery above for four of those layouts. The clashing lampposts and birch tree make positioning this one tricky, but they’re not fixed in place, of course. If you’re determined to leave the sets as they come in the box, then the most logical option is placing them in this order: bookshop, town house, police station. But if you’re happy to shift around some street furniture, Birch Books looks great adjacent to the newspaper kiosk.

There are 11 other modular buildings to pair 10278 Police Station with – and in more expansive layouts than just two buildings side-by-side, depending on your available space. But these snapshots should at least give you a taste of what’s possible with the latest modular building, and why we’ve praised the model so much in our review.

10278 Police Station will launch on January 1. You can support Brick Fanatics by purchasing it through our affiliate links.