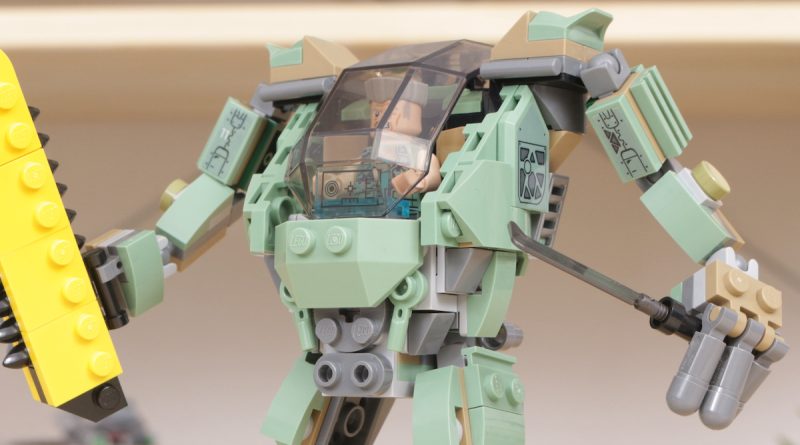 LEGO Avatar 75571 Neytiri & Thanator vs. AMP Suit Quaritch is a great set, but that doesn’t mean the mech AMP suit included can’t be even better.

As far as the new LEGO Avatar range is concerned, colour us more than pleasantly surprised by the quality, playability and all-round appeal that the four System sets in particular offer. For being based on a film that most of us won’t have watched since it came out in 2009 and who, by this stage, aren’t overly bothered by the impending four more instalments of the franchise to come, this mini-selection of sets provides an authentic refresher of all that was genuinely interesting about Pandora, futuristic military and big blue cats, and kind of has us now looking forward to more…

Of this first wave of Avatar sets, 75571 Neytiri & Thanator vs. AMP Suit Quaritch stands out as best representative of the play potential that a brick-built Pandora holds, for striking the finest balance between the clash of nature and machinery that takes place, and at the best value price too.

That being said, LEGO is there to be played with and built upon and, once you play around with the AMP suit a little more, you notice a couple of shortcomings to tackle. First up, in comparison to how it looks in the film and to how it acts as a highly mobile mech in combat with Neytiri (which 75571 Neytiri & Thanator vs. AMP Suit Quaritch replicates), the LEGO AMP suit’s arms are really too short.

They can barely reach around the front of the mech, let alone each other, and let alone reflect the range of movement that is seen on screen (and in the below clip). If you were to put together a version of the machine gun that is missing from the set (though, curiously pictured in the instructions via a screenshot from the film) then there’s currently no ability to hold it with both arms, as it would otherwise be.

The second possible fix is centred around how the manoeuvrability of the legs is surprisingly limited. This will be due to the potentially top-heavy nature of the LEGO AMP suit model, as there are a handful of pieces you can clearly see that are in place specifically to prevent the hips swivelling too far forward, back or outwards.

However, a couple of changes to address both areas later, and the mech is truly transformed. These are rudimentary fixes, but you can see how a) adding a stud’s length to both sections of the arms (and changing the fingers a little bit) can pull the LEGO model much closer to the source material, and b) removing just a few pieces around the hips can offer a world of movement to the legs.

Likewise, if you’re going to give an AMP suit a knife to use, as it was in the Avatar film, then scale it to the suit, as it was quite comically done on screen. For that, the recent NINJAGO sword from the Master of the Mountain-inspired sets serves perfectly.

These fixes aren’t necessarily the only way to play around with the design of the LEGO AMP suit from LEGO Avatar 75571 Neytiri & Thanator vs. AMP Suit Quaritch, but you can see the options they present for display and play, both obvious and subtle. From what the arms can do to the angles that the mech can stand at, these changes are quick but offer a slightly more authentic feel to the design.

In what ways would you rebuild the AMP suit from LEGO Avatar 75571 Neytiri & Thanator vs. AMP Suit Quaritch?

Support the work that Brick Fanatics does by purchasing your LEGO Avatar sets via one of our affiliate links – thank you!