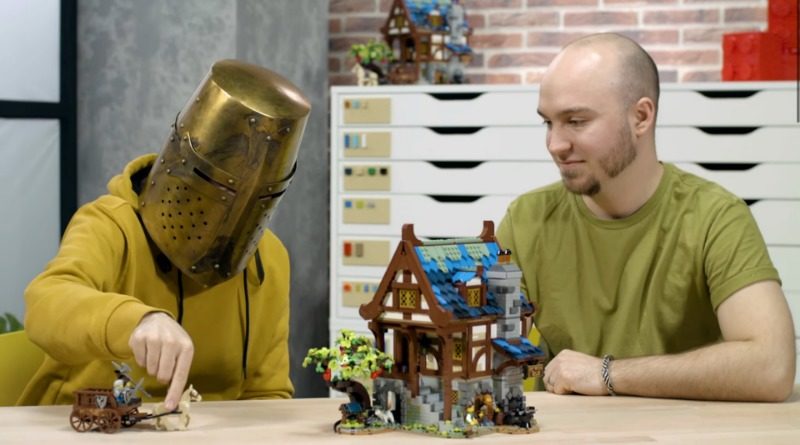 The designers of 21325 Medieval Blacksmith say they’d love to do more ‘medieval modulars’ in the same style as the latest LEGO Ideas set.

Speaking during a recent roundtable interview with Brick Fanatics and other LEGO Fan Media, Wes Talbott and Austin Carlson discussed their childhood love of LEGO Castle, how Clemens Fiedler’s Medieval Blacksmith fulfils a long-held fantasy, and the ideal follow-up sets they’d like to design.

If you haven’t yet assembled 21325 Medieval Blacksmith, you might not know that it takes its design cues from the Modular Buildings Collection. We’re not talking about the boxy architecture and Technic pins that hold together sets like 10278 Police Station and 10264 Corner Garage, but the separate, removable floors that are connected by just a handful of studs, allowing for access to the enclosed building’s interior.

German LEGO fan site Zusammengebaut asked the designers whether they’d be keen to repeat the process of designing 21325 Medieval Blacksmith in a new series of medieval modular buildings, and Wes responded emphatically.

“I would absolutely love to do that,” he said. “That’s one reason I really was hoping to get to work on this one, because [when I joined] the LEGO Group seven years ago, I immediately came to Jamie [Berard] and was like, ‘We’ve got to do modulars in a medieval style,’ and I think this is the closest we’ve been able to get to that.”

Both designers also spoke briefly about the LEGO Castle sets they owned as kids, and which ones they’d like to revisit in a potential modern-day resurrection of the classic LEGO theme.

“I think the classics, a tavern or an inn, would be really great,” Wes said. “I’m also the type that prefers a little bit more whimsy and fantasy, so more Arthurian legend-style castle, where dragons and wizards can exist, would be awesome. Also, I’m a D&D nerd, so I just want to have my miniature village all planned out with all the major locations for adventurers to visit.

“As a kid, I didn’t have any of the big castles. I only had all the little small sets with the knights and stuff. So I’m super excited to do any of them, but I think especially 6086 Black Knight’s Castle. I really liked the layout of that one, [so] I think that could be a cool one to try again. And also just anything Forestmen – I’m a sucker for plant life mixed with medieval architecture, so any of those would be awesome.”

Any update of 6086 Black Knight’s Castle would require a seriously large part count, given the original set included a 3D baseplate. But looking back at that 1992 set, it’s not difficult to see why Wes loves it so much – the colour scheme is great, it’s packed with minifigures, and there’s even a hint at the same half-timber architecture you’ll find in 21325 Medieval Blacksmith.

Austin’s choice calls back even further than the early ’90s, however, to the very dawn of LEGO Castle in 1978.

“I was also similar to Wes where I had a lot of smaller Castle sets, usually just the minifigure packs for the most part,” he explained. “I was a big fan of Wolfpack, because that was probably the most that I could get at that time. But the further into the fandom I get and the more I reflect, I would honestly like to do a take on the yellow castle [375 Castle], because it’s probably not just the most iconic [set], but it’s the most allowable for interpretation.

“One of the fun things that I’ve always had was talking with other co-workers that also come from the fan [community], and seeing how so many of them see different things in such a simple set. And I think that’s such a cool thing about classic LEGO – how did you see this differently as a child to other people growing up with that set? So, yeah, that would be the one for me.”

For more insight into how 21325 Medieval Blacksmith came together, check out how the Ideas team brought it from concept to reality, why they brought back the Black Falcons, and how they tried to resurrect the goat. For a closer look at the set itself, click through to our in-depth review, then find out how the LEGO Group could use it as a springboard for the return of Classic Castle.

You can order your own copy of 21325 Medieval Blacksmith from LEGO.com right now, and support Brick Fanatics while doing so by using any one of our affiliate links.