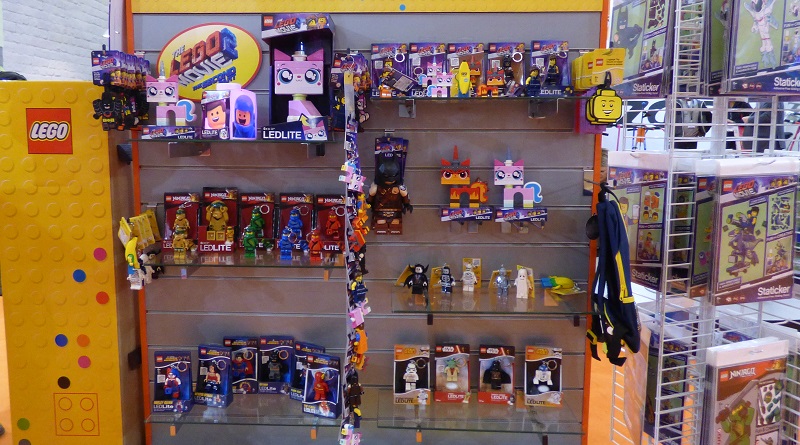 London Toy Fair has seen a new range of The LEGO Movie 2: The Second Part lights and wall decals launched, ahead of the film’s theatrical release.

The best place to find upscaled LEGO minifigures and characters is in the range of light products that offers easy gifts for LEGO fans. At London Toy Fair 2019, the latest licensed LEGO products were unveiled, with a selection of new items based on The LEGO Movie 2: The Second Part.

Key chain LED Lites feature some of the core characters from The LEGO Movie 2: The Second Part – Emmet, Batman, Rex Dangervest, Uniktty and Angry Kitty. Lucy and Sweet Mayhem have not been announced for the range, but their omission is surprising.

A selection of luggage tags based on The LEGO Movie 2 feature Emmet, Batman, Unikitty and DUPLO invaders.

Large Unikitty lights offer different sizes of the cat-unicorn combo character. Two of them show her in her regular or angry moods in the usual standing pose, with a sitting pose also available. Her horn lights up in a colour relevant to her mood.

One Batman light features the character’s head only, with light up eyes, designed to be fixed to a wall. Another torch product is a full upscaled minifigure of the character, matching the real version aside from the big shoulder element. Emmet is also available in that style.

A squeezy LEGO brick light lights up in different colours after being pressed and features a different character face on each side.

Statickers are a new range of decals that attack to the wall without actually sticking permanently. They use static to cling to the wall, and can then be easily removed. The majority of the designs are based on The LEGO Movie 2: The Second Part, with other LEGO themes also due to be included in the range.

This range of The LEGO Movie 2: The Second Part products will be available soon from Amazon.