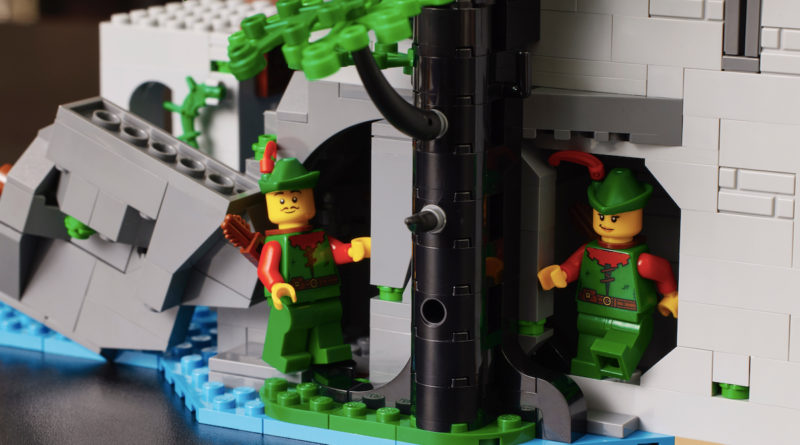 The recently announced 10305 Lion Knights’ Castle has a number of exciting features for LEGO fans to look forward to.

Fortunately, an initial look at the set suggests you’re getting your money’s worth. Given its nature as an anniversary model, there are numerous references to the past for you to seek out. Some of the most obvious include:

Across multiple LEGO themes, minifigure-scale shields have appeared with a variety of attractive patterns on them. This LEGO set is no exception, with some deep dives into LEGO’s past.

The armoury on the upper levels contains shields from the earliest days of the Castle theme. The red and white blocked design can be seen in models like 677 Knight’s Procession, released back in 1979. It’s unclear if the crossed axe design ever appeared on a shield, although sets such as 6022 Horse Cart (released in 1984) features it on minifigure torsos.

Several different versions of the Lion Knights have appeared over the years, but the version here also appears to date back to 1984. The Black Falcons (who debuted in this year too) make an appearance in this set, although their shields appear to draw inspiration from the 2012 set 10223 Kingdoms Joust rather than the 1980s original. However, their blue and black outfits are definitely a retro throwback.

The castle’s playroom contains a tiny yellow castle. This is a clear reference to sets like 375 Castle, which appeared in the theme’s debut in 1978. Its red drawbridge is also retained using a simple tile.

The yellow castle has proven a popular choice of throwbacks for the LEGO Group over the years. It was rereleased in 1981, and smaller versions of it have reappeared in commemorative LEGO sets since then. The most recent example of this is 11021 90 Years of Play, a Classic set also released for LEGO’s 90th birthday.

3 – A black tree for the Forestmen

Several different factions appeared in earlier Castle sets, with the Forestmen offering some of the more unique environments. While most minifigures of this era made their homes in man-made structures, the Forestmen built smaller structures around large black trees. This helped to set the (admittedly shortlived) subtheme apart from its fellows.

40567 Forest Hideout (currently available as a LEGO.com promotional item) lovingly recreates one of these original sets, but a smaller version can also be found in this set. This is a nice way of integrating the Forestmen into a set they would typically be absent from. Product images show a hideout is concealed within its roots, suggesting the Lion Knights need to keep a beadier eye out.

Early Black Falcon LEGO sets typically featured knights with black helmets, in a fitting tribute to their name. However, the original black helmets fell out of production as years went by. Recent sets to feature the Black Falcons (like 31120 Medieval Castle) features Falcon knights with silver helmets instead. The result isn’t unattractive, but it’s a disappointing oversight.

Fortunately, it’s one that 10305 Lion Knights’ Castle remedies. Two of the knights feature the classic black helmets, while the horseback rider features the more detailed helmet from 10223 Kingdoms Joust instead.

1 – The castle can be folded up

Several castles in the Castle theme had hinged sections integrated into their walls. This allowed them to be displayed as an enclosed structure or mimic the walls of a much larger building instead. 10305 Lion Knights’ Castle retains that feature, which – given the level of detail in it – is perhaps to be expected.

As such, you can display the set in one of two configurations depending on your preference. However, the set reportedly measures 38cm high, 44cm wide and 33cm deep when it’s folded up. From that perspective, displaying it open may prove a challenge of its own.

10305 Lion Knights’ Castle will be available for general purchase at LEGO.com from August 8. However, LEGO VIPs can acquire it from August 3rd.