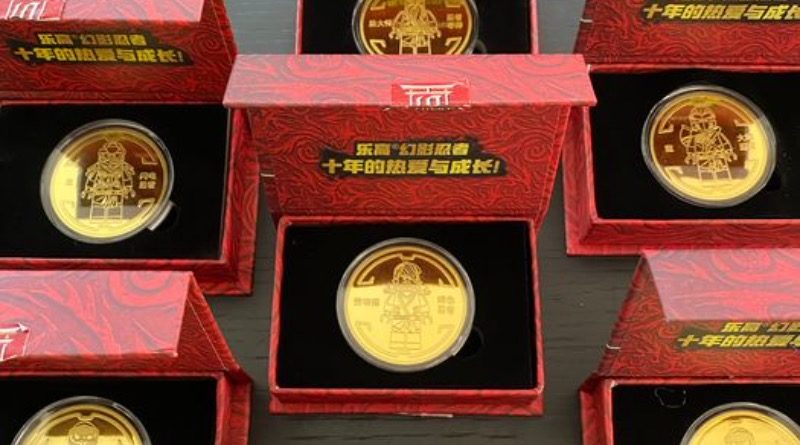 An ultra-rare set of exclusive LEGO NINJAGO 10th anniversary collectible coins is up for grabs at Catawiki.

Brick Fanatics has partnered with Catawiki to showcase some of the auction website’s most extraordinary LEGO-related listings. This week’s highlights include prototype Batman minifigures, a vintage LEGO sign from the ‘70s and probably the rarest LEGO coins to ever exist.

If you’ve transcended traditional sets and minifigures and are now in the market for some truly one-off LEGO rarities, Catawiki has you covered.

If you thought the Classic Space VIP Collectible Coin was hard to come by, you ain’t seen nothin’ yet. These gold LEGO NINJAGO coins – produced to commemorate the theme’s 10th anniversary in 2021 – were distributed exclusively through LEGO Stores in China and Hong Kong, and are incredibly rare in Europe.

There are seven coins in total, but unlike the VIP Collectible Coins, you don’t need to hunt them down one at a time. Instead, you can bag the entire collection in one go through one of this week’s Catawiki auctions. The price currently stands at €575, with the platform’s experts estimating a final sale price of €660 to €860.

The only complete set available on BrickLink right now will set you back $820 (or roughly £593), so if the Catawiki auction comes in at the lower end of that estimate, you could be looking at a relative bargain – and potentially a very sound investment, given how high the price of even the VIP Collectible Coins has soared. LEGO fans must really love coins.

Proving LEGO Batman doesn’t solely work in black and very, very, very dark grey, these prototype Caped Crusader minifigures cast the superhero in vivid translucent colours. The seller has a whole bunch up for grabs in individual lots, which you can find by browsing Catawiki’s weekly auction list.

If you’re doubting the veracity of these minifigures – and given the prices they’re going for, you’re right to be wary – the close-up images will hopefully be somewhat reassuring: each piece is moulded with the distinctive LEGO logo found on all genuine parts, suggesting these elements have indeed come straight from the factory.

According to the seller, that’s specifically the Mexican factory, where these trans-light blue, trans-pink, trans-purple (and so on) minifigures were produced in ‘very limited batches’. They’re going for anywhere between €20 and €47 at the moment, so get your bids in quick if you want to add any of them to your collection.

This shiny, plexiglass sign was originally produced for use by independent sellers in the 1970s, either as storefront advertising material or on shelves. It measures 20cm by 20cm, and even has its original, unused adhesive strip on the back (although the seller notes time will likely have curtailed its sticking power).

Apparently found among the collection of an old LEGO ambassador, the sign is currently going for just €44 at Catawiki, with no reserve price. And with only two days left on the auction at the time of writing, you could be looking at a relatively cheap way to add a little flair to your LEGO room. What better way to combat all those tired jokes that you have enough LEGO to set up a shop?

Head over to Catawiki to check out all of this week’s LEGO listings.