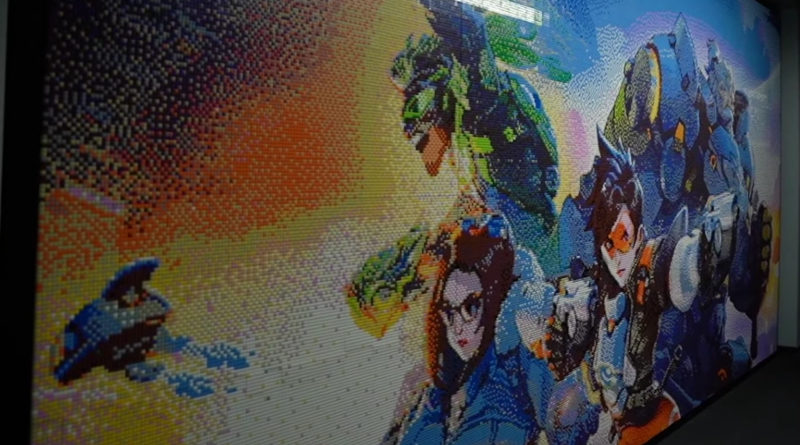 Although there were no LEGO Overwatch reveals at the first day of BlizzCon, it appears that the LEGO Group still managed to find a way into the event.

Blizzard’s latest online convention begun yesterday with an array of reveals for many of its games, merchandise and more. Some of the more eagle-eyed amongst you may have even noticed a cameo from what looks like a certain plastic brick towards the end of one panel.

Near the finish of the ‘behind the scenes of Overwatch 2’ panel, a glimpse at the development studio was revealed, with clips of workspaces, wall art and more shown. However, among the art installations was a floor to ceiling mosaic of some pixelated key art from the sequel. Thankfully, a closer shot of the artwork is shown revealing more details.

When looking at this better view, it seems that the pixels appear to have cylindrical bumps on each of them. Of course, we’ve seen such a design before and it appears that this particular artwork is an enormous LEGO mosaic.

Although it may appear to be made of LEGO bricks, it should be stated that there is no confirmation that these pieces are from the LEGO Group and not a rival brand, but considering the relationship and past sets with the companies, it seems likely that these are indeed the iconic bricks.

With the LEGO Overwatch theme seemingly cancelled it might be strange to see the relationship between Blizzard and the LEGO Group continuing in any form, and this might just be a commission or gift from one company to another. However, with the rumour of one more LEGO Overwatch set this does bring about the ongoing question of whether the theme will return for the sequel.

For now, we can only wait and see, but the LEGO Group has created similar-sized builds before to promote the theme.