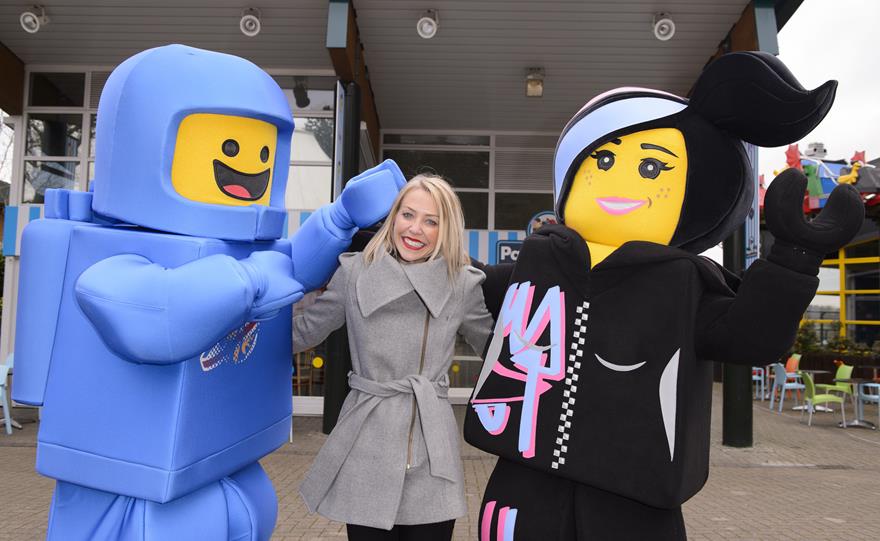 Personalities including the spicey Emma Bunton, The X-Files’ Gillian Anderson, Mr Selfridge’s Katherine Kelly and broadcasters Ben Shephard, Matt Baker and Kate Garraway were treated to the first viewing of the 12 minute short film which sees Emmet, Wyldstyle and the gang pitted against a brand new villain, Risky Business in a riotous, action-packed plot set in a theme park made entirely of LEGO. As well as amazing 3D animation, the story is further brought to life with a range of 4D elements from wind, water and smoke to special lighting effects all perfectly choreographed to what’s happening on the screen.

Kate Garraway, gave it a five star rating and said, “I now know what 4D is! It’s like you’re actually in the movie. It was incredible.” Stacey Solomon agreed saying, “The film is brilliant, my favourite character is Unikitty – she is just like me, I totally live in a Unikitty world.”

They were joined on the red carpet by DJ and presenter Sara Cox, Bake Off champion and cookery writer Nadiya Hussain, singer Claire Richards and popular actresses Tamzin Outhwaite and Angela Griffin..  Some of the country’s leading film critics were also in attendance and early reviews suggest that the LEGOLAND Windsor Resort has a massive hit on its hands.

Developed in collaboration with LEGOLAND owner Merlin Entertainments Group and Warner Bros. Consumer Products, the attraction was created by Los Angeles-based Pure Imagination Studios with input from Phil Lord and Christopher Miller, the talented writer-directors who brought “The LEGO® Movie™” to life, along with producer Dan Lin.

“The LEGO® Movie™ 4D A New Adventure” will play daily at the LEGOLAND Windsor Resort’s ‘The LEGO 4D Movie Theatre’ throughout the 2016 season and all year round at the LEGOLAND Discovery Centre in Manchester. For further information and screening times go to www.legoland.co.uk and www.legolanddiscoverycentre.co.uk