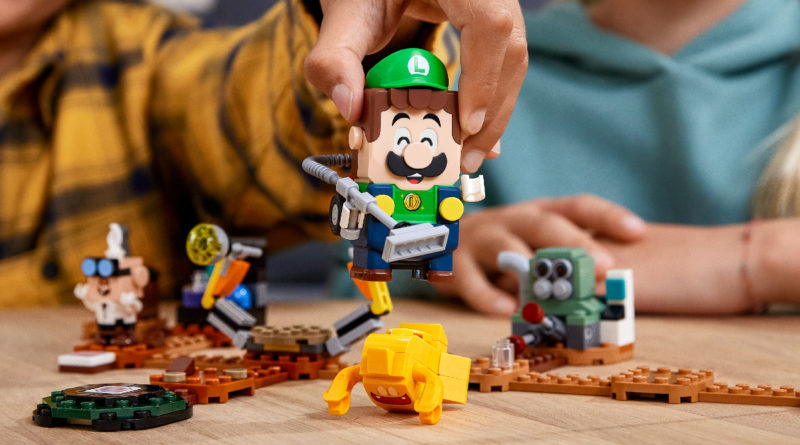 LEGO Super Mario is expanding in 2022 with a new range of models themed to Luigi’s Mansion, and we’ve found a few details in the three sets.

With three games in the Luigi’s Mansion series, the LEGO Group have a wealth of inspiration to draw from for these upcoming models, with many characters, accessories and enemies to choose from.

You can read more about the official reveal of the LEGO Luigi’s Mansion builds in our initial report here but otherwise, here are five things we found in the fresh subtheme.

Included in the smallest set of the January 2022 wave, 71397 Luigi’s Mansion Lab and Poltergust Expansion Set, is the Poltergust 3000, a device that debuted in the first game of the series. This brick-built recreation seems to attach to the back of the overall element.

Featured beside the LEGO Poltergust are a variety of attachments calling back to the games, such as the flashlight and what looks to be a pair of plungers or at least a model that can be repurposed as them to fire at ghouls.

With LEGO Super Mario now representing a new series of games for the theme, it also comes with at least three new named characters in the form of Bogmire – a boss from the first title – as well as Polterpup and Professor E. Gadd, who are both recurring allies throughout the games.

These are all represented on the same scale as the other Super Mario figures, with Polterpup also including a new piece for their four ghostly legs. E. Gadd also includes a printed piece for his lab coat, which may be useful if you’d like to give the LEGO Toad in 71401 Luigi’s Mansion Haunt-and-Seek Expansion Set a new career.

Speaking of the Toad in 71401 Luigi’s Mansion Haunt-and-Seek Expansion Set, the character is trapped in a portrait prison, a popular method of trapping Luigi’s brother and his other friends throughout the series.

This module of the largest set in the wave is also interactive with the LEGO Luigi controller figure, with a scannable tile located underneath Toad for once they are freed. It’s not yet clear what this will do, but it may grant coins or another kind of bonus.

The King Boo figure from 71377 King Boo and the Haunted Yard Expansion Set has not been repurposed for this new wave, with the design for the character differing between the main series of Super Mario and Luigi’s Mansion.

The updated design features a purple tongue and glowing pink eyes, with a gem now located on his crown instead of the red element that was placed upon it before. The new King Boo comes in 71401 Luigi’s Mansion Haunt-and-Seek Expansion Set.

As part of the LEGO Super Mario Luigi’s Mansion 2022 models, the app will likely be updated to recognise the builds and the provided lifestyle images for the sets suggest that Luigi will also be getting new additions too.

To accompany the 2022 creations, LEGO Luigi will receive at least one new reaction themed to his spooky surroundings. The image included above shows Luigi with glancing eyes that are similar to his classic cautious pose seen throughout the Luigi’s Mansion games.