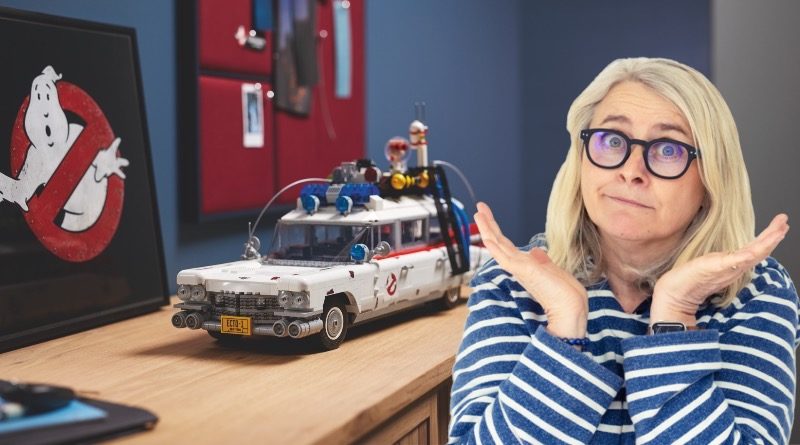 Author and screenwriter Emma Kennedy explains how giving viewers a say in your LEGO YouTube channel can help to build a consistent audience.

Finally, I am building a car. We operate as a semi-functioning democracy over at Relax With Bricks, whereby as I’m coming to the end of each build I give the AFOLWACs (Adult Fans of LEGO Who Are Chums) four options to choose from as to what they’d like to see me tackle next.

A tremendous man called Professor Lego (he’s also in charge of a regular Bricks and Pieces section we do, where he roots back through the mists of LEGO time and tells us everything we’ll ever need to know, and more, about any given piece I think we haven’t had before) will then put those choices to a vote, and hey presto, we have our new build.

I’m sometimes not entirely straightforward – this month I offered up ‘birthday surprise’ (I was given a large set for my recent birthday and kept schtum as to what it was), silly build (I’ll get to that), 76191 Infinity Gauntlet and 75308 R2-D2, who has been languishing in the shed for some time now, hoping beyond hope that he is, finally, the droid we’re all looking for.

Well, not this time dear old pal, because the AFOLWACs chose – by quite the margin – to plump for the birthday surprise. It’s 10274 Ghostbusters ECTO-1, of course.

A few months ago, I was surprised by a parcel arriving addressed to the LEGO shed, the place where I do all my builds. It was from a tremendous AFOLWAC called Tim, who had taken it upon himself to send me The LEGO Movie 2’s 70828 Pop-Up Party Bus. It’s a set I would never have thought of getting, and it turned out to be one of the funniest and more enjoyable builds we’ve ever done.

It also sparked a conversation amongst the AFOLWAC gang about smaller sets it wouldn’t occur to us to get, but which end up being entirely brilliant. I think it’s fair to say, that little Party Bus knocked us all for six.

With this in mind, I virtually popped into the LEGO Store and bought a handful of smaller ‘silly’ sets. We did one last week, as a break between 21327 Typewriter and the ECTO-1 – it was 75550 Minions Kung Fu Battle, and despite its size, came with three moving parts. It was an absolute triumph.

Smaller, highly colourful sets whose dials are set to pure fun, it turns out, are just as suitable for AFOLs as serious display pieces. I’ve now got a clutch lined up against the wall of the LEGO shed, all secret, ready to explode on to Relax With Bricks when the time comes.

The other vote we like to have is what the Goose Giveaway is going to be on Live and Bricking, the once-a-month live show I do on the Relax With Bricks YouTube Channel. It’s mayhem. I try to build something within an hour while cramming in Poo Bingo (yes, you read correctly, you can Google it, it’s real game) and the monthly draw, where anyone who has Goosed up (Gooses are the people who have become Patreon of RWB) has a chance of winning a set.

Last month I gave away the Creator 3-in-1 31120 Medieval Castle; this month I’ll be giving away 21327 Typewriter. The Poo Bingo winner gets a prize, too – often whatever I’m attempting to build and a handful of small bits and bobs.

It’s all the usual fun I work hard to make Relax With Bricks be, but the important bit is that giving viewers a chance to be part of the decision process helps them to invest in what we’re doing. I dedicate a lot of time to making RWB – I invariably do an hour’s film every day – but the AFOLWACs dedicate a lot of their time to watching it.

It’s essential we all feel a part of what is going on and that everyone, whether they’re a vocal part of the gang or a silent watcher, has an equal say. So what will the AFOLWACs vote for next? *side-eye to R2-D2* One day, little fella, one day….