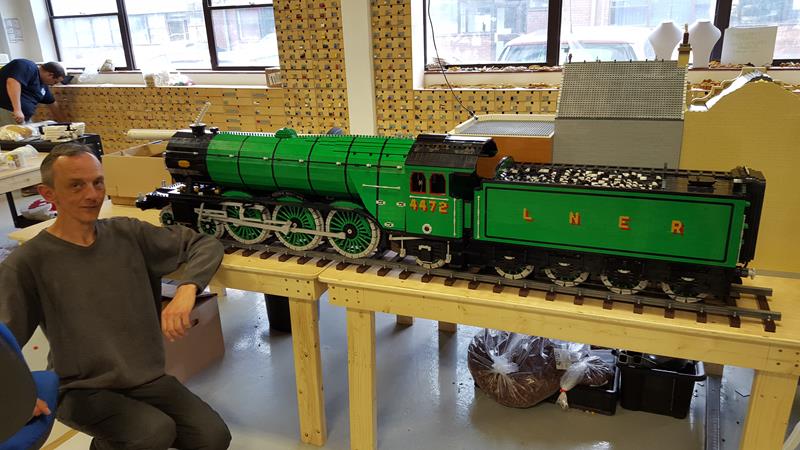 Travel back in time and discover models which bring to life some of Britain’s most important historical turning points in a brand new children’s LEGO exhibition this Summer.

Containing over half a million individual LEGO bricks, Bricks in Time: Hands on History in LEGO has been developed in partnership with Bright Bricks, founded by Duncan Titchmarsh, the only professional LEGO maker endorsed by LEGO in the UK.

The centrepiece of the exhibition features an 8 metre long model of the nation’s favourite locomotive The Flying Scotsman, which returned to the UK’s mainline this year after a £4.2 million refurbishment. This brand new model by Bright Bricks took over 550 hours to build from approximately 100,000 individual LEGO bricks, forming the centrepiece of this brand new children’s exhibition.

Ed Diment from Brights Bricks said ‘We’ve worked on LEGO projects of all shapes and sizes over the years. This new model of the Flying Scotsman is quite possibly the loveliest thing we’ve ever made from LEGO. We’ve used the inside of the carriages to tell a story and imagine what life was like when the train was first in service.”

“It’s an excellent opportunity to see it on display at the Rheged Centre as this historic train returns to service this summer.”

The exhibition is being held at the Rheged Centre’s award winning gallery, located at the northern gateway to the Lake District at Penrith, Cumbria. It runs from Saturday 9 July – Sunday 4 September, open 10am – 5pm daily.

With over 25 models on display, visitors to the exhibition will also discover a giant diorama of Saxon life, a model of Beatrix Potter and her creations, a 2 metre long model of HMS Victory, Tudor Monarchs, The Golden Hind, a Viking longboat and a large model of Lowther Castle, all bustling with minifigs and LEGO characters dressed in period costumes, alongside many others.

Young LEGO enthusiasts can bring history to life with a range of hands on activities inspired by the surrounding models in the exhibition, from racing a wind powered train, creating a model for the zip wire, to constructing catapults and creating family portraits in LEGO.

Throughout the summer holidays, the Rheged Centre will be running daily activities inspired by history and LEGO. Young LEGO fans can make and take home their very own miniature Flying Scotsman LEGO model, customise a minifig, learn basic programming with a LEGO Mindstorms workshop, alongside other LEGO and history inspired craft workshops. There’s also a LEGO sculpture spotters trail to explore around the centre, and a 13 metre LEGO Hadrian’s ‘Grafitti’ Wall, where you can write your name in LEGO.

For the full programme, and to book workshops and activities online from July 2016, visit the Rheged Centre website at Rheged.com.

New for 2016 in Rheged’s Toy Shop will be the largest selection of LEGO in Cumbria, with a selection of the most recent ranges where futuristic worlds meet medieval kingdoms – LEGO Nexoknights, LEGO Ninjago, LEGO Starwars, including the brand new 2016 Millennium Falcon, and LEGO Friends.

The Bricks in Time: Hands on History in LEGO exhibition runs from Saturday 9 July – Sunday 4 September, 10pm -5pm daily. Entry to the exhibition is £2.50 (3’s and under go free). Booking is not required.

For further information visit: www.rheged.com or pick up a brochure from the Rheged Centre, Redhills, Penrith, Cumbria, CA11 0DQ