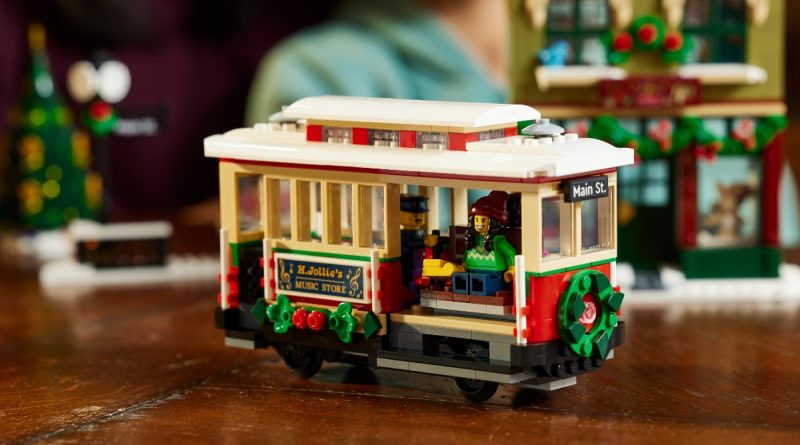 10308 Holiday Main Street features the most recent version of a LEGO tram but these rarer brick-built vehicles have appeared elsewhere too.

For as much as the LEGO design teams love vehicles, trams are something of a rarity in the wider catalogue of LEGO sets. However, 10308 Holiday Main Street may be the most recent appearance of a LEGO tram but it’s not the first.

While we wait for the release of 10308 Holiday Main Street, here’s a rundown of four other LEGO tram appearances, one of which you can still get your hands on to provide another form of public transportation in your LEGO display.

Thanks to the alternate build concept that makes up LEGO Creator 3-in-1, there have been two LEGO Creator 3-in-1 sets that include trams as an extra option aside from the main build. In 2008, 4837 Mini Trains included a small tram inspired by a traditional design but it wasn’t big enough for a minifigure to fit inside.

This was later rectified in 31097 Townhouse Pet Shop & Café from 2019 with an alternate build depicting a much larger LEGO tram as well as a street, similar to 10308 Holiday Main Street.

The LEGO Group’s first Spider-Man sets in 2003 mark the first appearance of a LEGO tram thanks to an alternate model that you could make using 4852 Spider-Man vs. Green Goblin – The final showdown.

Its red design is striking compared to the yellow, tan and grey in the rest of the build and there’s room for two minifigures inside.

DUPLO has also been home to a tram, though it’s very different from any other on this list.

The LEGO Group’s Thomas the Tank Engine range of sets included 5555 Toby at Wellsworth Station in 2005, making it one of the earliest LEGO trams and the only DUPLO tram.

With a host of more modern designs, LEGO CITY has been home to the most trams in the history of the LEGO Group with 8404 Public Transport Station, 60097 City Square and 60271 Main Square each including one tram.

All three have shared a very similar appearance, with windows lining the sides and one larger, curved piece at the front to provide maximum visibility for the driver. These trams could be good for those who want a modern Winter Village display, but 10308 Holiday Main Street otherwise includes one.