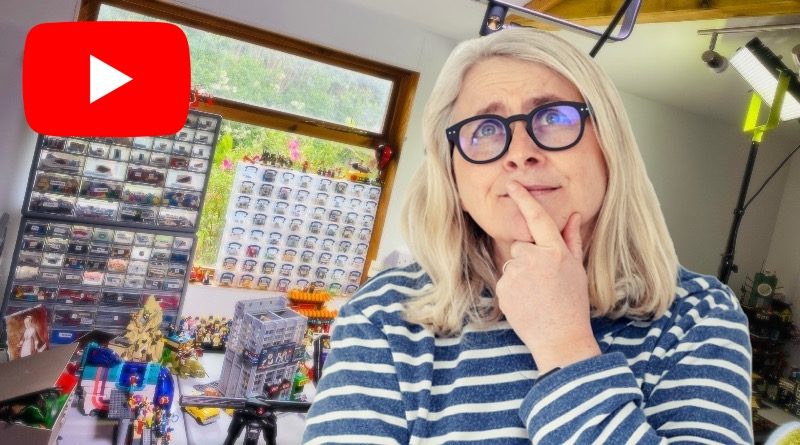 Author and screenwriter Emma Kennedy reveals how she launched her own LEGO YouTube channel, and offers some sage advice for aspiring content creators.

It’s been a long process bringing Relax With Bricks to where it is today and, if I’m honest, something of a trial-by-error, seat-of-the-pants crawl as I navigated the usual problems of sounds, lights and cameras.

When I began the channel, it was as a direct result of being asked to show more of my builds. I had started posting short, two-minute videos on Twitter as I took on the mighty Ghostbusters 75827 Firehouse Headquarters, but quickly realised I was going to have to up my game if the films were going to be of a high enough quality to watch.

The early films are very basic – there are no real lights to speak of, and all I’m using is my iPhone on a tripod, but as I progressed and more people began to watch, I invested in proper lighting and sound equipment and the difference is immense.

If you are thinking about starting your own LEGO build channel, it really is worth your while to get the technical stuff in place before you start. Where are you going to build? Do you want a neutral, white box backdrop for slick speed building? Where do you want your camera? To your left or right? On your chest or overhead or in front of you so you’re in the film, too?

Can you see what you’re building? It’s really important to have everything lit. I have two overhead dedicated lights, but a couple of strategically-placed ring lights would work just as well. You don’t need to spend a fortune on lights, and it’s certainly not worth investing in studio-style lighting until you’re ready, but it’s important to establish your build spot and illuminate it.

When it comes to sound, it took me a long while to invest in a decent lapel mic, which I think makes a huge improvement to film quality. Before that I was just using the in-built microphone on my iPhone, and if you compare early RWB films with what I do now, the difference is huge. This is the one investment I would urge you to undertake from the off. If the sound is horrible, it’s not going to be a pleasant viewing experience. Get that right and your biggest headache is solved.

For filming, I’ve stuck with my iPhone – it’s perfect for my needs and has three settings so I can pan out and in, and makes the subsequent stitching together of the daily films very straightforward. I use iMovie to put the sections together. You might also like to think about making a title sequence – I now have two very simple animations I rotate, with music provided by viewers.

Music is a minefield if you’re posting on YouTube. There are very strict copyright rules and complex algorithms that pick up any use of any song, however short a snippet you might be tempted to use. There are sites you can buy licences for music for – Adobe has a good one – and it’s well worth getting a few tunes you will be allowed to use, or, if you have the inclination and the skills, composing something yourself on GarageBand.

But perhaps the most important thing you have to think about is how you are going to do something different to all the other people putting out their LEGO content, the vast majority of whom do speed builds with reviews. What are you going to bring to the table that sets you apart? What do you want to achieve?

Do you want to simply share what you’re building, or do you want to build a community? Perhaps your LEGO channel could be custom builds only? Or ‘How To’ tutorials that are quick and easy? Decide what you want to do, post regularly, and hopefully, within time, people will find your channel and stick with it.

I knew I wanted to do slow builds, but gradually, over time, RWB evolved to become a community, with an emphasis on comedy content and fun. I have sound effect machines, minifigures of regular viewers I interact with, voices, theme tunes and catchphrases. What that does, of course, is create a sense of togetherness. We’re the AFOLWAC (Adult Fans of LEGO Who Are Chums) gang, and people feel as if they belong.

It’s what we’re all looking for really – a place where everyone knows our name. We’ve got that in spades over at RWB, so come join us. And then start your own channel, if you feel so inclined!