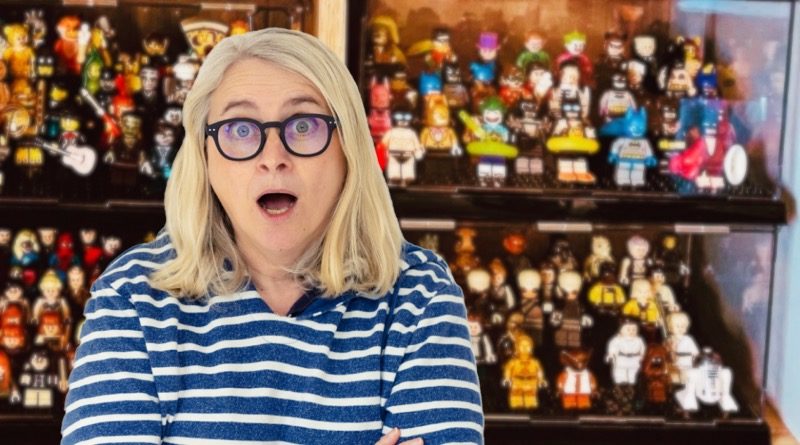 I’m a sucker for little things: puppies, baby bunnies, Mogwai from Gremlins. You get the drift. But there’s one little thing that knocks them all into a cocked hat: minifigures. I am obsessed with them. I can’t get enough of them. The hairdos, the facial expressions, the natty tops, the hats. If I’m being brutally honest, I think I might be in love with them.

There is always a small groan of disappointment whenever we build a set on Relax With Bricks and discover it’s devoid of minifigures. We’ve just finished 10283 NASA Space Shuttle Discovery, which was a fabulous build – especially that gorgeous Hubble telescope – but where were the minifigures? Would it have killed them to throw in a crew? A random billionaire space tourist? An alien? No, it wouldn’t. We felt their absence so keenly, I felt compelled to plug the gap with an immediate build of 60233 Donut Shop Opening. It came with 10 of the things. That’s more like it.

Because RWB is a collegiate experience – I do the building, with each show reading out Club Business, the comments from the AFOLWACs (Adult Fans of LEGO Who Are Chums) of the previous day’s build – we invariably end up concocting elaborate and improbable stories for any set’s minifigures.

I give them names, a bit like Richard Attenborough in Jurassic Park when the eggs hatch, so for 60233, we had Mr Peters, Duke Detain (the only character named by the LEGO Group), Terry Badboy, Wheels Ahoy, Jayne with a Y, Gregory, Mrs Shaw, Paul and Paula Pudding and last but not least, Stanley Mince. A complicated plot evolved involving subterfuge, affairs, a tangled web of disputed paternity and a surprise ending. All in a day’s work on RWB.

Before we had the modern minifigures we know and love, sets came with blank faces, odd, impersonal and solid torsos and no arms. If you were lucky, you got a hat, but that was your lot. Then, in 1978, Jens Nygaard Knudsen came up with the interchangeable minifigures we still have today. The faces may have been all the same – two solid dots for eyes, and all smiling – but the journey towards Batman dressed in a silk robe holding a plate of lobster had begun.

It wasn’t until 1989 that we got to see a hooked hand, a peg leg and different facial expressions, when the launch of LEGO Pirates set the world of the minifigure aflame. There were sunglasses, eyepatches, makeup on the ladies, open mouths began to appear and eyes gained detail.

Everyone has their favourites. I have a particular penchant for Batmen, especially those from The LEGO Batman Movie and The LEGO Movie 2. There’s a phenomenal Batman minifigure that comes with 70840 Welcome to Apocalypseburg, bearing used tires for shoulder pads and a tattered cape, which is perfection, but there are funny ones too: Vacation Batman; Fairy Batman; Mermaid Batman with inexplicable shells over his nipples. These are the minifigures I love the most – the ones where you can see the designers laughing and having fun.

Collectible Minifigures may not be everyone’s cup of tea, but just this week, I had an AFOL on RWB casually regaling us with tales of standing in a shop fondling the new blind-bagged 71030 Looney Tunes characters. He had a store detective hovering over him and glaring, but when you’re an AFOL with a mission to bring home the Speedy Gonzales with those unique cheese bricks, you’re not going to let minor embarrassment at being a 45-year-old man feeling small bags of plastic get in your way.

There’s magnet figures (I’m yet to have one), microfigures, nanofigures – they’re all addictive if you love collecting. The only range I have zero interest in are the Friends-themed mini-dolls. The LEGO Group rarely puts a step wrong, but turning minifigures aimed at girls into horribly skinny big-eyed horrors is seven shades of gruesome. Begone, foul maidens – you shall not pass.

My LEGO shed is rammed with minifigures on every surface, a lot of which are customised versions of the regulars on RWB. It’s a wonderful way of interacting with the gang, so all hail the minifigure. I adore them. Send me pics of your favourites to @legowith or @emmakennedy on Twitter.