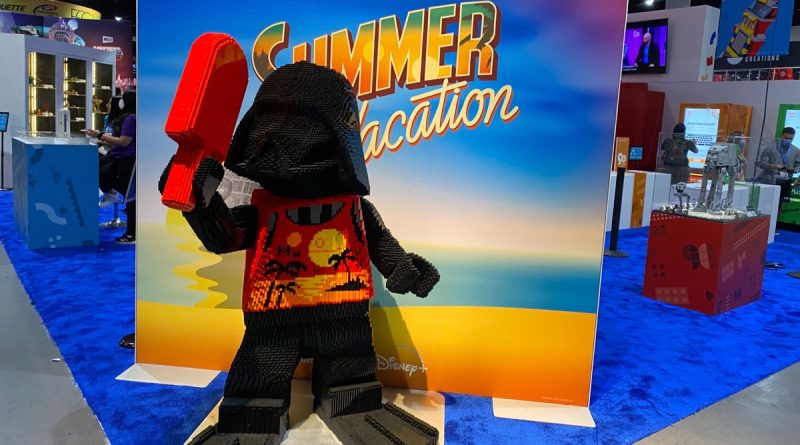 Can’t make it to San Diego Comic-Con this year? Live vicariously with a peek inside everything going on at the LEGO Group’s booth, directly from the show floor.

Just because the LEGO Group has reportedly sacked off exclusive sets and minifigures for good, doesn’t mean it’s also abandoned SDCC altogether. In fact, its presence at this year’s convention is perhaps as big as it ever was, with a booth full of interactive experiences to enjoy, sets to buy and rare gifts-with-purchase to claim.

Ace Kim – who runs LEGO fan site FBTB – is in attendance at SDCC 2022, and has now published a full guide to everything happening at the LEGO booth. If you are on the show floor, you’ll find what you’re looking for by seeking out the giant LEGO bricks hanging down from the ceiling (it’s just a small clue), or heading for booth number 2829.

Once you’ve arrived, you’ll be greeted by a couple of giant vending machines, each with what Ace describes as a ‘tap the LEGO elements’ game. The goal is to literally just tap as many LEGO pieces as possible on the machines’ enormous screens, at the end of which you’ll be gifted a copy of 11012 Creative White Bricks (as confirmed by Kirsten Acuna).

At the back of the booth sits – what else? – a LEGO Store, where you can pick up any number of LEGO sets, both licensed and non-licensed. A few had already sold out by day one, including most of the BrickHeadz, but highlights among remaining stock include 10300 Back to the Future Time Machine and 76989 Horizon Forbidden West: Tallneck – both of which are sold out online.

The LEGO Group was also giving away 2012’s May the Fourth polybag 5000063 TC-14 with purchases of at least $125 on day one, but it’s not yet clear whether the same offer will be running on day two.

The LEGO love at SDCC doesn’t end there, though: head over to the Nintendo booth and you’ll find the enormous 663,900-piece animatronic statue of Bowser, which is also available for photo opportunities. You’ll be able to build your own slightly smaller giant King of the Koopas when 71411 The Mighty Bowser launches in October.