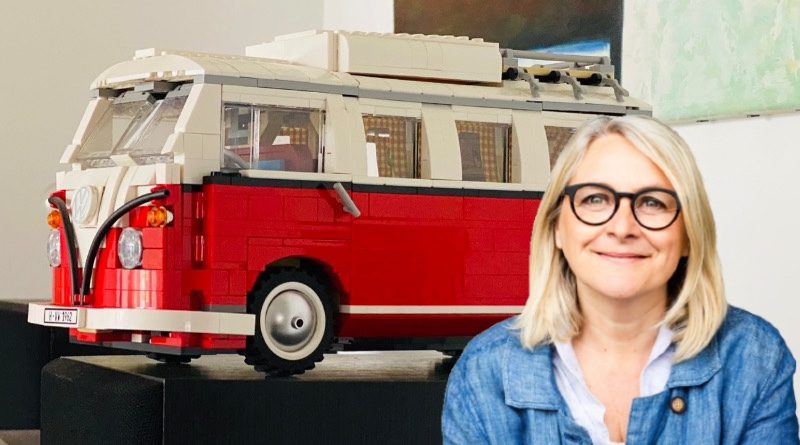 Author, screenwriter, and adult fan of LEGO (or AFOL) Emma Kennedy ruminates on the impossible choice of deciding which LEGO sets to put on display, and which to dismantle.

It’s difficult, isn’t it? LEGO sets are not, it turns out, like your children: you are allowed to have favourites, and sometimes you have to lose one, but when the Shelf Police come knocking, you’re forced to make an impossible choice. Which set can you try to hide somewhere in the house, and when do you have to concede you’ve lost and it’s going to have to be broken up?

I’m going to be bold here. When the Designated Shelves are crammed to bursting, the very first thing you should try to get away with is sneaking a set on to an unexpected location. These can include: window ledges in the downstairs toilet, on top of the fridge, ooh, look, a bookcase, hello filing cabinet let’s cheer you up, dashboard of car (really?), or for the more audacious of you, wear it like a hat.

This may work until a) it’s noticed or b) you’re told off. Occasionally a) and b) may be simultaneous, in which case the game is up, but a top tip is to try to persuade the non-AFOL in your life that LEGO builds can only be lifted by trained LEGO builders – of which, conveniently, you’re the only one currently available, so any crazy ideas they may have about picking it up and moving it are for the birds.

Put the fear of god in them – it’ll bide you time. Sometimes, simply walking round the house carrying a LEGO set as if it might be an artefact from Raiders of the Lost Ark or nitro glycerine may confuse flatmates, house pals and partners into caving. “Yes,” you can whisper, “it’s THAT precious.” What I’m saying is – people are weak and that VW Camper Van looks super on top of the record player.

But things are not always going to go our way. Okay, you’ve managed to get your modular miniatures on top of a pile of boxes in the spare room, Ghostbusters Firehouse is atop the wardrobe, Welcome to Apocalypseburg sits on a speaker, but don’t get cocky, kid. You’re out of space.

We all have our favourite fun sets, we all have our impressive-to-look-at sets, then there are the custom builds that suck in non-AFOLs and convince them you might be quite cool after all. These sets must never be broken up. No, not ever, under any circumstances.

At the other end of the scale, you’ll have the totally-not-bothered sets – 3-in-1s you got because you wanted the blue bricks, that Harry Potter set that came with cogs or any number of grey, grey Star Wars sets. Feel free to break those up any which way. File them into your storage systems – they will live another day.

The tricky zone is the sets you like but don’t quite love, but wait, maybe you DO love them. They’re the end-of-the-relationship sets – you know it’s over, but you don’t want to quite admit it. These are the sets that may have to be retired into the sum of their parts.

I’m lucky in that I’ve got a LEGO shed, but I have to share that shed with a non-AFOL. I’m allowed half of it, and woe betide me if I push my luck. A few weeks ago, knowing I was about to have 71741 NINJAGO City Gardens and 21325 Medieval Blacksmith join the ranks, I needed to make some space, so I had a long hard look at my collection.

A few months ago, I built 71374 Nintendo Entertainment System. I loved the TV with the fabulous moving Mario game, but the grey console that went with it? Meh. I can live without it. Besides, that console was rammed with super-delicious LEGO pieces you can’t even see. Break it up, build them into something else.

There’s also the (whisper it softly) sets you were looking forward to but turned out to be a bit disappointing – I’m looking at you, 75290 Mos Eisley Cantina. Keep the bar, disperse the rest.

LEGO has to earn its spot, but broken down or not, the beauty of any collection remains – if you miss it, you can always build it again. But when it comes to space, sometimes you have to be a little bit ruthless. (Just don’t forget that downstairs toilet.)