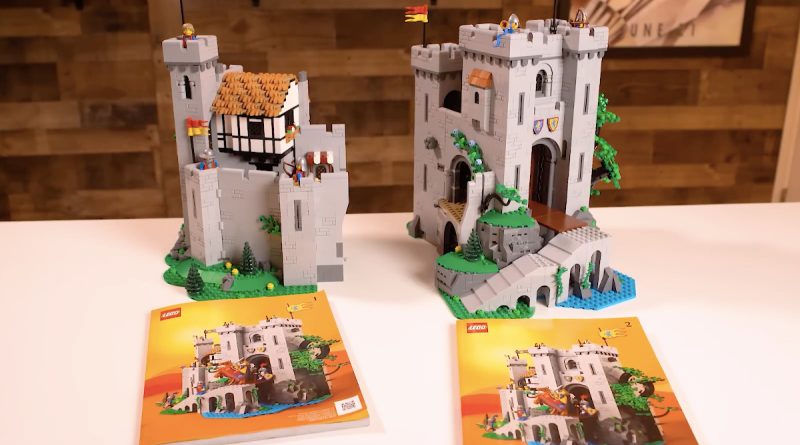 The LEGO Group’s most ambitious 90th anniversary release – 10305 Lion Knights’ Castle – is out now for VIPs. Here’s what the broader LEGO community makes of it…

The LEGO Group is 90 years old this year, and it’s honouring the event with some impressive LEGO products. The cream of the crop so far is 10305 Lion Knights’ Castle, a massive tribute to the Castle theme.

The set includes references to some of the earliest LEGO Castle models, whilst containing them within a far more ambitious set design. Its piece count (and RRP) are also considerably higher than any LEGO Castle sets preceding it.

Such a model was almost certainly going to be well received by LEGO fans. We certainly liked it; in our review of the model we highlighted its evocation of nostalgia, its subtle design techniques and its visual splendour. Several other LEGO fan sites have reviewed the set, and we’ve gathered some of their opinions together in one place.

A rich sense of history – for better or worse

10305 Lion Knights’ Castle takes a deep dive into the past of the LEGO Castle theme. The box, for example, details the history of the included minifigures, as well as their relationship to each other. It seems that the Lion Knights and the Black Falcons are at peace with one another for the time being.

Naturally, those references extend into the set itself. The banquet hall contains several retro-styled shields, whereas the child’s playroom includes a tiny yellow castle – a reference to the theme’s earliest days.

Not all the retro nods are appreciated, though. The castle features an extremely steep ramp leading up to the drawbridge – apparently a reference to old LEGO baseplates with similar features. A nice throwback, then, but not terribly practical – at least if Beyond the Brick is to be believed.

“I really don’t like the way this ramp looks at the front,” says Adam in the Beyond the Brick review. “It’s built using large slopes that you can’t attach minifigs to, and the incline itself is really steep.”

There’s fine attention to detail in the build

As these reviews highlight, 10305 Lion Knights’ Castle has plenty of small, thoughtful features to uncover during the building process. This extends to things like the historically-accurate foods in the kitchen, the piles of flour near the millstone, and a suspicious brown frog near the toilet.

The castle itself also uses some savvy construction techniques, reflecting the design of older LEGO castles. Many of its predecessors could fold outwards, allowing you to create either a castle wall or an enclosed structure. As Brick Architect made clear this set mimics that idea, using a set of hinges to create a section that lies flat or folds square when moved. Moving the wall even reveals a golden frog sculpture concealed in an alcove.

“Of all the design decisions made this must be one of my favourites,” the site’s review says. “They used a series of hinge pieces that slide in and out of a hidden compartment to either make this a straight wall when opened or a square when closed. This is one of the many considerations the designers had to make to ensure that this set is displayable from a variety of angles without looking odd.”

As such, this is clearly a set that’s true to its roots – even if the resulting build is far more sophisticated. That idea of sophistication even extends to finer details in the model.

“A touching detail that is included here is the use of ornate pillars,” says Koen van Der Hoeven elsewhere in his Brick Architect review. “By continuing the tradition to place rounded tiles and curves on their side we build up rounded pillars that extend out from the castle walls to give added depth and character. The capital of the pillar being ornate and patterned crowns this entire micro build even more.”

Many of the set’s hidden features relate to the castle dungeon; the drawbridge can deposit intruders here, and one of the jail cells also contains a false wall. Sadly, this is something the skeleton in the set couldn’t make use of.

The castle’s secrets even allow for some subtler narrative moments. Its interior market stall can be raised up to reveal a Forestmen’s hideout, which suggests all is not as peaceful as the box lore suggests.

“There’s tonnes of weapons stored under there; you can tell that they definitely don’t want to be found out,” remarks Beyond the Brick’s Adam.

Plenty of new pieces are used

While 10305 Lion Knights’ Castle is more than the sum of its parts, those parts are particularly interesting. New Elementary has taken a very deep dive into the castle’s components, revealing some new toys for custom builders.

Notable new parts include a smaller arch piece and an inverted curve, both of which appear for the first time here. There’s also a number of recoloured pieces, including the classic LEGO tree in dark green.

“A whopping 24 newly recoloured elements appear in the set. Of particular note is Plant, Pine Tree – Small 2 x 2 x 4 which comes in a colour other than Dark Green for the first time in 36 years,” says New Elementary’s Ben Davies. As such, this is a solid option if you want parts a little off the beaten track.

On the minifigure front, there are several printed shield elements to expand your collection (or start a new one). There’s also a trio of new fabric elements – two flags of differing designs, and a delightful cloak for the queen to wear.

“It’s worth noting that the cut of the large waving flag is itself an homage to the large waving flag textile which appeared throughout both the LEGO Castle and LEGO Pirates themes between 1993 and 2001,” explains New Elementary. While the castle’s broader aesthetic pre-dates that period a little, this factoid could pique the interest of ‘90s kids too.

A high price sours the experience

Unsurprisingly, all these features come with a substantial price tag – which both Brick Architect and Beyond the Brick felt worked against the model. They each argued that 10305 Lion Knights’ Castle should be priced more cheaply to ensure the best value for customers.

“Despite the many positives features of this set, I must reassess my initial inclination to give this set a Must Have rating by seriously considering the overall value based on the $400 price point,” concludes Brick Architect.

“Had this set just been $50 cheaper that would have been enough to tip me over the line, however for the actual price point, I will give this set a 4/5 Recommended rating. (It’s increasingly difficult to justify purchasing as many large and expensive sets at the same time that many consumers are experiencing increased cost-of-living, not to mention news of record profits at the LEGO Group.)”

“I do have to criticise that price,” concurs Beyond the Brick. “Even with all the value we’ve talked about so far and how great this set is, it still feels like it should have been priced closer to $350.”

From that perspective, this set might find a smaller audience than anticipated – despite its many strong points.

The reviews for 10305 Lion Knights’ Castle demonstrate this is an ambitious and thoughtful set. It offers plenty of bold construction techniques and retro throwbacks for LEGO fans to appreciate.

10305 Lion Knights’ Castle could prove something of a tipping point for LEGO fans. It’s not the most expensive set the LEGO Group has released – not by a long shot. But there is, perhaps, a clearer discrepancy here between what you pay and what you get.

Don’t forget to check out our own review of 10305 Lion Knights’ Castle. The 4,514-piece set is available now at LEGO.com for VIPs. It’ll be available for purchase for non-VIPs on August 8.

Featured image: Beyond the Brick