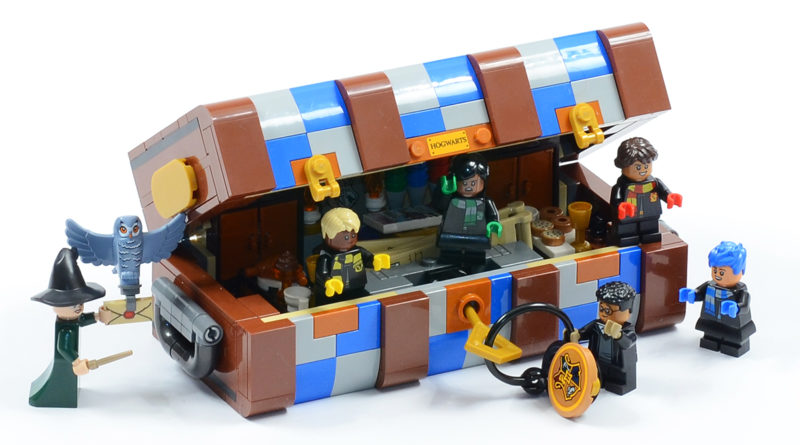 LEGO Harry Potter 76399 Hogwarts Magical Trunk brings something completely new to the table for the Wizarding World, and it’s full of surprises – but not necessarily good ones.

Since as far back as 75979 Hedwig in 2020, the LEGO Harry Potter design team has showed its interest in breaking playset boundaries with new and innovative types of products. There have been the flapping-wing creatures, maxi-figures, book-bound Moments sets, massive 76391 Hogwarts Icons Collectors’ Edition set, and now this almost DOTS-like customisable trunk.

76399 Hogwarts Magical Trunk set sits squarely in the camp of those that are much less fun for adults than kids, who would likely enjoy the novelty of recreating vague impressions of scenes within a trunk and randomly adorning tiles with the plethora of included stickers. For Harry Potter collectors and older fans, the new minifigure parts are undoubtedly the draw, while the trunk itself surprised us in not the most positive of ways.

76399 Hogwarts Magical Trunk presents one of those fun LEGO builds during which you don’t quite know where things are headed each step of the way, until they ultimately come together. Lots of good LEGO geometry and SNOT (Studs Not On Top) work has gone into designing an impressively smooth trunk, with a simple yet effective locking mechanism and fantastic finished look.

Fantastic finished look from some angles, that is. For whatever reason, the LEGO Group made the decision to present about three quarters of a finished trunk. The back half abruptly cuts off when the trunk is closed, which looks awkward even when viewing the set from the front, and when you do look around the back you’re greeted by the unsightly view of portions of the interior furniture.

76399 Hogwarts Magical Trunk would have benefited greatly from an extra removable back plate that would finish off the trunk when it’s closed up. This would also have solved a play issue: as it is, you’re forced to dismantle whatever interior scene you have going on and line up those larger pieces of furniture in what is effectively the middle of the trunk to create the back wall, or else anything inside would fall right out when the trunk is closed.

The other major surprise of the trunk is just how small it is. As an enclosed trunk it really doesn’t take up much space, and even though it contains so many extra pieces for customizing its colour scheme, the finished model doesn’t feel like great value when looking at it in front of you.

Ample parts are included for adorning the trunk with the colour scheme of your preferred Hogwarts house, and while the instructions suggest particular patterns in particular colour schemes, each pattern can be replicated for any house. Of course, much like with DOTS sets, these are just suggestions and many more patterns are possible.

On to the interior of the trunk and many of its more positive aspects, a lot of simple yet clever design work has gone into creating reversible builds that work for the different scene setups suggested. The two cabinets have candle pattern stickers on their reverse sides, while the house points segment has a bookshelf on its reverse.

It’s also refreshing to see a set outside of the Creator 3-in-1 line explicitly direct rebuilding, with instructions included for turning the couch into chairs and the tables into a common room bed with colours to match any of the four houses. The tall banner parts also get stickers on both sides, to be flipped based on the scene.

The instructions contain directions for three particular scenes, all meant to be tied to starting one’s Hogwarts journey in Year 1: the Sorting Ceremony, the Great Hall Welcoming Feast, and the Common Room. In fact the whole set follows this theme, with the front of the instruction manual bearing artwork of a Hogwarts acceptance letter, and the LEGO owl included with the LEGO version of that same letter.

Strangely, despite the work put into making the taller furniture pieces reversible and the other furniture re-buildable, none of the scenes use all of them. The Sorting Ceremony makes use of all the cabinets though not the parts for the couch, tables, or any of the accessories, while the Welcoming Feast oddly leaves off the taller pieces despite there being space for them.

It’s also a bit odd to change around the interior between the Sorting Ceremony and Welcoming Feast given that these two events take place in the same room. The Common Room makes the best overall use of parts and feels the most like a complete scene, though it too does without one of the cabinets.

Yet another annoyance is that the couch and tables are required to be in couch and table form to fully pack up the trunk, but they are not used in a suggested scene at once in these forms – the couch is rebuilt into chairs when the tables are used in the Welcoming Feast scene, while the tables are rebuilt into a bed and small desk when the couch is used in the Common Room scene. Obviously we could deviate from the instructions, but it is strange that no one scenario makes use of all of the included builds and accessories.

It’s also a shame that the scenes have to effectively be dismantled any time you want to close the trunk because, as mentioned, the taller parts form the enclosed trunk’s back wall, and there’s no space for them to fold up in any other position. The Moments sets also have this problem to some degree, but in their case all of the extra builds don’t click on to studs anyway, so there’s really no suggestion that the books could be folded up with a complete scene already constructed inside.

Here it’s very different, and the desire would be for the trunk to open and already have a set up Common Room or Great Hall scene, but alas, that’s not how it was designed.

A significant draw of 76399 Hogwarts Magical Trunk will be the myriad minifigure elements included. Five torsos, 11 heads and 17 hairpieces can be remixed into custom Hogwarts students, of which seven heads and four torsos are brand new. Only one hairpiece is technically exclusive – the Incredibles’ Violette’s hairpiece without printing, but some are rare while others are more common.

Excitingly, a new ‘medium brown’ colour for skin tones has been released in 2022, and currently only appears in the realm of minifigure parts with two heads in this set (it also comes in a couple of Friends sets), though we hope the LEGO Group will start to use it more frequently and produce hands in that colour soon.

Of course, being designed for making students means that all of these new faces have appropriately childlike expressions and features, which might not appeal to all minifigure customisers. Some appear a bit too exaggerated, and we would have liked to have seen a few more with glasses, which are currently limited to one each of the medium nougat and nougat heads, besides for Harry himself.

For Harry Potter fans specifically, it has been noted that the House colours on the torsos have been swapped for their brighter versions in this set, so don’t match previous torsos released in this line. Gryffindor, Slytherin and Ravenclaw all use the standard shades, rather than dark red, dark green and dark blue respectively. That will pose a problem for people who prefer utmost consistency, though a bit of variety doesn’t bother us terribly.

One other odd choice is that the set nominally includes parts to make Hermione Granger and Draco Malfoy, but not with their correct heads. The very generic light nougat girl face is supplied, which has already been used for three characters in this line alone: Susan Bones, Luna Lovegood and Ginny Weasley (the latter two of which came in the same set!). Meanwhile Dudley Dursley’s face replaces Draco’s; as the designers had decided to include a face belonging to one other particular character anyway, they might as well have included Draco’s specific head instead.

All in all, the line-up of characters and minifigure parts might not be the most essential to Harry Potter fans, but anyone wanting options for building lots of kid minifigures or to generally add to their stock of head and hairpieces will find a lot to enjoy here.

Once again we find a set where the raw numbers suggest great value – £54.99 / $59.99 / €59.99 for 603 parts, including loads of minifigure elements. That said, the actual model comes across as quite small, and given the flaws to its exterior and the fact that the scenes don’t even use all the builds at once, it doesn’t feel as great value as you might expect for the price.

Perhaps it’s hard for us to truly get into the mindset of this set, as it can’t be compared one-to-one to traditional playsets, and randomly stickering LEGO tiles feels blasphemous to us adults, but even the play experience doesn’t seem quite all there for this price.

76399 Hogwarts Magical Trunk stands apart from any Harry Potter product the LEGO Group has released before, and probably from any it might ever do again. It tries to offer customisability and an outlet for personal expression, from the plethora of stickers and parts for different Hogwarts house colour schemes, to the minifigure parts with every available skin tone and hair pieces ranging from reserved to wacky.

While it might succeed at providing this play experience for children, it lets itself down in some notable respects. The trunk model itself comes across as small and unfinished. Not all of the interior builds are used at once and any scene has to be taken down for the trunk to close. The minifigures’ house colours don’t match previous ones, so won’t appeal to all LEGO Harry Potter fans, while many of the facial expressions might be too comically exaggerated for some tastes and very few have eyewear.

Some of these shortcomings might sound too much like nitpicks, but they unfortunately keep this set from realising its full magical potential, and instead keep it in the realm of novel, but just okay.

How long does it take to build LEGO Harry Potter 76399 Hogwarts Magical Trunk?

It takes around one hour to build 76399 Hogwarts Magical Trunk, which makes for a pleasant experience of discovering the techniques involved, mired a little later on by a fair amount of stickering (not even taking the optional stickers into account).

How many pieces are in LEGO Harry Potter 76399 Hogwarts Magical Trunk?

There are 603 pieces in 76399 Hogwarts Magical Trunk, including lots of minifigure parts for customising, good accessories, and lots of 2×2 slopes and 2×2 corner tiles that get left over for your parts bin.

When it’s closed up, 76399 Hogwarts Magical Trunk measures an underwhelming 6cm high, 17cm wide and 7cm deep, while unfolding it effectively doubles the depth to 14cm.

How much does LEGO Harry Potter 76399 Hogwarts Magical Trunk cost?