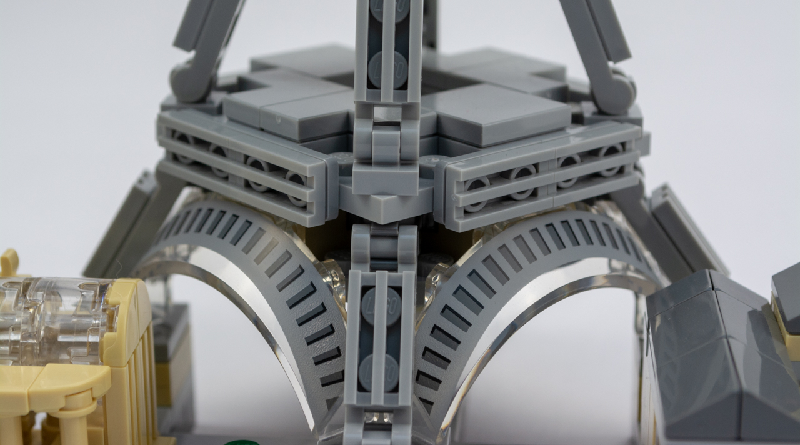 As the LEGO Architecture theme continues to expand, Brick Fanatics takes a closer look at the City of Light in new skyline set 21044 Paris

Widely regarded as the most romantic city in the world, Paris is full of iconic buildings and landmarks but none more so than the Eiffel Tower herself, which despite having had a singular LEGO Architecture release as 21019 Eiffel Tower a few years ago, is naturally included here once more in 21044 Paris albeit with a slight redesign. 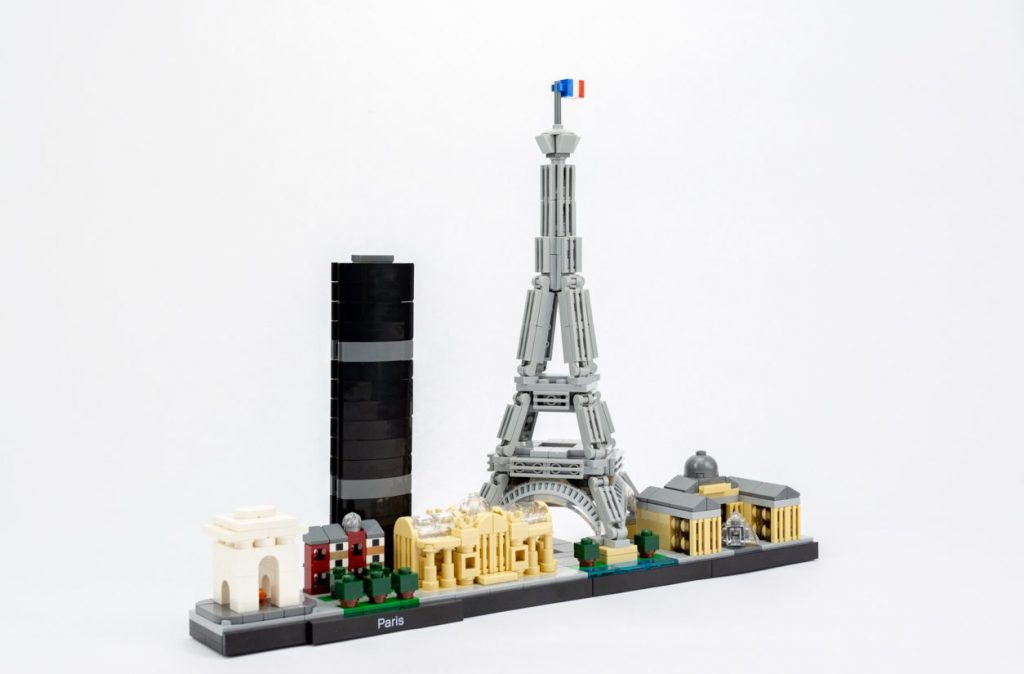 As with all the more recent LEGO Architecture sets, the packaging is the thicker card style with a flap that can be securely closed even once the security tab has been opened. These sets are designed to feel more luxurious and touches like quotes on the inside of the box show the extra effort LEGO has gone to for the consumer.

The instructions are also worth mentioning here if you have not built an Architecture (or Ideas) set before. A thick booklet in English and French features photos and details about Paris and the landmarks presented within the model are highlighted over the first few pages before getting stuck into the build itself.

Starting with the base, it measures 36 studs in width and is built mostly from grey plates and tiles with the odd bit of tan, green and trans-blue. There are thankfully no stickers in this set, but we do get a printed 1×8 black tile with ‘Paris’ on it adding a simple but appreciated detail at the front of the model.

The Grand Palais is the first building to be constructed and possibly my favourite after the Eiffel Tower. Its appearance may be deceptively simple but the use of trans-clear round bricks and an astromech head to represent the glass among otherwise tan bricks looks great. Working at such a scale means designers are always going to take huge liberties, but I feel this really comes as close as is possible without employing stickers. The ¼ circle tiles are also put to great use here to capture the curves of the architecture.

The Champs-Elysées is pretty much entirely made up of 1×1 plates and a few headlight bricks to represent both the buildings and trees, but the black windows printed on the 1×1 white plates certainly improves the overall look.

I’m not as familiar with the Tour Montparnasse which looks the most out of place in comparison with the others, but as the second highest model here, it does add some visual flair for display. If you’re after plenty of black curved slopes, then you’ll get 28 here, representing the 7,200 windows the skyscraper features in real life. 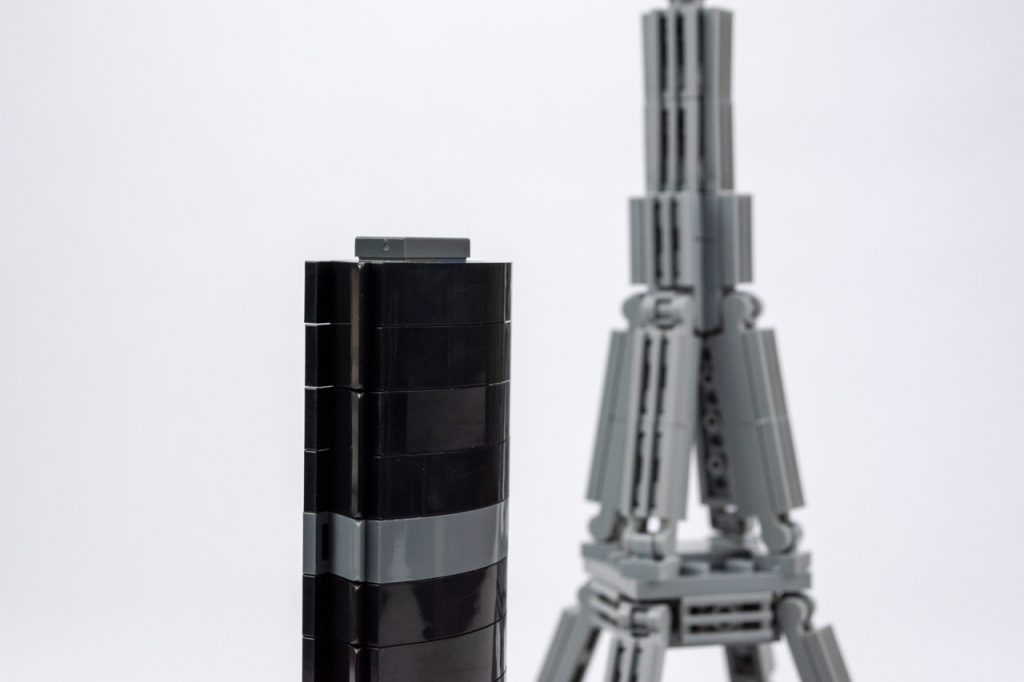 The Musée du Louvre is very recognisable here thanks to the familiar U-shaped footprint and of course the glass pyramid; represented with a brilliant use of the recent pyramid-ridged tile in trans-clear. Whilst the Arc de Triomphe is also hard to mistake, it’s far less impressive in micro-scale compared to the stand-alone version it received in 2017. It’s a much smaller scale and again I don’t think it could be much improved sans stickers, but compared to the others it looks the most lacking in appearance.

With the rest of the skyline complete, the pièce de resistance is the last part to build. The previous LEGO Eiffel Tower Architecture set already looks great at a smaller scale so I was curious how it would translate at a slightly smaller scale again. 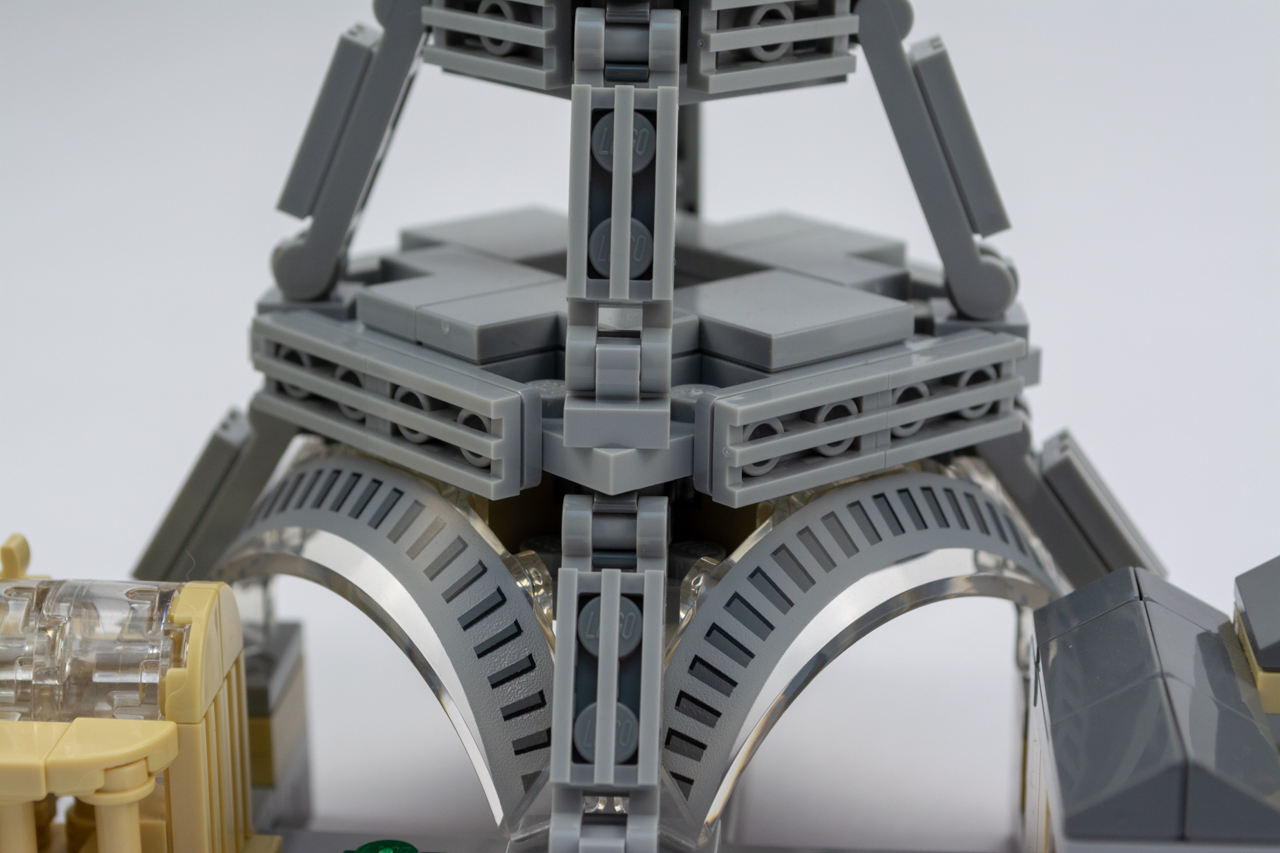 Each level is put together using a combination of plates and 1×1 plates w/clips allowing for clever and stable construction when joined with the modified plates w/bars. The arches at the base are made using four curved windscreen elements featuring a printed design. Some may think this is a bit of a cop out, but I actually think it’s a clever use of the part and allows for a more realistic approximation to be made than an entirely brick-built solution.

The four sides that make up the upper height of the structure are adorned with 1×2 grill plates and clip onto a central piece topped off with a small brick-built Tricolore flag. It’s only made of two 1×1 plates and a clip, but works perfectly showing sometimes you don’t have to over-complicate things to make them work.

The designers have done a fantastic job at such a small scale and whilst I would perhaps have enjoyed seeing a few more buildings such as Notre Dame or the Moulin Rouge, there is no mistaking what city you are building here. Equally, there is no reason a capable builder couldn’t create their own additions.

If you’re tempted to dip your toes into the Architecture theme but haven’t managed to yet, then this could be a great entry point for you. That said, if micro-builds aren’t your thing, this is unlikely to change your mind. All in all, 21044 Paris is a great display piece and makes a great purchase for any AFOL Francophile.

21044 Paris is available now at shop.lego.com. You can help support Brick Fanatics’ work by using our affiliate links.