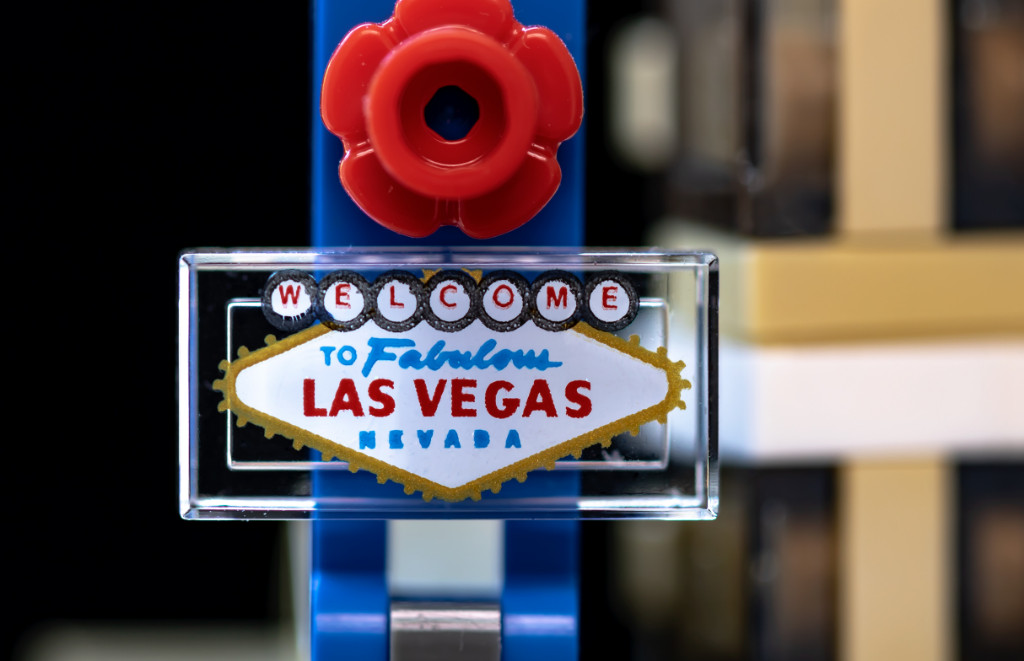 As a keen micro builder I have often been tempted by the Architecture series, but had yet to purchase one, until now. Las Vegas has a certain glamour, a certain pull, a certain mystique that is hard to resist both in real life and, as it seems, in LEGO form. There is an old saying, “whatever happens in Vegas, stays in Vegas”. Well for the purposes of reviewing 21047 Las Vegas I am going to have to break that rule otherwise this would not be very helpful. 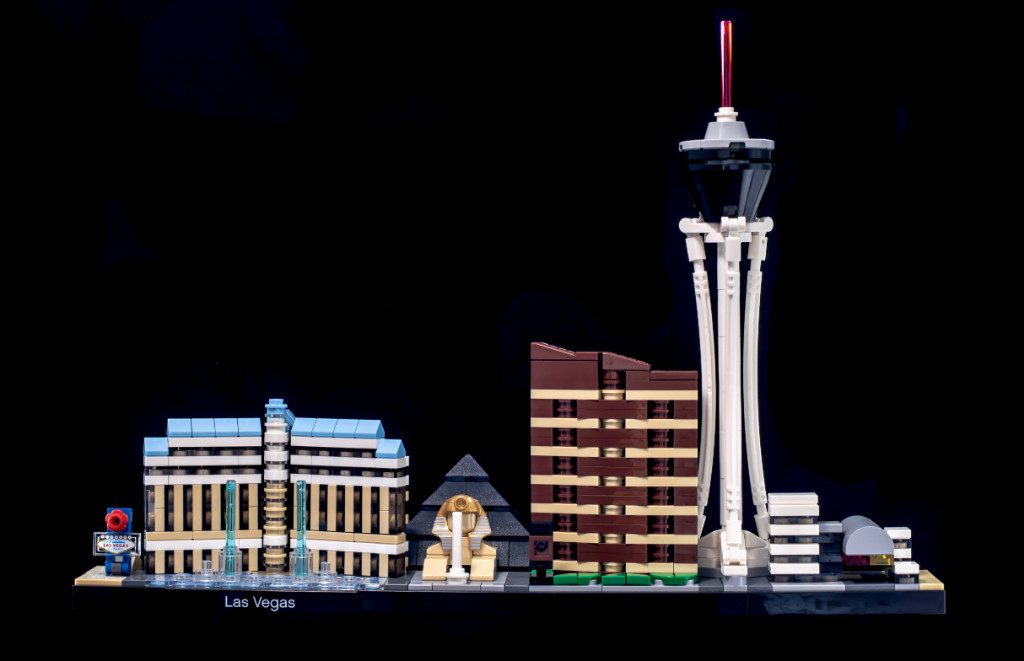 The first thing that separates this from most other LEGO sets is the beautiful box it comes in. I love it when LEGO sets are presented in this way. It just feels like you have something special in your hand as opposed to a toy, which is not intended as a negative on other LEGO products, it is just that this feels like a more grown up series.

The instruction manual is equally well presented, printed onto sleek black pages, it is filled with stunning images of the Vegas skyline and the buildings you will be recreating, as well as a brief history of the city, some really interesting facts and quotes from various legendary stars who’ve all graced the famous Strip. More facts are scattered throughout the manual, drip fed to you as you progress through the build. As an introduction to 21047 Las Vegas it does a wondrous job of creating anticipation.

As a newbie to the architecture series I was surprised to see that although the 501 parts that are included in the set were spread out among five bags not one bag was numbered. There are some really great parts within this set, such as the Pharaoh head piece used for the Sphinx outside the Luxor Hotel, the 1×1 double slopes in medium blue for the roof of the Bellagio (new for 2018) and the iconic ‘Welcome to Las Vegas’ sign printed onto a 1×2 clear-trans tile, which is now my all time favourite LEGO part – I love it.

The process of separating the parts out took around half an hour and I’m still struggling to see exactly what the point was of not including the numbered bags is. It’s a minor gripe but bear in mind you won’t be able to just open the box and get building.

When you start the first stage of construction, it is building the base that the skyline will sit on. It’s a satisfying process with a few interesting parts and placements that at first seem strange but later reveal themselves in quite a clever way. I’m deliberately being vague here because I don’t want to spoil the process too much. I’ll just say it’s a great moment when it all becomes clear.

In fact that sense of building the Vegas skyline from the ground up continues throughout the whole process. It’s an almost SimCity type feeling, watching the world famous Strip come to life before your eyes.

The buildings themselves are all incredible micro recreations of their real life counterparts, starting with the Fremont Street Experience. The curved roof piece with trans-clear plates underneath is perfect for recreating the giant screen. It’s by far the smallest structure in the skyline but an important one to include as its where Vegas all began and serves as a great introduction to the micro-scale techniques that are present throughout this model.

Next is the Luxor. It’s only half of the pyramid but looks so effective in black. I am surprised however they didn’t include the famous Luxor light beam coming out of the top, especially as it’s such a prominent feature of both the description of the hotel resort and accompanying image in the manual.

The Sphinx that sits outside is a simple design but one that looks perfect. The real Sphinx in Vegas has a large painted face but I think in this instance the plain tan minifigure head is in keeping with the more stylish representations of the buildings rather than direct recreations. Overall it is a good choice.

The Stratosphere is admittedly a very quick and easy build but, like most of this set, still a clever design. The sizing of the tower compared to the other buildings helps give the skyline a real sense of scale.

I’ve had the pleasure of visiting Las Vegas and had some great times inside The Encore at Wynn, so for me it felt a real privilege to be able to build it in an official LEGO set, causing all those good memories to come flooding back. The build itself is fairly repetitive but I found it a zen like experience. The designers have also utilised a clever building technique in order to create the slight curve that is present in the hotel. Bear in mind, that due to the small parts used in its assembly, you’ll need a flat surface to press the pieces together to ensure they align properly.

Despite the fact the designers of 21047 Las Vegas have done a fantastic job in recreating The Encore I do wonder if the 1×3 brick could have been printed with the ‘Encore’ sign? It would have been within scale and would have added a lovely bit of detail to the building.

The final part of this model to construct is the Bellagio, which along with Caesar’s Palace, is probably the most iconic building on the Strip and the one I was most looking forward to putting together. I was not disappointed – in fact I think it might include the single best ‘eureka’ moment I have had in my entire time building with LEGO bricks. I don’t really want to spoil it because when you realise how the parts you are building go into making the walls of the Bellagio it is a truly brilliant feeling. Hats off to the designers on this one, because it is genius. It is a technique I had never even dreamt of doing but one I shall certainly be taking forward in future MOCs.

The world famous fountain has lovely detail and the transparent pieces help give it a water like shine. The clever use of parts helps to create different heights throughout the fountain, creating a sense of movement. It honestly looks like the water is gradually bursting into a crescendo.

Finally as I neared completion, I felt a pang of sadness because I enjoyed this process so much, surely a testament to a great LEGO set. The last piece to place could only be the iconic ‘Welcome To Vegas’ sign. It is a really nice touch, showing how the LEGO Group takes the build itself into account when designing the instructions.

Overall this was an utterly fantastic set, packed full of wonderful building techniques to create great micro renditions of the sights. Despite the size there are some really nice pockets of detail scattered throughout. I particularly like the tan pieces used either end of the skyline to help create a sense of the city being surrounded by desert. I must also applaud the designers for giving the skyline a great sense of scale. Particularly if viewed with your eye line at the height of the ‘Welcome to Vegas’ sign.

Being that this was my first LEGO Architecture set, I admittedly took a bit of a gamble in purchasing it – but I certainly hit the jackpot. If you have been to Vegas and have good memories of your time there you will absolutely love this set. If you’re a fan of micro building then it should also be on your list – and if you’re a fan of LEGO in general, looking for something more mature, then this also comes recommended.

21047 Las Vegas is available now at shop.lego.com. You can help support Brick Fanatics’ work by using our affiliate links. 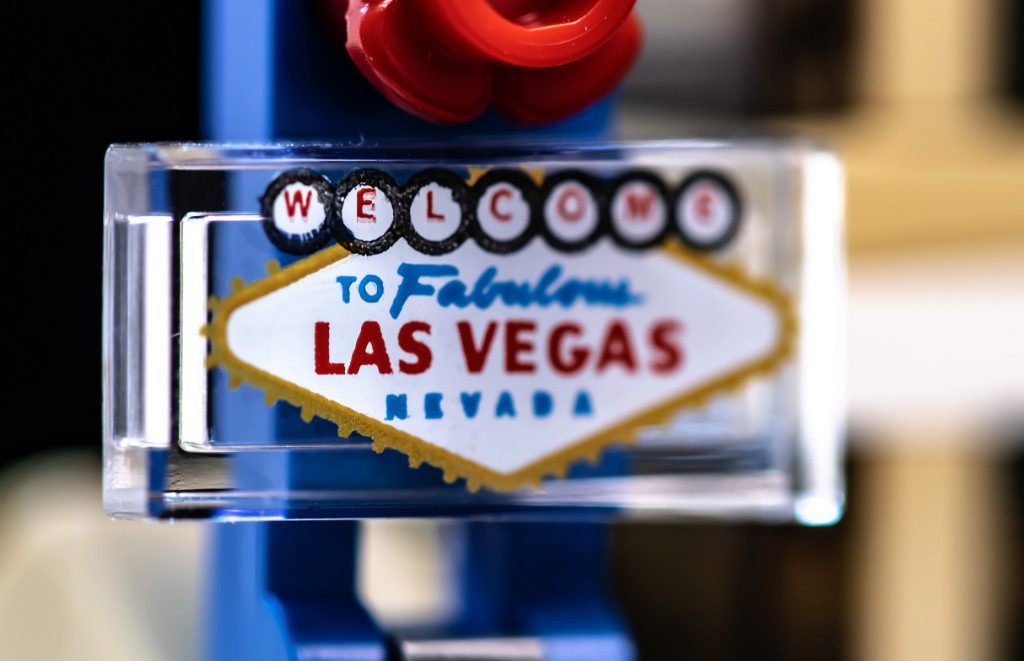