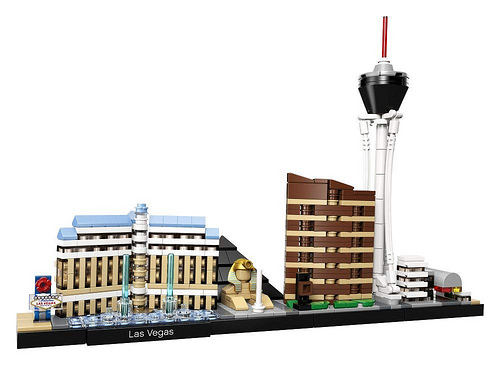 Fans can now get a better look at the upcoming LEGO Architecture set, 21047 Las Vegas.

LEGO Architecture 21047 Las Vegas was redeveloped after the tragic shooting at the Mandalay Bay Hotel, which was going to be part of the original set numbered 21038. The LEGO Group replaced that location with the Bellagio for the product that will be released later this year.

Now, the Brick Fan has shared official images of that set from Amazon, showing the box art and the completed model. A release date has not yet been announced, but the set is expected before the end of the year.

Alongside the Bellagio, the cityscape includes the Welcome to Fabulous Las Vegas sign, the Luxor Las Vegas, the Encore at the Wynn, the Stratosphere Las Vegas and the Fremont Street Experience.

LEGO Architecture 21042 The Statue of Liberty, 21041 The Great Wall of China are available now from shop.LEGO.com.