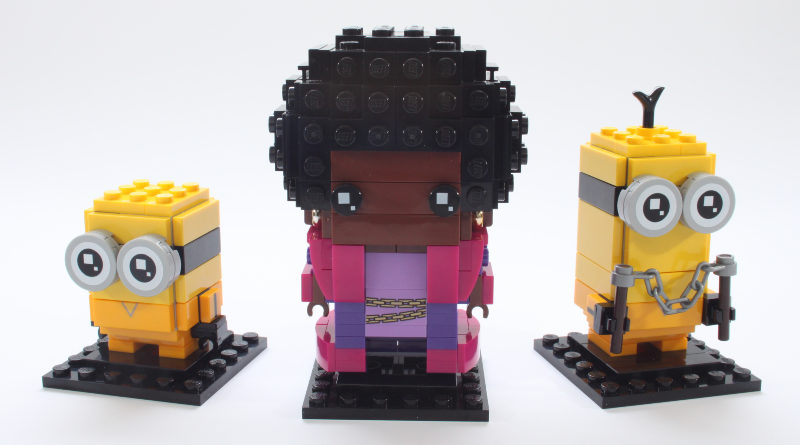 The Minions have a new, stylish baddie in town, and she’s making her first appearance in LEGO form in BrickHeadz 40421 Belle Bottom, Kevin and Bob.

Minions: The Rise of Gru sees a fresh villain take centre stage alongside a pair of the yellow fellows as BrickHeadz, but will the new set remix the formula, or are the designers reaching for the Belle Bottom of the barrel?

The journey into villainy begins by building Belle Bottom, the mysterious antagonist for the new film. Little is known about the character, but judging by the trailers released so far, she’s full of sass, wit and an abundance of style. Whilst the former two traits are particularly difficult to get across in BrickHeadz, the LEGO designers have done an excellent job in recreating her fashion sense, from the pink and purple ruffled coat to the golden chains wrapped around her waist. Even the afro is suitably large, and adds a fair amount of weight to the build compared to other BrickHeadz sets.

Golden earrings are attached at her side too, adding a shine to the model when positioned in the light. This only adds to the uniqueness of both the build and the finished model, which is sure to stand out amongst the LEGO crowd. Bob and Kevin are the accompanying Minions and make sense to be included in the trio as the namesake of the movie. Unlike most other three-stud-wide BrickHeadz before them, the pair continue their head builds all the way through their body, making for a repetitive but oddly satisfying process.

Kevin features a particularly interesting building technique in which a blade of black grass is inserted into an inverted, hollow stud. This makes Kevin one of the only BrickHeadz to have the mysterious pink brick placed upside down. Compared to the duo included in 40420 Gru, Stuart and Otto, Kevin and Bob don’t wear the denim overalls that are usually the uniform of all Minions, but instead don orange jumpsuits, while the former is equipped with a pair of nunchucks.

Like all BrickHeadz, this set features no minifigures with all of the focus, personality and charm honed into the LEGO caricatures themselves. Each one brings with it a certain charm, and are sure to stick out on display with their bright colours.

With three included BrickHeadz – one large and two small – the price will likely match that of other triple packs, such as 40466 Chinese New Year Pandas. As such, it feels like it lands on the more generous side of these sets, with a piece count on the higher end of the theme.

It’s hard not to see good value for money in the model, not just for the adorable stature of the characters or the high price-per-part ratio, but the weight that Belle Bottom carries compared to other BrickHeadz.

If you’re angling for a pair of Minions (and don’t mind not having them in their iconic blue overalls), 40421 Belle Bottom, Kevin and Bob is likely your best option. Not only does the value feel correct, if not generous for BrickHeadz, but the finished set of characters all include at least one interesting element, whether it be Kevin’s upside-down brick, Bob’s tiny size or Belle Bottom’s fashionable style.

BrickHeadz covers such a wide range of brands and ideas that those collecting them all may not always have the most interest in the subject of the sets, but even if you have no idea who the Minions are (feel free to share your secrets) it feels right to say you will still find yourself pleased with this set.

Support the work that Brick Fanatics does by purchasing your LEGO Minions or BrickHeadz sets through one of our affiliate links.

How long does it take to build LEGO BrickHeadz Minions 40421 Belle Bottom, Kevin and Bob?

This set provides a somewhat short build, as is to be expected with BrickHeadz. Though you may find yourself taking some time to appreciate the design of Belle Bottom’s afro, the process will only take you around 25 minutes.

How many pieces are in LEGO BrickHeadz Minions 40421 Belle Bottom, Kevin and Bob?

A total of 309 bricks make up the models, of which 11 are printed. Belle Bottom features a pair of golden chains across her violet dress while Kevin and Bob both have a pair of striped tiles for sleeves.

All three BrickHeadz measure 5cm wide and 5cm deep, but where Belle Bottom is 10cm tall, Kevin is just over 8cm tall and Bob measures just over 5cm tall.

How much does LEGO BrickHeadz Minions 40421 Belle Bottom, Kevin and Bob cost?