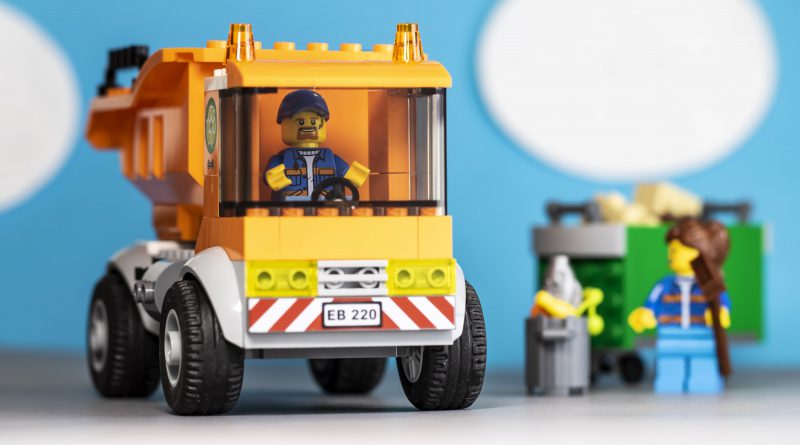 It’s time for the younger fans out there to clean up with LEGO City 60220 Garbage Truck – will it provide anything for those beyond the age of four?

LEGO City 60220 Garbage Truck is part of the newly rebranded 4+ range (previously it was labelled as the Juniors theme) and offers the youngest of fans an introduction into the world of LEGO by way of constructing a bright orange refuse truck alongside a brick built skip and various pieces of ‘rubbish’ to tidy away. Doing the cleaning are the two included waste collector minifigures. 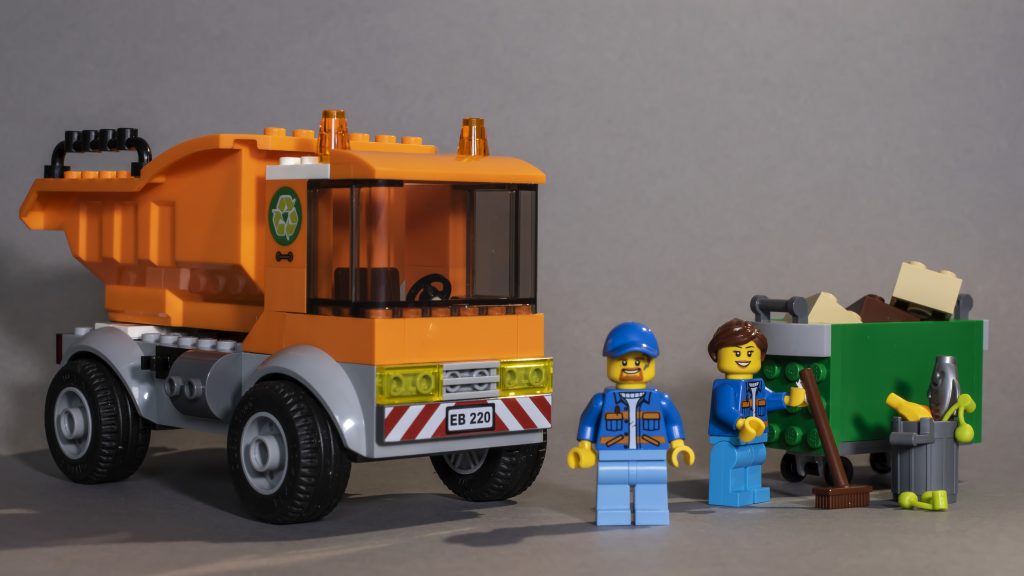 60220 Garbage Truck is an update of an old Juniors set released in 2015, 10680 Garbage Truck. Back then the colour scheme was green, with this time it released in bright vibrant orange, which is perhaps not as authentic as the original but certainly more eye catching.

The set contains two bags and a large chassis. 4+ sets are designed to be easy for little hands to be able to build by themselves and so most of the parts are large and easy to assemble.

Despite the ease the build is still fun. It’s also pitched at the perfect scale of being just deep enough without losing the attention of a young builder.

The overall look of the truck is a little on the blocky side but rubbish trucks are hardly the most aesthetically pleasing things to look at at the best of times.

One big advantage that 4+ sets have over regular sets is that there are no stickers, opting for printed parts instead. In this case there are two 2x2x2 orange bricks with a printed recycling logo and a 1×6 tile with a license plate reading EB220. 220 is the last digits of the set number, perhaps EB are the initials of the LEGO set’s designer?

Also included in 60220 Garbage Truck is a brick built skip in bright green, another vibrant colour choice that’s also in keeping with the real world. Using the bananas, plant pieces, fish, old roller-skates and brown and tan 2×2 bricks the designers have managed to create the look of a packed, rubbish filled skip. A really nice idea that looks very effective.

The two waste collector minifigures both have the same blue and orange uniform. The printing on the torso is good but nothing fans haven’t seen before. The male’s headpiece has been used in 13 other City theme sets since it was introduced in 2016, but here the brilliant printing on his face mimicking dirt and dust from a busy day refuse collecting feels wholly appropriate.

While the simplicity of this set may not be to everyone’s taste, older fans who enjoy creating their own LEGO City may find this is a cheap way of adding a nice sized truck with a decent amount of accessories. Young fans will love the satisfaction of knowing they have completed a LEGO set all on their own. The LEGO Group should also be applauded for bringing the notion of recycling to a young audience.

60220 Garbage Truck is available now at shop.lego.com. You can help support Brick Fanatics’ work by using our affiliate links.