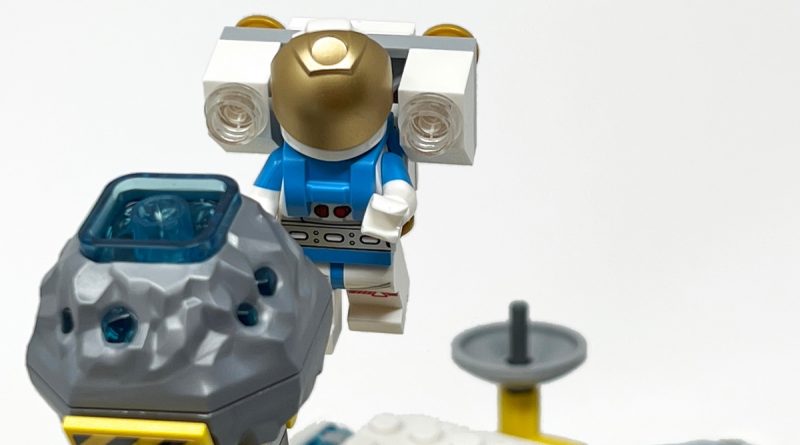 The LEGO Group is following in NASA’s footsteps by sending minifigures back to the Moon in 2022 – or, in the case of 60349 Lunar Space Station, in orbit around it.

There’s something quite magical about going to the Moon. Humans went there in the late ‘60s and ‘70s, yet haven’t set foot on it since. But all that’s about to change with NASA’s Artemis program, and in order to ignite children’s imaginations everywhere, the return of the LEGO Group’s CITY Space subtheme is heavily inspired by this new giant leap for mankind.

According to NASA, its proposed Gateway – which is what this set is based on – is ‘a vital component of the Artemis program, and will serve as a multi-purpose outpost orbiting the Moon, providing essential support for long-term human return to the lunar surface, and will serve as a staging point for deep space exploration’. Excited yet? We are!

To drive this home, the instruction book’s back page shows the similarities between this set and the proposed real thing. So let’s take a look at what’s on offer…

This isn’t the first time the LEGO Group has offered us a space station. In fact, we’ve had one as recently as 2019, set 60227, bearing the exact same name: Lunar Space Station.

If anything, that one was inspired by the International Space Station, but on a much smaller scale. Three cubicles made up the living areas, which were a real struggle to place minifigures in, and worst of all, once everything was closed up, you couldn’t really enjoy what was going on inside.

This new Lunar Space Station is an improvement in nearly every respect. The former was more accurate to a real-world space station, but this new design’s emphasis is clearly on play – and isn’t that the whole point of a toy?

You can see this immediately thanks to the eight large curved trans-light blue windows. Yes, in real life, it’ll invite all that deadly solar radiation in, but at least you can see and enjoy what’s going on inside. They’re also designed to open up giving you comfortable access to the inside for many play possibilities, and in contrast to the aforementioned 60227 Lunar Space Station, once everything’s closed, the light streams inside, enabling you to enjoy any scene you set up. This is definitely a case where less realism is a very good thing indeed.

You’ll notice handles in various locations inside and out – this is to help simulate microgravity, enabling you to pose your minifigures in various gravity-defying positions. The large living room area has a food dispenser, currently offering a banana, and a couple of workstations, one of which showcases an experiment with growing flora in space.

The lower decks are the crew quarters, where the team can relax listening to music, or chatting to family back on Earth. It’s great that the beds can be pivoted out of the way, but it’s a shame the fit is too tight to have someone sleeping there when the windows are shut: closing them forces the bed against the wall, preventing a minifigure from using it comfortably.

There’s a corridor leading to the solar panel section, and this one is like a worse version of the 2019 station: so cramped, you can’t even put a minifigure upright in it, let alone your fingers, but this is where they get access to the outside, so you can recreate that at least.

What is likely the station’s engineering section is where the solar panels are connected. There’s a device of unknown purpose that can be removed using a hatch, and doing so makes the panels droop down. It could likely be used to simulate some kind of maintenance. It’s about play features, remember, not realism. That’s exactly what the large yellow clamp is for as well: somehow, it allows the crew to catch wandering asteroids, and there’s even one that comes with the set (although unlike similar boulders included with other sets in this theme, this one doesn’t harbour signs of microbial life).

The back of the engineering section houses some thrusters that look much bigger than any kind you’d need to maintain a stable orbit around our Moon. Thanks to them, it wouldn’t be out of the realms of imagination to turn this station into a spaceship, pretending those engines can propel our station across the stars…

Actually, whether you’ll play with it as an outpost or spaceship, the 2019’s version could come in handy if you happen to own one. Since both sets use the same part to connect different sections of the base together, they are compatible, and you can indeed combine both stations with only very minor adjustments, helping you create a more substantial outpost.

Finally, there’s the shuttle based on Orion, the spacecraft that will be used to land humans back on the Moon. It actually looks pretty similar to the real-world proposal, despite the fact only a single astronaut can fit in the LEGO version. Still, it has a great canopy, allowing us to see what’s going on inside without straining our eyes, and space for some cargo (which in this case is a mysterious crystal).

There’s one thing we need to talk about though: stickers. There’s a lot of them for a set this small, and the hardest ones to apply are the three on that canopy (yes, three!), and the Classic Space logo on the hatch leading to the maintenance device.

Wait a second: did we say Classic Space? That’s exactly right: despite the fact these sets are advertised as being inspired by NASA, you won’t see a NASA logo anywhere. Instead, the LEGO Group has revived its much-loved Classic Space logo, representing a ship orbiting a planet (and making it look like Saturn in the process).

The 2019 CITY Space sets didn’t have it. Instead they bore a logo that was some sort of modern rendition of it, but without its charm. Without its soul. Here, you’ll see that gorgeous traditional logo throughout: outside on the Orion-like shuttle, for instance, and inside by the banana dispenser and computer displays. Any fan of the LEGO Group’s venerable in-house space theme will be delighted by this. And best of all, you’ll also find it on the minifigures’ outfits.

Five minifigures make up the crew, only one of whom is named: Rivera, the shuttle pilot. You’re free to christen the others however you please. The outfits are definitely the highlight of the show.

Rivera’s pilot suit is orange with dark azure tubing, and a cool Classic Space logo on the right. That logo is also present on the simpler dark azure jumpsuits, as worn by the two crew members who stay inside the station. The spacesuits for EVA are again heavily influenced by those that will be used in the Artemis missions, complete with blue shoulders, and these are the only ones that don’t have that famous logo on them, but they make up for that with a large one on the back of their life support system.

Rather than using an existing all-in-one mould for these PLSS (Portable Life Support Systems) as was done in the past, the designers have opted for the brick-built approach. The clear advantage here is that you’re able to create any kind of gear. For instance, one crew member has a lightweight PLSS, consisting of a handful of parts, while the other has a much bulkier one, based on NASA’s EMU (Extravehicular Mobility Unit), allowing them to move around outside the station without having to be tethered to it.

Unfortunately on our gravity-bound planet, this brick-built EMU is so heavy, the minifigure wearing it can’t easily balance themselves unaided.

The spare hair pieces are very much appreciated: when you remove the helmets, your astronauts don’t have to wander around bald. It’s a small touch that’s very welcome, and adds to the play features.

There’s this unwritten rule that a good value set should cost around or less than 10 pence per piece. At £55 for 500 parts, this one falls short, but does that mean it’s not good value for money?

On the contrary, there’s immense play value in this set, from a detachable spaceship, a detailed multi-levelled interior, the ability to simulate catching a rogue asteroid, or doing external maintenance and repair. You’ll have fun building it, and younger fans will enjoy playing with it for sure.

Of course it would be better if it were cheaper, but everything is getting more expensive these days. If you can afford it, you’ll definitely enjoy it.

If you’re a fan of space exploration and would like to pass that love on to your children, this set has a lot to offer. Not only is it a representation of a very-near-future reality, it’s a great toy, with many play features built in, and with no antagonists or weapons in sight, proving you can have fun in space without having to kill anyone – human or alien. Shame about all the stickers, mind.

If you loved the original Space sets from the ‘70s and ‘80s, you’ll definitely appreciate the new minifigure outfits, which massively update those vintage spacesuits for the modern era. And about time too!

How long does it take to build LEGO CITY 60349 Lunar Space Station?

60349 Lunar Space Station’s build is rather simple and straightforward – the trickiest part would be the application of stickers. Expect it to take a little over half an hour to build in a continuous session.

How many pieces are in LEGO CITY 60349 Lunar Space Station?

There are exactly 500 pieces in LEGO CITY 60349 Lunar Space Station, which includes an oh-so-useful brick separator, and five minifigures brave enough to face the unknown together.

At 32cm long (including attached shuttle) by 30cm wide (solar panel to solar panel) by 22cm high (including the asteroid grappler), 60349 Lunar Space Station provides ample room for play. There’s tonnes of opportunity for adventure around the base itself, and the main living area is roomy enough for even large hands to manipulate the figures without (too much) discomfort.

How much does LEGO CITY 60349 Lunar Space Station cost?