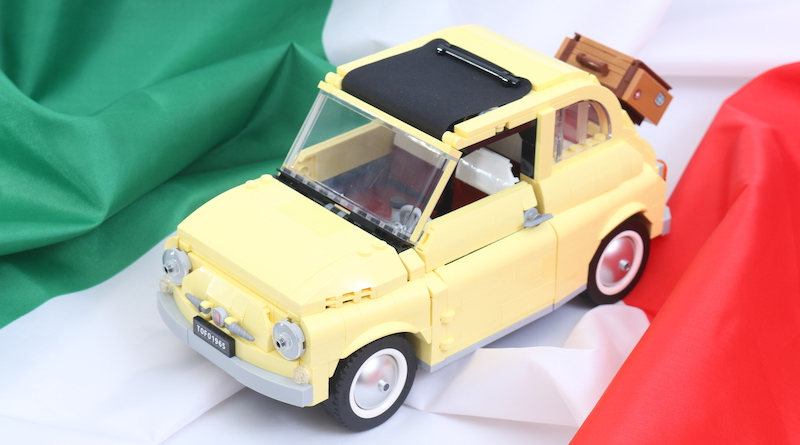 The embodiment of 1960s Italian car design, it’s about time that the LEGO Group released a Fiat 500, and 10271 doesn’t disappoint

Inexpensive and practical by design, the Fiat 500 launched in 1957 as a rear-engineered, four-seat, two-door city car, with a simplicity that targeted the more money-conscious driver for its fuel economy and low maintenance costs – local shops stock essential spare parts for the Cinquecento, even in rural areas.

By today’s small car standards, it’s tiny and is more comparable in size to a Smart car than any current car manufacturer’s equivalent model. And it was created that way, with the company’s brief to designer Dante Giacosa to imagine the smallest possible car that four people could fit into, using the least amount of steel at a time when that material was expensive in Italy. From the bubble-like nature of the chassis and the placement of the engine in the back, to the small rounded headlights and shiny silver hubcaps, budget and practicality informed design in every detail.

That it went on to become one of Italy’s most iconic vehicles and to this day is lauded as the original city car is testament to its design. It wasn’t the first city car (even though it was released two years before the Mini it took inspiration from the earlier VW Beetle), but it got it right.

Pleasingly, everything about the Fiat 500’s nature and style is perfectly captured in LEGO form with 10271 Fiat 500. The LEGO Creator Expect set is based on the 500 F model that was launched in 1965 with a roof that could fold halfway back as per preceding model the 500 D, but that unlike the original 500 Nuova and the D, dropped the ‘suicide doors’ (doors that opened the opposite way out) in favour of front-hinged doors.  A low-cost version of an already low-cost car, the 500 F stands as the quintessential example of everything both simple and classic about the Cinquecento.

This is translated into LEGO through a straight-forward but effective build, courtesy of an instruction booklet that, surely by no coincidence, is better described as a car brochure. It’s built in ‘cool lemon’, a lighter shade of yellow not seen at this piece count before but, aptly named, in how it effortlessly complements the LEGO-effect lines and curves of the 500 F. It’s a cool colour that adds a level to the model that primary red, for instance, would not have added.

10271 does include a handful of stickers, but they are used in a way that offers a nice contrast against the cool yellow, making, for example, that iconic ‘Nuova 500’ badge at the back stand out, as well as the cooling vents for the engine (located in the back of the vehicle). The luggage on the back is also covered in stickers that continue the overall youthful explorer vibe.

The build itself is really clever, using curved slopes and pieces to create the Fiat 500’s unique shaping; the bonnet, the wheel arches, the back window, the doors and the boot are all intrinsic design features to the real world car and all expertly captured in LEGO form. It is not just the exterior where the design team has been creative with shapes – opening the door you are looking at seating that also cleverly reflects the tight and cosy feel of the 500.

The play features are aligned with all the quirky things people know and love about the Fiat 500F, with the engine hatch that opens to expose the engine where in most other cars you would expect to find a boot, and the bonnet that opens to expose the spare wheel. The brightly colored red and white two-tone seats are another feature of the original 1965 Fiat, and these seats also recline forward as you would expect them to. The cloth roof folds halfway along the top of the car, exactly as it does on the real world equivalent – everything that is identifiable in design to the Fiat 500 F is found in and acts exactly as you could hope it would in 10271 Fiat 500.

The number plates can be rotated, as you are given three variations; Italian, German and Danish, which you can change simply by swapping two tiles around. The car moves forwards and back on the wheels, but there is no functioning steering, no moving parts in the engine nor a gearstick that is anything other than cosmetic; ultimately, this is a car you will want to display rather than play with, a model that celebrates a 1960s classic in design primarily through style than function.

LEGO fans and petrol heads alike will find plenty to love about 10271 Fiat 500. This is a LEGO model that captures its source material faithfully, literally and, most importantly, in that ‘dolce vita’ spirit.

10271 Fiat 500 is available now at LEGO.com. You can help support Brick Fanatics’ work by using our affiliate links.