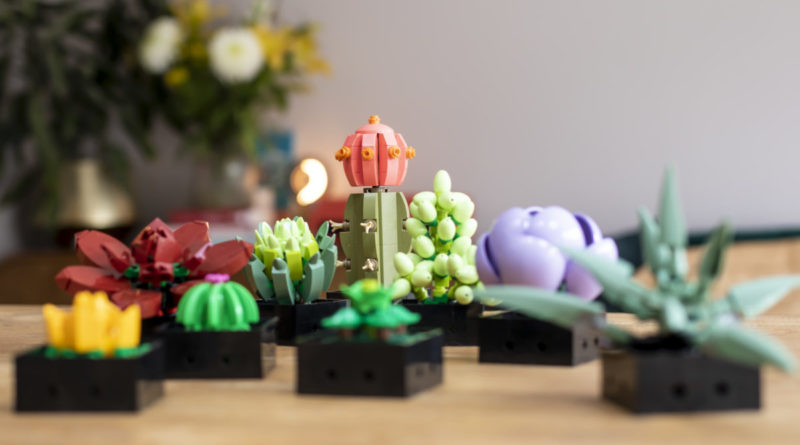 LEGO Creator Expert 10309 Succulents boasts a varied collection of plants, but doesn’t have the same wow factor as its contemporaries in the Botanical Collection.

The Botanical Collection is truly blooming now, and what began with 10281 Bonsai Tree and 10280 Flower Bouquet has grown into quite the LEGO garden. Each passing set feels like it’s adding more style and elegance to the theme, with brick-built pots, soil, air roots, leaves and even small budding flowers. They look fantastic on display and are often hard to distinguish from the real thing.

At first glance, it doesn’t feel like 10309 Succulents quite lives up to the same standards. Succulents are fairly compact plants, designed to be placed into nooks and crannies, bringing a piece of nature and adding a splash of colour to any small space. But because of this size, the LEGO recreations don’t appear to be as visually stunning as some of the larger models.

Still, with nine different plants to construct it certainly feels like a varied and inventive entry into the Botanical Collection – but will that alone be enough to tempt you to branch out, and add 10309 Succulents to your own collection?

Three bags contain the 771 parts required to build the succulents, along with three instruction manuals that allow up to three people to build this model simultaneously

The build offers a varied experience with nine different and unique plants to construct. There’s the compact and delicate Orange Echeveria and the larger Lavender Echeveria, the spiny Aloe, the unusual Hen and Chicks, the tall and spiky Moon Cactus, the round Ball Cactus, the unique grape-like Burro’s Tail, and one other that the manual fails to name – and unfortunately our horticultural knowledge isn’t expansive enough to recognise it.

Each plant is built on to an identical 8×8 base that’s designed to be modular, allowing each plant to be displayed on its own or connected to any number of the other eight. This is a welcome approach, as the LEGO plants can be spread around the home or office, or grouped together to make one large display.

However, compared to some of the other brick-built pots that have featured in previous Botanical Collection sets, these feel incredibly basic. They are black and blocky, with Technic axle holes visible on all sides, giving an unfinished look to the whole set. There are a few pictures of real succulents in the manual planted in really stylish pots, making you wish the designers had gone with something similar.

Because each individual plant is so compact in design, the overall build experience is not as deep and as involved as some of the other models within the theme. That’s not to say the same level of ingenuity is not present throughout, though. Once again, there’s a fantastic mix of parts, ranging from standard System bricks and Technic pieces to more unusual elements like animal claws, which make up the spines of the Aloe plant, recoloured dinosaur eggs – used for the buds on the Burro’s tail – and most inventively, Forestmen hats deployed for one of the plants’ leaves.

With nine different plants to construct it is to be expected that some will be stronger designs than others. The Hen and Chicks’ layered curved slopes are enjoyable to construct, the Aloe’s spikes and the Burro’s Tail’s rounded leaves are both realistically recreated, and the Moon Cactus is actually a fairly involved assembly. It’s a really well-designed model, with 2×4 slopes building perfectly-shaped sides, curved tiles recreating the ridges of a cactus plant excellently, and the tan 1L bar with prongs feel appropriately spiky to touch too. The flower that sits on top is equally impressive, with the coral colour scheme adding a real vibrancy to the entire set.

Not all of the plants are of the same high standard, though: the Lavender Echeveria, for example, looks a little unfinished with its exposed 2×2 round plate. It’s also a slightly confusing assembly, with the manual not making the petals’ connection method entirely clear. The ball cactus is perhaps too simple a design, and again the exposed parts used for connections break the illusion of it being real.

While there is absolutely nothing inherently wrong with this set, the main issue with the succulents is that they’re too small to make an impact. Where sets like 10281 Bonsai Tree, 10289 Birds of Paradise and the new 10311 Orchid all have quite a dominating presence, the succulents just get a bit lost when on display.

They lack the style and elegance that some of the other models offer and they fail to create the illusion of being real plants, which is one of the main selling points for the Botanical Collection. On paper, this set seems like a good idea, but in reality it just doesn’t quite work.

As with all models in the Botanical Collection, there are no minifigures included in 10309 Succulents.

Considering there are 771 pieces included in this set, the price point seems reasonable. It’s well over 100 more parts than 10311 Orchid (also releasing on May 1), and so feels like a fair deal.

However, the build experience feels incredibly short, and at no point does it ever feel like you are constructing a set that’s made from over 700 pieces. Assembling all nine plants won’t take long at all, and with the exception of a few smart designs nothing about the model really stands out as a whole.

Once finished, it also doesn’t offer the same level of displayability that others in the theme do, and rather than looking like a piece of art built from LEGO, it just looks like a collection of small LEGO models.

From a price-per-piece perspective, there can be no complaints about the retail value of the set, but overall it really doesn’t feel like you are getting much bang for your buck.

10309 Succulents is a set that feels a bit like choosing pick-and-mix sweets with your eyes closed: there will definitely be some things you absolutely love, and there will be a few things that you really don’t like. Compared to some of the other sets in the Botanical Collection, it just feels a little hit and miss.

It doesn’t have the elegance of 10311 Orchid, or the involved and deep build experience of 10281 Bonsai Tree, or even the displayability of 10280 Flower Bouquet, and yet it contains the third-highest piece count across the entire subtheme.

There are some exciting designs within the set, some brilliant techniques, amazing and ingenious parts usage, but as a whole it doesn’t quite offer as complete an experience as other botanical models. It feels like it’s had a lot of love and care put into the design, which makes it harder to be critical, but overall perhaps succulents in general are just the wrong types of plants to try to recreate in LEGO.

Support the work that Brick Fanatics does by growing your Botanical Collection using our affiliate links.

How long does it take to build LEGO Creator Expert 10309 Succulents?

Despite 10309 Succulents having a fairly sizeable piece count, each plant comes together very quickly. In total expect to spend no more than 90 minutes completing this set.

How many pieces are in LEGO Creator Expert 10309 Succulents?

There are 771 pieces in 10309 Succulents, which places it among the higher part counts of the Botanical Collection’s sets.

10309 Succulents measures 13cm high at its tallest (the Moon Cactus) and 17cm wide. But with nine individual plants that are designed to be modular, these measurements can vary widely depending on how you decide to display the set.

How much does LEGO Creator Expert 10309 Succulents cost?