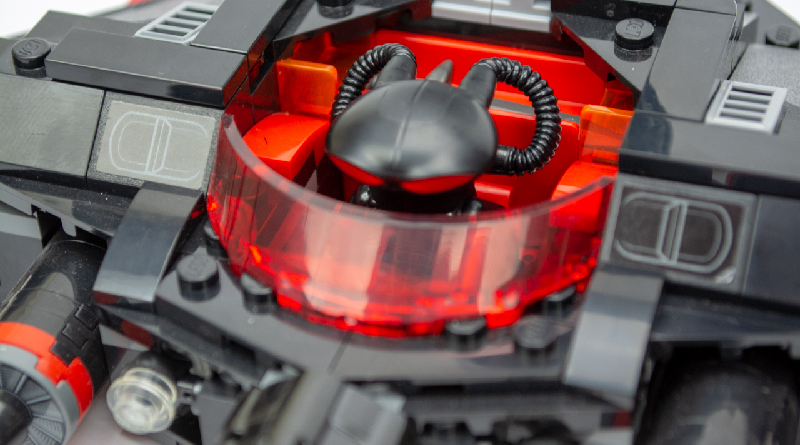 He may have not always be the most popular member of the Justice League, but with his own solo movie debut ahead, does the only Aquaman tie-in LEGO set make a splash?

While LEGO DC Super Heroes always takes a mix of source material for inspiration, including comic books, animated television and video games, it does not always cover a wide range of characters. With Aquaman soon to appear in his own solo movie, this set is based on the character and film of the same name. Naturally it includes an underwater vehicle, fishy friend and fellow Atlantean.

The job of a LEGO designer must bring with it certain challenges, but even more so when you’re tasked to build the sole movie tie-in set, representative of a (probably) on-screen vehicle and still fit within the confines of a price point and piece count.

There are two builds in 76095 Aquaman: Black Manta Strike, with the first one far more appealing than it has any right to be. Using just five pieces and a LEGO shark, it’s not really much of a build, but seeing a shark suspended above the floor level helps reinforce the underwater nature of the set. I’ve not thought of plonking a shark on top of a seaweed element before but it works and really helps the shark to stand out. Did I mention you also get a shark in this set?

The main element of the set is the very stealthy-looking Black Manta submarine. For a vehicle with enough black to keep even Batman happy, I did not think I  would be that excited about it as a model, but once built I found it to be surprisingly satisfying. Extremely swooshable for those underwater battles, the most impressive part is how similar to a manta ray’s silhouette it is – right down to the cephalic fins at the front.

As a build it is very simple with no techniques that stand out, but the unusual shape does allow for a bit of variety in slope-type elements punctuated with two missile launchers and a six-barrel shooter on the front for added play value. There is room in the cockpit for one driver, Black Manta (obviously), but I also appreciate the small compartment to store his sword as, more often than not, minifigures end up losing weapons they can’t take on board their vehicle.

If you dislike stickers then you are in luck, as only five small ones are included which probably wouldn’t be missed should you accidentally throw the sticker sheet in the bin first.

Three minifigures are included in 76027 Black Manta Deep Sea Strike with our hero, Aquaman, and his love interest, Mera, as the protaganists with just the one villain (and set’s namesake) – Black Manta. Straight away I am impressed with just how accurately the minifigure portrays Jason Momoa’s Aquaman. The double-sided face is spot on, and the hair piece with its touches of bleached highlights amid the tangled locks look excellent. The green/gold colour combo for the torso and legs works well with the level of detail in the printing of his scaled suit really showcasing The LEGO Group’s forte in production. Aquaman is equipped with a trident in gun-metal grey and a trans-light blue power blast weapon and there’s no doubt he will be a big draw for minifigure collectors.

Mera (played by Amber Heard in the upcoming film) is a character I’m less familiar with but that makes her no less appealing thanks in large part to her eye-catching teal colour palette with metallic blue scales. Her hair is an often-used female hair piece that I can’t help but wonder if red would have matched better than the dark orange, though it could just be the lighting in the trailer. Perhaps that would have been a step too far towards Disney’s Little Mermaid wardrobe. Mera also sports a double-sided face – one angry and one half smiling – that doesn’t have a likeness as good as Aquaman’s did, but fans of flesh-coloured faces will enjoy a new option for their own creations.

The final minifigure included is Black Manta, whose design is a significant step-up compared to the one released in 76027 Black Manta Deep Sea Strike. Mostly black with a few hints of red and lighter outlining, he matches the colour scheme of his submarine and looks very stealthy with a unique moulded headpiece and just one sword as his hand weapon of choice.

For collectors of film related or super hero minifigures then this is going to be a must-have thanks to the excellent figures included. The set itself is enjoyable for a few minutes, but definitely more appealing for a younger demographic. I found its lack of colour and interesting build techniques the main let down as an AFOL, but if you are a younger fan this might be the set for you.