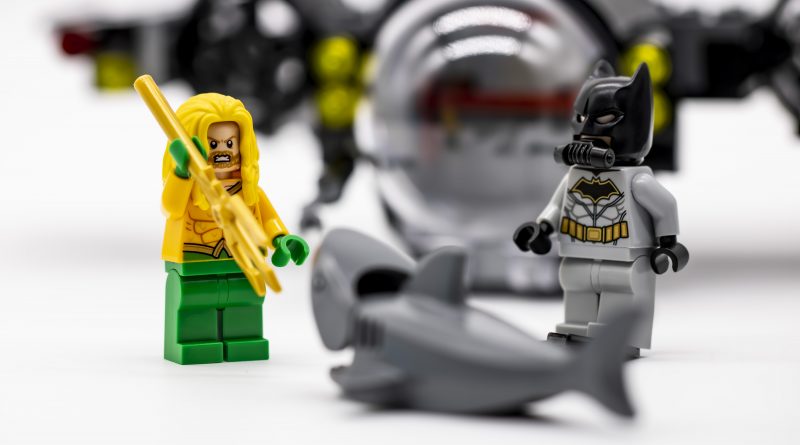 Holy underwater vessel Batman! Can 76116 Batman Batsub and the Underwater Clash deliver an original design that will appeal to DC fans and casual fans alike?

On the face of it, 76116 Batman Batsub and the Underwater Clash is a fairly simple set. 174 pieces are all that are needed to construct Batman’s underwater vessel, that is a reminder that Bruce really is prepared for anything. When digging into the set though, it is actually packed full of fantastic accessories, interesting and unusual parts, as well as three great minifigures – two of which are exclusive.

When thinking of Batman, the first image that comes to mind is definitely not battling under the ocean in a submarine, but in the LEGO DC Universe, anything is possible. This Batsub is a completely original design however with the recent wave of LEGO Batman sets pitting the caped crusader against various foes on air and land it makes perfect sense to head beneath the waves too – there are no limits to where this hero will go.

The build unusually begins by assembling bases for Aqua Man and Ocean Master. It is somewhat unique to start a set by building bases for minifigures, but why not mix things up? The bases use a number of trans-blue parts to give the impression Aqua Man and Ocean Master are hovering on jets of water. The bases look amazing, working well for play, but even more so for display. They tie into the source material perfectly, when both characters are placed on the bases they look like they have jumped right out of the pages of a comic book.

Once Aquaman and Ocean Master’s bases have been assembled, it is on to the main build – Batman’s sub. There are four sub-assemblies (pardon the pun) that connect via Technic pins. The hull of the sub uses 4×4 plates with cut-out corners, inverted slopes and curves, to create a nice shape for the back of the vehicle. A colour scheme of red and black is introduced early on and runs throughout the build, adding instant cool to the final design. The engines take advantage of two large black elements with seven blade propellers affixed. They look strong, powerful and very much in keeping with a vehicle of this type.

Batman’s cockpit uses a couple of 1×2 printed sloped tiles for controls and 1×6 arches to create the shaping of the roof. The round dome for the cockpit and droid arms added to the front really help give the vehicle the appearance of a real life underwater submersible. Once the cockpit is added to the rest of the build it takes on a more comic book appearance, again in keeping with the source material. A Batman sticker is added to the top, as this hero always lets his enemies know who has arrived.

The cockpit is fitted to the main body by just one Technic pin, which gives it an almost gyroscopic type movement – while simple, it definitely adds to the play value and swooshability of the set. The two water jets used for Aquaman and Ocean Master’s bases can also be swapped out and attached to the back of the sub to give the impression its gliding through the water. On the back is a 1×2 plate with arm used to store Batman’s flippers.

Putting the submarine together will not offer much of a challenge but by having the four different sub assemblies, it is a build that offers variety and is an enjoyable experience for what it is.

Two of the three minifigures are exclusive, namely Aquaman and Ocean Master. Ocean Master makes his LEGO debut in this set, so it is definitely one for the DC collectors. His mask is a recolour of the Atlantean Guards found in 76085 Battle of Atlantis and is exclusive for this set. His face includes two prints, one angry and one with his red visor down. He sports a magenta soft cape and has excellent printing on the torso.

Since his first appearance in DC comic books, way back in 1941, Aquaman has had more hairstyles than David Beckham. Here he is sporting long blonde hair, which ties in with his more recent comic book appearances. His face, of which there are two expressions, resembles Jason Momoa from the live action films so this minifigure is a real mix of modern day movie and comic book Aquaman. The printing on the torso is great, but it would have been nice to have printed legs too.

Although the torso and legs of Batman have been seen before, this variant could be classed as an exclusive due to the included underwater accessories. Once kitted out with flippers and the breathing mask he looks suitably dressed to join the other two minfigures under the waves.

The latest wave (again, pun intended) of LEGO Batman sets offers fans the opportunity to pit Batman against a host of his most famous villains and while Batsub and the Underwater Clash is really about Aqua Man and Ocean Master, this is still a fantastic addition to a LEGO DC collection. The inclusion of the two bases for Aqua Man and Ocean Master makes the characters really pop when on display, while the Batsub itself is simple but enjoyable to construct and looks great next to Batman’s more well known modes of transport. At this price, two exclusive minifigures, a shark and a great vehicle offers excellent value for money.

76116 Batman Batsub and the Underwater Clash is available now at LEGO.com. You can help support Brick Fanatics’ work by using our affiliate links.