Mulan makes her LEGO debut, as the fiercest of the Disney Princess clan rounds out 2018’s line of sets. Can her set be as awesome as she is?

41151 Mulan’s Training Day is the smallest set in the LEGO Disney theme, but contains the most desirable character in the current wave. Mulan is an absolute favorite in our house, so the news that she would be arriving in this LEGO release was cause for celebration – we had been waiting for her since the very first wave of sets. Priced like a LEGO Star Wars Battle Pack, acquiring her here will be a no brainer for many folks. 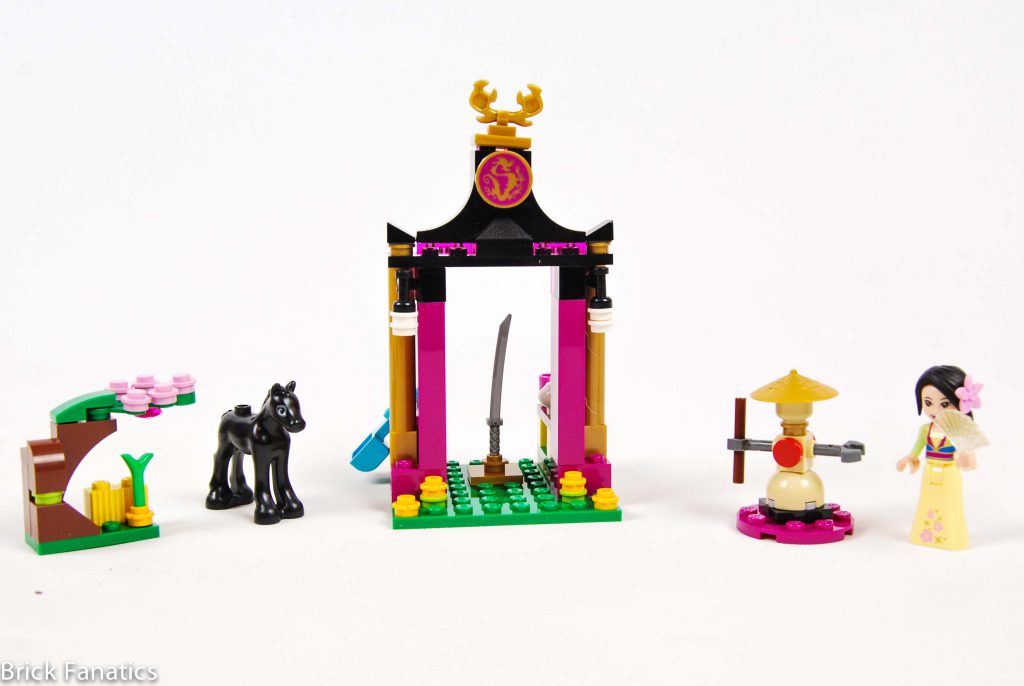 Mulan takes a cue from NINJAGO and trains here with a dummy. It is the first of a surprising and impressive number of shout outs to the film packed into a box containing around 100 pieces. Training dummies appear in the movie as the target of rockets, here mimicked with a catapult. Her father’s sword, the cherry blossoms he speaks to her under and the family war horse all make an appearance. So many references in such small set may be without precedent in the line. Some great parts and colours are used here, making this an excellent parts pack as well as a great set.

There are two disappointments with 41151 Mulan’s Training Day, both of which are likely a result of the price point. The first is that Mulan should really come in two different outfits. Both of my daughters commented that it was strange to see her in a dress with long hair, considering that she looks like that for only the first 20 minutes of the movie. I would imagine this choice was made in order to have her blend in better with the rest of the Princess crew. The second is that her noble and mighty war steed has been reduced to nothing more than a cute pony, which just feels wrong. A proper horse and saddle would be an unrealistic expectation at this price point.

With numerous references to the source material, an exclusive mini-doll and great parts, 41151 is about as good as a set this size can be. Whether you are a fan of the film, collect mini-dolls, or hunt for good parts, this set will not be a disappointment. Here’s hoping that we get Mushu included the next time that the LEGO Group visits Mulan’s world.