Will this new LEGO Disney set give Princess Aurora a castle worthy of her fairy tale ending, or will it leave her wishing she had never woken up?

The release of 41152 Sleeping Beauty’s Fairytale Castle marks the first time that two Disney castles have been released at the same time in the theme. Cinderella was the character who was given the first LEGO Disney castle ever produced back in 2014, when the world of mini-dolls expanded beyond Friends to the Disney Princess theme. She gets top billing again this year with a remake, in the form of set 41154 Cinderella’s Dream Castle. Though this set is smaller, much of the playability and even size of past Disney Princess castles can be found here, largely thanks to the exclusion of mini-models and stripping away of extraneous details. Let’s take a look at whether a no-nonsense approach works for this Sleeping Beauty inspired LEGO set… 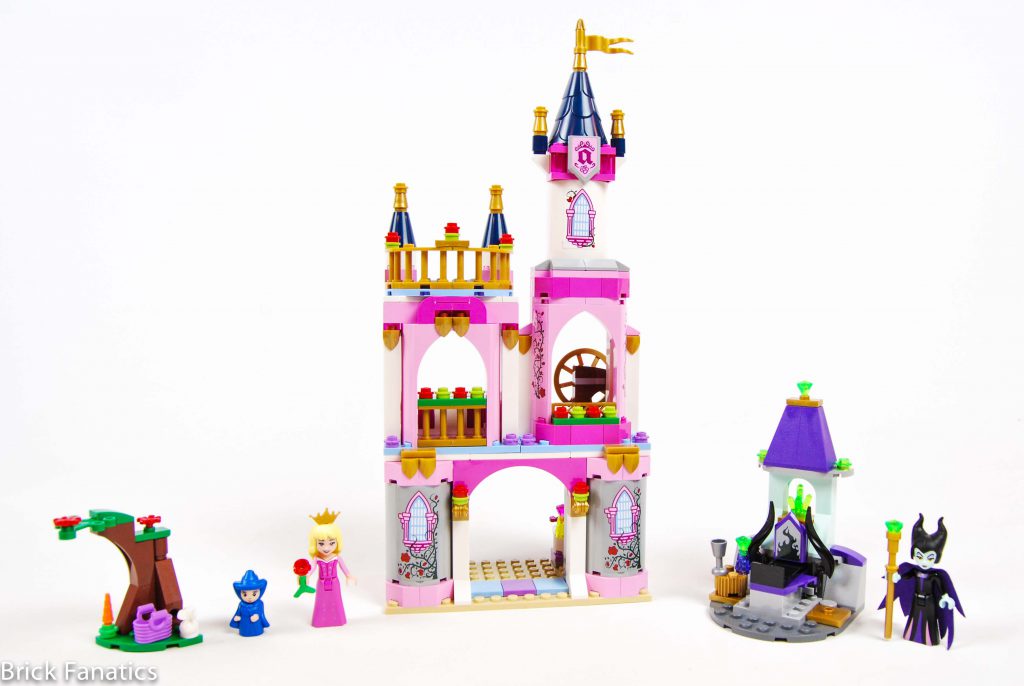 Fans of a certain vintage may remember that in the early days of the Castle theme, a variety of small, supplementary fortress sets were produced. Smaller than the proper castles available at the highest price points, these smaller sets served as a way for children to get much of the fun and playability at a fraction of the price. 41152 Sleeping Beauty’s Fairytale Castle seems to be trying to fill that same role here, coming in at almost half of the price of Cinderella’s larger home. These mid-sized sets were a fabulous idea back in the day and I am delighted to see this modern example – it is a trend that I hope returns in force. 41152’s interior contains everything needed for a delightful play experience, including a generous bed and multiple rooms.

41152 Sleeping Beauty’s Fairytale Castle is a tour de force in smart set design, and in that capacity serves as a repudiation of many Friends and Disney sets. A single extraneous model is included in the form of a small tree, because it would be wrong to have a Sleeping Beauty set without some reference to Aurora’s woodland upbringing. However, that is it. Sharp contrasts emerge with 41055 Cinderella’s Romantic Castle, which had five unattached models. Other features like castle doors have been excluded, but who needs them on a set like this? There are no Lion Knights laying siege. Such smart omissions take nothing from the model and allow parts to be put into height, width and figures. The end result is a focused model with almost all of its assets poured into the castle, which feels like good value – a rare find in these mini-doll based lines.

In keeping with the entire 2018 Disney range, this castle incorporates the modular swapping system. Each component of the castle is constructed to specific proportions, allowing them to be swapped with each other as well as with portions of other sets. Maleficent’s throne can be placed on the castle for her to rule over the kingdom in a feature that harks back to the Knights’ Kingdom II era of the Castle theme, when 10176 King’s Castle could be decorated in either friendly or enemy battlements.

The only odd thing about this set is the name. Considering it is just as much Maleficent’s castle as Sleeping Beauty’s, at least based on the decorations, a more apt name would be Sleeping Beauty’s Castle of Horrors. There is even an entire room devoted to the spinning wheel which sends her into a long slumber. Strange naming aside, this is an excellent set that allows kids to have a solid princess castle at a very reasonable price. Throw in the mini-dolls and this set emerges as a top choice for anyone looking to delight the Disney fan in their house.