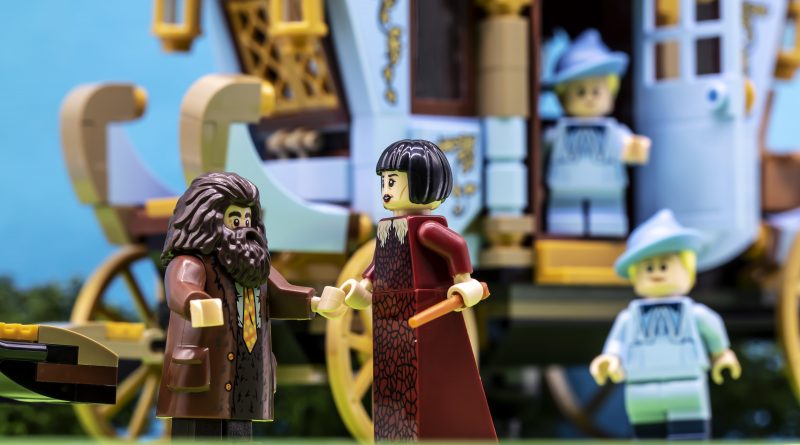 The LEGO Harry Potter theme has been adored by fans since it launched in 2001. With so many locations, characters and settings having been transformed into brick, it is quite an achievement that the LEGO design team can still find fresh inspiration. 75958 Beauxbaton’s Carriage: Arrival at Hogwarts marks the first time that the French magic academy gets its own dedicated set, recreating the opulent Abraxan horse drawn carriage that is briefly seen arriving at Hogwarts in Harry Potter and the Goblet of Fire.

The first thing that stands out in this set is the absolutely beautiful colour scheme of light royal blue and pearl gold. It is not only incredibly accurate to the source material but many of the included pieces are new in these colours including; light royal blue 1×1 and 1×4 bricks, 1x1x3 arches, 1x2x3 inverted slopes, 1x4x6 doors, 1×4 inverted curves and both sizes of the pearl gold carriage wheels. They all help to make a stunning final model and are great additions to any collection of parts.

The build is both smart and immensely enjoyable. The entire carriage has an ornate and refined design, helped by the clever angles created throughout. The windows are attached to two hinges and are forced into a slight angle by round corner plates. These then line up with the inverted slopes at the front, making for fantastic and seamless shaping. The light royal blue arches used at the front and rear of the carriage are also slightly angled to create a more elegant and interesting look.

The entire carriage is adorned with a collection of wonderful pearl gold parts that really add to the finished design. Lanterns (new for 2019 in this colour) hang from every corner, pearl gold studs are used for door handles, 1x4x1 fences are connected on their side and used for steps while 1×1 tiles with clips and are attached to 1×2 bars to overhang the doors. The carriage wheels are also pearl gold and, like the rest of the elements, look excellent when attached. Stickers add that final touch of class to the completed design.

This wouldn’t be a Harry Potter set without a spot of magic and fans can cast their own extension charm upon the carriage by folding out one entire side to create an interior space with enough room for all of the included minifigures. There is a small table for drinking tea and drawers for keeping spells, letters and potions. It is not the most detailed of interiors but it is certainly a lovely addition, with the colour scheme of dark red and dark blue complimenting the rest of the carriage.

The only thing that lets 75958 Beauxbaton’s Carriage: Arrival at Hogwarts down is the assembly that connects the two Abraxan horses. Compared to the rest of the build, which is sleek and classy, it just looks unfinished and messy. This could easily have been rectified with a pair of 2×4 tiles on either side. It is constructed at the last stage of the build and it just feels slightly rushed.

The horses themselves look splendid and both have two new wing pieces that attach to their main body. Both the legs and necks have articulation too. Seven Abraxan horses are seen in the film, but two is more than adequate when taking into account the scaling of this set.

All four of the minifigures are exclusive and are very nice additions to the Harry Potter collection. Hagrid shares the same torso design as his variants that appear in Hagrid’s Hut and Hogwart’s Great Hall, but here he has printing that reflects his Yule Ball outfit. The fur lined jacket and polka dot tie are splendid. He comes with his batons for directing the carriage safely to the ground and a bottle of single malt whiskey for feeding to the Abraxans.

As is to be expected from a half giant, Madame Maxime towers over most minifigures. Her 2x2x3 sloped dress piece and torso are printed to match the outfit she wears when first arriving at Hogwarts. It is a simple design but one that is very accurate to the film.

The two Delacour sisters, Fleur and Gabrielle, share the same hat and hair piece as well as the same torso, in keeping with the source material. Gabrielle has shorter legs while Fleur’s are dual molded. Gabrielle’s alternative expression is a nice nod to the film as well, capturing the look of her being put to sleep.

75958 Beauxbaton’s Carriage: Arrival at Hogwarts offers up a magnificently designed carriage that not only looks fantastic on display but allows for a lot of play opportunities. The minifigures and Abraxan horses will surely be desirable to fans and the large array of unique and new parts also makes this set attractive proposition.

All of these unique elements come at a cost and this is perhaps where the set falls down. Its price is not on the low side, especially considering the other price points of similar sized sets within the Harry Potter theme, which may put a lot of collectors off. It is certainly a set worth owning, it’s just a question of whether to get it now or wait for a reduction in price later down the line.

75958 Beauxbaton’s Carriage: Arrival at Hogwarts is available now at LEGO.com. You can help support Brick Fanatics’ work by using our affiliate links.