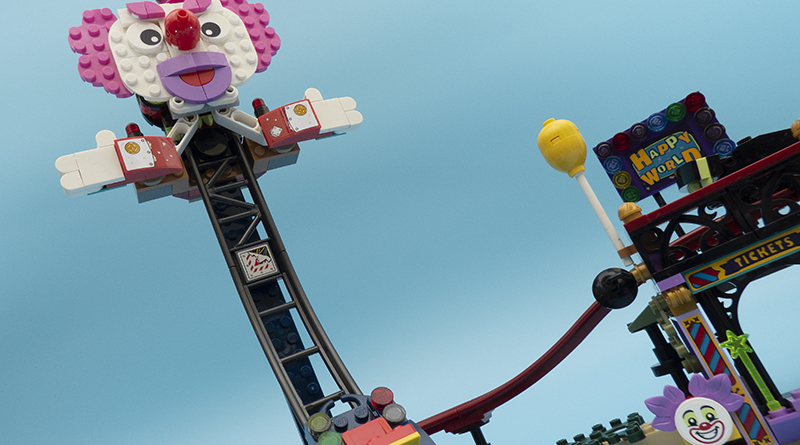 Jack and Parker are heading to the funfair in 70432 Haunted Fairground, but with this being Newbury, things are not as they seem. Happy Land has swapped out the ice cream for ice scream, with a few ghostly secrets hidden beneath the clownish exterior.

Whether 70432 Haunted Fairground is spookier in its regular clown configuration or more monstrous configuration depends on your mileage when it comes to clowns. Even those who do not find the circus staples creepy might make an exception for those found in this set, with the looming face above the funfair looking particularly menacing and the ‘Happy World’ sign seeming a bit too insistent. Given the horror movie staple of the dilapidated funfair, it is all very appropriate.

Because of the height and width of the set that the rollercoaster track elements achieve, this set is much larger when built than it appears in images. The £44.99 price feels justified, with this taking up a nice chunk of shelf space.

The cleverest aspect of the set is the vertical ride. Since being developed for 10261 Roller Coaster and appearing in 70922 The Joker Manor, rollercoaster track has been used frequently throughout the LEGO portfolio, in occasionally inspired ways such as for a sign in 41352 The Big Race Day. This is the most creative use yet though, as the rollercoaster track is used for a ride that goes up and down.

Thanks to a Technic-constructed lever at the base, a minifigure can be seated in a chair attached to a coaster car piece then sent flying upwards. A well-timed flick will send them all of the way to the top, where the cart triggers the clown face falling apart to reveal freaky Hidden Side face beneath. This ride also benefits the set as a rollercoaster alone would not have felt enough for a fairground, whereas two rides justify that name.

Used more traditionally, the rest of the rollercoaster track sends the minifigures on a short journey from above the ticket booth to an end point, with two clown hands flicking outwards to reveal spooky eyes beneath. The coaster carriage itself has also been taken over by something other-worldly. When it combines with the gates at the end, it becomes a scary monster face.

The ticket booth is a nice part of the set, with several authentic touches – a monitor screen so the attendant can see what is going on, an ice cream machine, ice cream cones and wands for sale, all in an ornate booth.

As with all Hidden Side sets, there is a colour wheel that can be turned as necessary when playing the game and plenty of parts to move as instructed when finding the many gloom points that the fairground is hiding.

Five minifigures are included in the set, with all three protagonists represented – Jack, Parker and Professor JB. All of them are excellent, with detailed printing and well-moulded hair/hat elements. Each of them have a printed 1×2 tile phone so they can go ghost-catching.

The two clowns are exclusive to the set, with wonderfully over the top fluorescent clown attire – the polka dot legs are particularly fun. As well as having silly clown faces they have alternate possessed faces and additional ghostly elements.

Ultimately this set just about works for what it is, but as is the case for many of the sets that use just a little rollercoaster track, it is not particularly satisfying. It may have worked better had the coaster track parts been jettisoned in favour of more regular elements so there could have been more fairground games or other rides – as it is, there is not a huge amount of building and the set looks almost unfinished.

That said, it is hard to criticise the vertical ride and the minifigures are excellent. This is one that is strictly for LEGO Hidden Side fans and even then, should not be top of the list.

70432 Haunted Fairground is available now at LEGO.com. You can help support Brick Fanatics’ work by using our affiliate links.