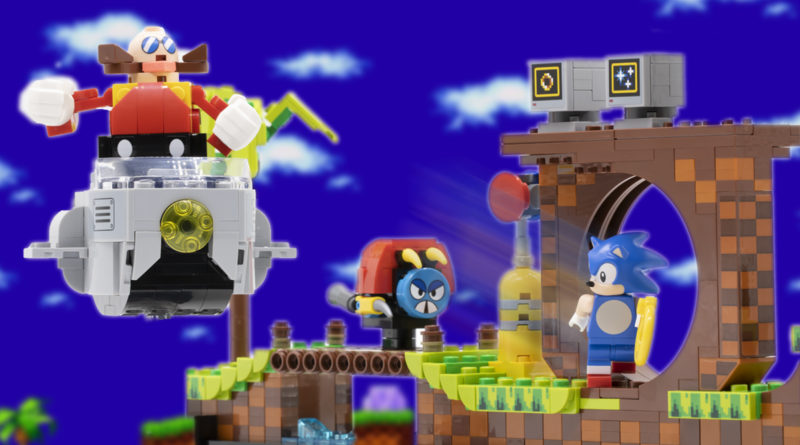 Thirty years after zooming on to our screens, the Blue Blur is back in the charming (if occasionally repetitive) LEGO Ideas 21331 Sonic the Hedgehog – Green Hill Zone.

In the late 1980s, Nintendo dominated the video game market, and its Bowser-battling Italian plumber Super Mario was king of the hill when it came to video game mascots. That all changed in 1991 when SEGA introduced the world to its lightning-fast blue hedgehog.

The original Sonic the Hedgehog game on the 16-bit SEGA Mega Drive (or Genesis for our friends across the pond) was unlike anything we’d seen before. It was super-fast, super-fun and super-cool. Kids and adults alike couldn’t get enough of Sonic, and the game quickly became one of SEGA’s biggest sellers. The first level, Green Hill Zone, is not only ingrained into the memories of ’90s gamers, but it’s also one of the most iconic video game levels of all time.

Fan designer Viv Grannell’s Green Hill Zone model hit the fabled 10,000 votes on LEGO Ideas in 2020, and while the finished product isn’t exactly the same design (there are a few notable differences) it still maintains all of the charm and instant recognisability of the original submission. But as a complete set, will LEGO Ideas 21331 Sonic the Hedgehog – Green Hill Zone be a fitting tribute to one of gaming’s most endearing icons?

The build for 21331 Sonic the Hedgehog – Green Hill Zone is spread across six bags. The first four are used to construct the level’s landscape, the fifth bag adds all the relevant details, and the last focuses on Sonic’s rival Dr. Robotnik. It all begins with a small display base where both Sonic and the seven Chaos Emeralds (the objects of Sonic’s quest in the game) can be placed.

Only one emerald is provided to begin with, but as a nice touch throughout the build, another Chaos Emerald is added to the base with each bag – replicating the sense of completing an in-game level. It’s a really smart idea, and a great way to connect the LEGO set to the classic video game.

The main structure for Green Hill Zone is designed to be modular with four interconnecting sections, each just four studs wide. There’s a palm tree that makes up the beginning of the stage, a bridge that traverses water, a vertical loop (an iconic mainstay of the franchise) and a spring jump. Each section is identical on both sides, with the exception to this being the last section, which contains the model’s solitary play feature.

The large spring pad flings Sonic high into the air (achieved using Technic pins to create a hidden lever), helping him to collect the three golden rings that sit just above it. The model is designed predominantly as a display piece, but it’s always nice to have a few working features included too.

Compare 21331 with some of the recent LEGO Ideas sets we’ve been treated to, and it’s probably fair to say this isn’t the most innovative build, given most of the level comes together in a pretty straightforward way – but what it lacks in innovation, it certainly makes up for in authenticity and outstanding accuracy to the source material.

The palm tree and bridge, checkpoint, golden rings (recreated using yellow minifigure life preservers), power-up monitor boxes (complete with optional stickers), badniks and loop – which Sonic famously flies around at breakneck speed – have all been faithfully recreated, and there’s even a hidden Easter egg to be discovered on the back of the set that we won’t spoil for you here.

These added details really bring the set to life, and those familiar with the original Mega Drive/Genesis game will feel right at home. Once complete, it will be very difficult to get the original Green Hill Zone theme tune out of your head.

This level of accuracy also extends to the set’s badniks (Dr Robotnik’s minions). Both the Motobug and Crabmeat are incredibly well-designed and, as the LEGO Super Mario theme has shown, recreating 16-bit pixelated characters with LEGO System bricks works an absolute treat.

The level uses just four colours in its design – lime, green, brown and nougat – reflecting the same colour scheme that features in the original video game. The browns and nougats are assembled as a checkerboard, recreating the in-game art design incredibly well.

However, achieving the checkered design requires stacking numerous 1×1 plates atop one another, which looks effective, but quickly becomes monotonous – especially  towards the latter stages of the build. The inclusion of the new two-plate high brick would have made this technique a lot more bearable, but LEGO Ideas Design Manager Sam Johnson has already nullified that idea. It’s absolutely worth persevering, though, as the final look is absolutely spot on.

Sonic wouldn’t be complete without his arch-nemesis, Dr. Robotnik, to battle against. The design of this iconic villain within the official set is the biggest departure from Viv Grannell’s original design. In the Ideas submission, Dr. Robotnik appeared operating a giant robot mech, while here he’s a much smaller brick-built figure, but does also come complete with his flying Eggmobile.

It keeps the entire set tied to the original Sonic the Hedgehog game (rather than Sonic Mania), and allows for the evil Doctor to be displayed either inside the Eggmobile or standing outside.

Constructing both the character and his mode of transport is actually a really enjoyable section of the build, and makes for a great way to finish the set. The Eggmobile looks as much of a crazy contraption as it does in the game, using the relatively new 1×5 plate for the sides and 2×3 curved slopes to create the rounded shape. It’s finished off with both printed parts and stickers.

A single strip of black tiles runs along the bottom of either side of the base, which gives the final look a really smart finish, and caps off a brilliantly nostalgic experience for older fans – just be mindful that a certain level of patience is required for all those 1×1 plates.

Four characters are included within the set, although only Sonic comes in the form of a traditional a minifigure. He’s updated slightly from his original LEGO Dimensions variant, with the most notable change being the adorable shoe buckles printed on to the bottom of each leg. For those who missed the Blue Blur the first time round, this latest version will make a great addition to any collection.

Of course, this set wouldn’t be much fun if Sonic had no badniks to destroy, so two of the most iconic enemies from the original game also make an appearance: a Motobug (the first enemy that Sonic ever encountered in a video game) and Crabmeat. Both are brick-built, exhibit smart designs, and recreate their on-screen counterparts to a tee. Motobug comes with two stickers for the face, one displaying a peaceful expression, and the other much more menacing.

Completing the cast of familiar faces is Sonic’s arch-nemesis and all-round bad egg, Dr. Eggman (also known as Dr. Robotnik). Revamped from the original fan submission to include his Eggmobile, Dr. Robotnik is another cleverly-designed brick-built character featuring a printed 2×2 round dome for his bald head.

He looks pretty accurate to the original game, although fan designer Viv Grannell has already shared instructions for how to make him even more authentic. Overall, it’s a great cast of characters that look wonderful populating 21331 Sonic the Hedgehog – Green Hill Zone.

We’re only a couple of weeks into 2022, and already the price of LEGO sets has become a contentious subject. Across a number of themes, fans in the UK appear to be getting a raw deal yet again, and price increases across Europe are causing upset among enthusiasts of all ages.

Thankfully, we’re happy to report that 21331 Sonic the Hedgehog – Green Hill Zone is a set that comes in at great value. The piece to price ratio feels fair, the Sonic minifigure is brilliant and his brick-built enemies are full of charm.

While the finished product isn’t one of the biggest Ideas sets on the market, the build is surprisingly involved, and the final model makes for both a wondrous display piece and a solid playset for younger fans (despite that 18+ label on the box). Given the wider conversation currently going on around the LEGO Group’s pricing strategy, we’re happy to report that 21331 comes with no complaints.

21331 Sonic the Hedgehog – Green Hill Zone captures the spirit and likeness of the original 16-bit classic almost flawlessly. The authenticity and accuracy achieved is incredibly impressive, and as a display piece it both looks fantastic and is a perfect size to be placed almost anywhere. The level of detail is superb, capturing every element you’d expect – even down to how many lives Sonic has to get through the course.

However, the build is perhaps slightly lacking in innovation, especially when compared to some of the recent Ideas sets we’ve been treated to. That’s not to say that it’s rudimentary; it’s just slightly simple compared to other sets that have come before (perhaps by dint of its size and price point), and towards the latter stages the continual stacking of the 1×1 plates does become a little tiresome.

That being said, once the build is finished you’re left with an utterly brilliant and captivating recreation of one of gaming’s most iconic levels. Fans who remember the original when it first came out will instantly be transported back to those heady days, and for those new to the franchise this set will make for the perfect introduction.

How long does it take to build LEGO Ideas 21331 Sonic the Hedgehog – Green Hill Zone?

21331 Sonic the Hedgehog – Green Hill Zone is quite a deceptive set. While it appears to be a fairly straightforward build, the continual stacking of 1×1 plates requires patience and dexterity to get right. Expect to set aside at least a couple of hours to get it finished.

How many pieces are in LEGO Ideas 21331 Sonic the Hedgehog – Green Hill Zone?

1,125 pieces are included in 21331 Sonic the Hedgehog – Green Hill Zone. They are used to construct the Green Hill Zone stage, the two included badniks and Sonic’s arch rival Dr. Robotnik and his flying Eggmobile.

21331 Sonic the Hedgehog – Green Hill Zone is only four studs wide, but measures 17cm high and 36cm long. Also included is a much smaller display stand, big enough for Sonic and the seven Chaos Emeralds to be displayed.

How much does LEGO Ideas 21331 Sonic the Hedgehog – Green Hill Zone cost? 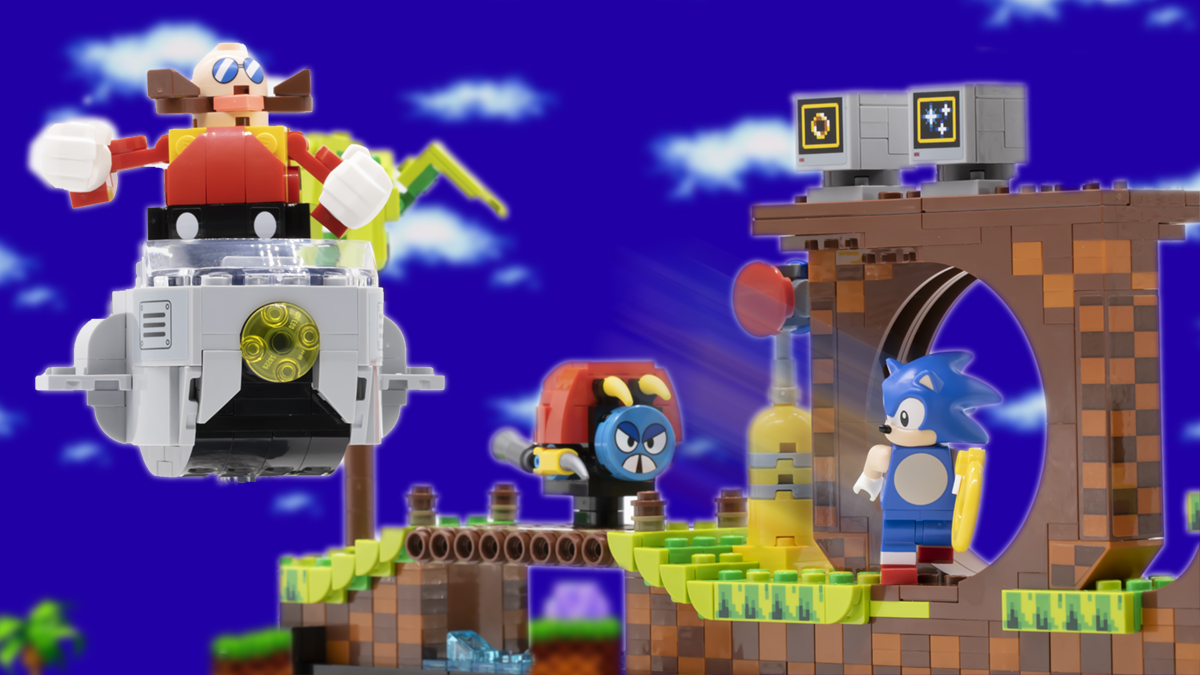