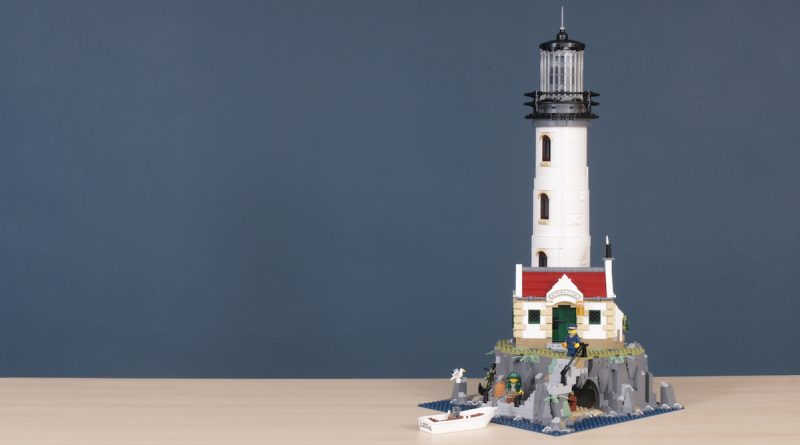 LEGO Ideas 21335 Motorised Lighthouse is a shining example of LEGO creativity at its best – just watch out for the treacherous rocks that are its price.

Built from 2,065 pieces, standing high at 55cm, covered in bright white bricks and with a fully working and rotating light with genuine Fresnel lens, it’s safe to say that there’s never been a LEGO set quite like 21335 Motorised Lighthouse, let alone a LEGO Ideas set.

Clearly built to that same target audience of the older LEGO fan as any number of the quite incredible Ideas and ICONS sets we have welcomed so far in 2022 (and previous to that), 21335 Motorised Lighthouse lives up to the billing as far more than just a novelty release with an interesting new piece.

For as impressive as this set is, though – and it really is – the price is so eye-wateringly expensive it may make you want to stare directly into the set’s light functions (safety warning: obviously, do not do that) so you can forget how mesmerising this set is and you then need not buy it. Otherwise, we’re sorry to report that you’ll probably want to start saving up now…

21335 Motorised Lighthouse launched on September 1, 2022 and for the immediate future is available only at LEGO.com and in LEGO Stores. Ideas sets do otherwise crop up at different retailers after a set period, usually as exclusives to those retailers too. John Lewis, Argos and Zavvi are all examples of places to watch out for this set eventually, as one will inevitably have it, and hopefully with a tasty discount deal to boot.

21335 Motorised Lighthouse is an authentic and fully-realised vision of the unique architecture and functionality that lighthouses have, spread across a genuinely interesting and rewarding LEGO build. Every stage, from the base layout and rockwork through to the cute house and ever-increasing-in-height lighthouse itself, 21335 Motorised Lighthouse is just so very interesting and unique to build.

Central to that build, quite literally, are the Powered Up parts of a battery box, medium motor and cable with lights, hidden inside the rocky platform to the build. The cables travel up into the house and through the lighthouse to the top, alongside internal Technic mechanisations that take the power from the motor to rotate the Fresnel lens. The result is one of the most engaging and authentic motorised experiences we’ve ever built in a LEGO set. Switching on the motor to turn on the lights and start the spinning motion up top really is that good, for that same magnified light effect (thanks to the lens) and what feels like the same pace of 360-degree movement (at least in scaled-down form).

As per the Ideas team’s account of even ensuring the development and inclusion of the Fresnel lens, in spite of the ‘rigorous testing’ required and the significant time constraints of turning fan designer Sandro Quattrini’s original submission into an official set, there have clearly been no shortcuts taken – 21335 Motorised Lighthouse has detail and depth to its construction throughout. This is most obviously reflected in the sheer size and construct of the lighthouse tower itself, with its subtly decreasing widths of sections the further it rises, all the while with detachable backs that reveal a surprisingly spacious interior for one of the included minifigures to climb up.

But the care and attention are just as much felt in the rockwork that could have easily been just a cover for the battery pack, but instead has such intriguing features as angled steps down to a pier built ‘off-grid’, and a decent-sized cove underneath it. Likewise, the house isn’t just for show, with all sorts of quant details of LEGO life at the end of the land included within it. There’s also the additional bonus of a light cable built into it to light up the fireplace inside, and – with the detachable roof back in place – the whole interior from the outside, as visible through the windows, making for quite possibly the cosiest LEGO play feature of all time.

The LEGO Group continually knocks it out of the park when it comes to high-end LEGO sets like 21335 Motorised Lighthouse, exactly because of the same application in excellent building standards across not only the core functions and definitions to the set – in this case the working elements of the lighthouse – but also in every possible detail across the entire model.

21335 Motorised Lighthouse is the latest example of total quality LEGO building, from the first step of the instructions to the last. It’s an impressive model for how it functions, but also for how interesting and unique it stands on display. If you were lucky enough to pick up 21310 Old Fishing Store during its brief run on shelves a few years back, 21335 Motorised Lighthouse feels like its kindred spirit, thematically and creatively, essentially for how it’s way better than any of the writing and photography around the set can otherwise tell you.

All this makes the price of the set all the more frustrating. We are writing this review having shelled out the £259.99 fee to pick it up and still cannot tell you how good this set is. Yet, it remains some undertaking to save up for such a set, particularly in the current economic climate and with so many other high-priced LEGO sets competing for your budget.

Two minifigures are included in 21335 Motorised Lighthouse, as well as a boat (which does float), and a little grey kitten. The design team has spoken about these characters being included to add story elements to the set, and both certainly help maintain the air of authenticity that the model exudes.

The boat is important too, for how it can place one of the characters in the water, to accentuate the isolation of the lighthouse, as well as – at least a little bit – the requirement for its light.

This is where 21335 Motorised Lighthouse comes under criticism. From its announcement through to release, this set has been viewed under critical eyes for the seemingly extortionate price of £259.99 / $299.99 / €299.99. For 2,065 pieces it is much higher than the typically associated ratio value of 10p-per-piece. The price has been explained by the design team as in part down to the inclusion of the Powered Up elements and that exclusive – and inevitably one-use-only – Fresnel lens piece. A non-working lighthouse would have been more affordable, but also much less cool. The LEGO Group went with the cooler option, meaning we just have to save our money for a little bit longer.

Fair enough – except for the difficult economic climate we find ourselves in during 2022, and the sheer number of other equally-as-expensive LEGO sets competing for our investment.

We’re not alone in our assertions, though: Bricksie’s review of the set reflects similarly that while the electrical parts do make the set expensive, they are also what make the set special.

21335 Motorised Lighthouse is a beautiful LEGO set that benefits not only from an intelligent and highly-effective core working function, but also from a remarkable level of attention to detail to every aspect of the set, in much the same way that LEGO Ideas applies to all of its community-inspired creations. It’s a joy to build and a wonder to behold, it stands out on display and it actually works like a lighthouse – a simple function but one that, trust us, once you’ve saved up the money for and built it too, you’ll be just as excited about.

Support the work that Brick Fanatics does by purchasing your expensive LEGO Ideas sets through one of our affiliate links – thank you.

For the type of experience that 21335 Motorised Lighthouse offers, you’re looking towards the higher end of LEGO sets available to compare. Any of the LEGO ICONS modular sets, or LEGO Marvel’s 76218 Sanctum Sanctorum, offer detailed, larger buildings, while the likes of 21333 Vincent van Gogh – The Starry Night and 21332 The Globe showcase just as well the variety and creativity that LEGO Ideas offers as a theme.

How long does it take to build LEGO Ideas 21335 Motorised Lighthouse?

LEGO Ideas 21335 Motorised Lighthouse is an engaging build to be enjoyed over three or four hours if you have the patience. You can rush through it a bit quicker if you just can’t wait to watch the light go around, though.

How many pieces are in LEGO Ideas 21335 Motorised Lighthouse?

LEGO Ideas 21335 Motorised Lighthouse contains 2,065 pieces and two minifigures – a lighthouse keeper and a sailor – plus one cute kitty.

How much does LEGO Ideas 21335 Motorised Lighthouse cost?