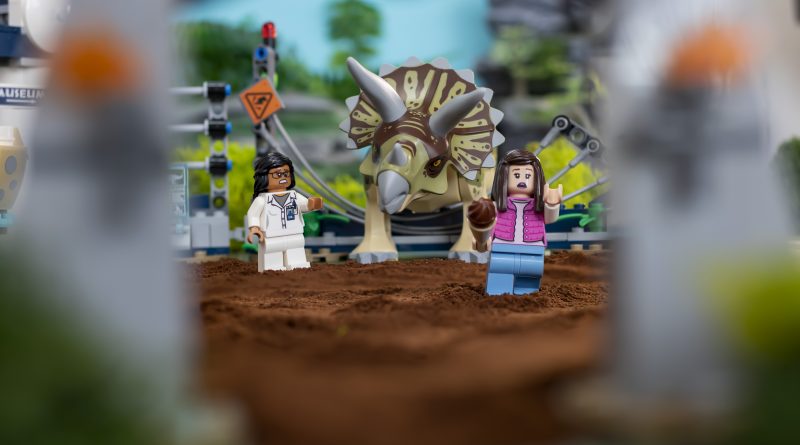 LEGO Jurassic World 75937 Triceratops Rampage seems have a lot to offer – does the substance match the size?

LEGO Jurassic World expands in 75937 Triceratops Rampage. Included in the set is a large Triceratops, a fence section to help contain the beast, a small representation of the iconic gates, Owen Grady’s quad bike, signage and a dinosaur egg teacup-style ride. The set also contains four minifigures, three of which are exclusive.

75937 Triceratops Rampage comes in a sizeable box so fans might be surprised to find there are only three bags inside along with a fairly small manual. It’s a slightly disappointing start to the experience, however once completed the set actually feels very substantial.

The star of the show, the exclusive Triceratops, makes a return in minifigure scale after a seven year absence. The dinosaur has good poseability with the head moving up and down and the legs rotating on a 180-degree axis. The only downside is that the tail is completely rigid. Apart from that the prehistoric beast looks fantastic with great colouring and a wonderful expression.

The fence that makes up the triceratops enclosure is built upon a 2×16 plate which connects to round 4×4 plates in quite a novel yet satisfying way. The vegetation, including green 1×1 round bricks with bamboo leaves and bright green and green 1×1 leaves stacked on top of one another adds nice texture and colour to the fencing and is in keeping with the source material.

Two Technic 1×9 liftarms are connected by 22l hose pieces to create the fence. On the right hand side the liftarm is only connected by one pin and can be raised or lowered, creating the look of the triceratops bursting through the enclosure. It’s incredibly simple yet brilliantly designed.

When the Triceratops is placed over the top it looks amazing and really creates the feeling of a beast on the rampage. The rest of the fence is made of a smaller section built onto a 2×8 plate. It’s a much simpler build, but does include an excellently designed triceratops information board. It is a sticker rather than a printed piece, but still looks great. A negative throughout this set is an over reliance on stickers, with five being used in the small signpost assembly alone and a whopping eighteen for the teacup ride.

Stickers aside, Owen’s quad is actually more complex than first appears. It resembles the disappointing quad bike included in LEGO City Sky Police 60208 Parachute Arrest, but thankfully is more involved. It only takes thirteen steps to complete, but does feel different to other similar LEGO vehicles.

The scaled down version of the main gates, despite their size, look excellent. The colour scheme of light bluish grey, black and dark blue works well (the dark blue 2×2 quarter tiles are also nice parts to add to a collection) and the use of 1×1 round tiles to mimic small pebbles at the gates base is very effective. The inclusion of two flaming torches completes the look.

Finally there is the teacup style ride. The mechanism to make the teacups move around their carousel is built using a fair number of Technic parts. It is hidden very well within the assembly but isn’t quite as smooth as expected. The seats look great when spinning – they are mainly built from tan 4×3 wedges, new in this colour.

Applying the vast amount of stickers does become a chore, even if ultimately they add a lot to the final look. Once finished the ride can be attached to the fencing. In fact, all three separate parts are modular so can be configured in a number of different ways adding nice variety, both from a display and play perspective.

Of the four included minifigures, all aside from Owen Grady are exclusive. Owen in this open necked shirt variant also appears in 75938 T-Rex vs Dino-Mech. Here he comes armed with a carrot for guiding the rampaging beast back into his pen.

As for the exclusive figures, two named characters from Jurassic World make an appearance – Simon Masrani and Allison Miles – both with new torso designs. An unnamed tourist completes the foursome.

75937 Triceratops Rampage offers a lot of variety both in terms of building and play value. Vehicles, dinosaur pens and fairground rides create a really fun LEGO representation of the Jurassic World theme park.

Once completed, all of the elements take up a deceptively large space, making the set feel like great value for money. The triceratops is a great addition and coupled with the fence looks fantastic on display. The over reliance on stickers is a big negative but not enough to say this is a set to avoid. Dinosaur fans will no doubt love it.

75937 Triceratops Rampage is available is s available now at LEGO.com. You can help support Brick Fanatics’ work by using our affiliate links.