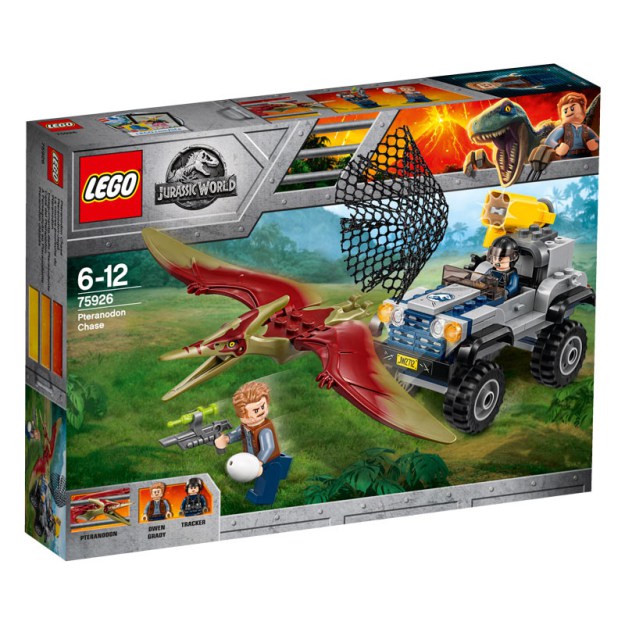 When you need to catch a Pteranodon, is using a jeep any better than a helicopter? The LEGO Group seem to think so in one of Jurassic World: Fallen Kingdom’s cheaper releases

Coming in at the lowest price point for the main System releases for Jurassic World: Fallen Kingdom is 75926 Pteranodon Chase, much like 75915 Pteranodon Capture before it in 2015’s Jurassic World range. Just as with that set, you get two minifigures, a vehicle for pursuit and a Pteranodon to pursue. Yet, for what is the same price, three years later you receive 48 pieces fewer and a slightly chunkier hero vehicle. The helicopter in 75915 Pteranodon Capture was a surprisingly good build with a limited piece count, but unfortunately the same cannot be said for the jeep in 75926 Pteranodon Chase.

It certainly does have its plus points, though, including a nice effect for shaping the front grille and back lights, and the balance of the new, darker colour scheme across interestingly contoured bodywork. Yet, for what works, it’s what doesn’t that ultimately pulls focus, primarily in the form of the incredibly high suspension, the result of building an eight-stud wide chassis even below the curves of the mudguards. It means the wheels are placed about a brick lower than it feels that they should be in relation to the rest of the vehicle, elevating the entire thing as a result.

The counterargument is that the source material’s trailers are packed full of raised, big-wheeled vehicles, and they are, but none as small as the jeep have been shown yet. The raised wheelbase is jarring enough in the other vehicles in the LEGO Jurassic World: Fallen Kingdom sets, but on this smaller car it really seems to not work. For the sake of the vehicles in the range matching, the jeep looks out of proportion on its own.

Meanwhile, the way the back end has been constructed effectively locks into place the transport box for the included egg and the always-fun-but-unfortunately-bright-yellow net launcher. It means that the once more included Owen Grady has a difficult choice to make between perilously balancing atop the vehicle as it chases the Pteranodon, or, impossibly trying to keep up by sprinting alongside it. Chris Pratt runs in the trailer, he’s no Tom Cruise.

The Jurassic World: Fallen Kingdom sets’ price points are much like for those from the Jurassic World range – misleading, due to the expensive moulds for the included dinosaurs. This is a £20 set, but it compares very poorly to most other recent £20 sets the LEGO Group has produced across other lines. Where they have no large, bespoke dinosaur to include, there are extra minifigures, higher piece counts and more involved builds. Paying out the money for 75926 Pteranodon Chase instead gets you the expertly designed Pteranodon, carrying the same dark red detailing as the Pteranodon from 75915 Pteranodon Capture, but across an olive green body and wings. This is one LEGO dinosaur where scale is fair, yet poseability a little more limited. Alongside its limitations compared with other creatures in this line, it’s one dinosaur you may already have from LEGO ranges gone by.

So, for what is essentially a recolour of a dinosaur mould going back as far as 2012’s Dino range, an odd-looking vehicle and minifigures that aren’t exclusive, 75926 Pteranodon Chase is a concoction that doesn’t come together to produce a set worthy of its price. There are better Jurassic World: Fallen Kingdom LEGO sets available offering more substantial play and value. This one carries most appeal for completists and then for bargain hunters, once reduced.

75926 Pteranodon Chase is available now at shop.LEGO.com. You can help support Brick Fanatics’ work by using our affiliate links.