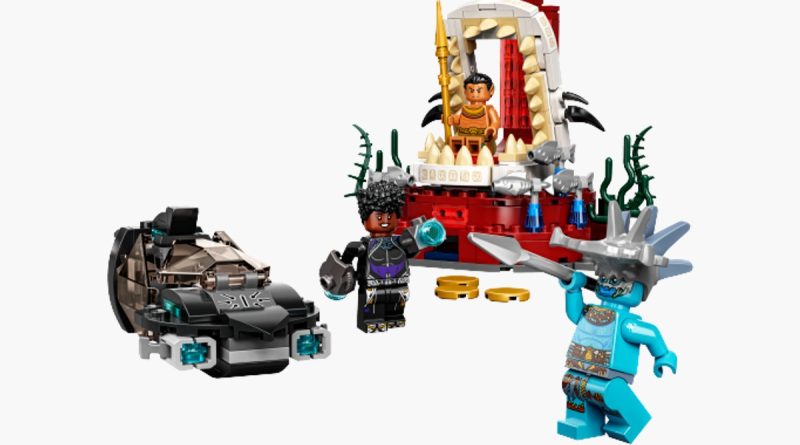 The new LEGO Marvel Namor minifigure for Black Panther: Wakanda Forever seems to be inspired more by his look in the comics than in the film.

Earlier today, July 26, a trio fo LEGO Marvel models were revealed for Black Panther: Wakanda Forever. While we’re still waiting for better images of these sets, it’s evident that Namor doesn’t match his appearance in the MCU, but the comics instead.

The outfit featured on the minifigure in 76213 King Namor’s Throne Hall is undoubtedly based on the movie costume, even featuring side printing the legs that is unfortunately blocked by a tooth so that we don’t whether or not he has the wings on his feet. However, other than the skin tone that’s mostly where the comparisons between this minifigure and Black Panther: Wakanda Forever end.

In the first trailer for Black Panther: Wakanda Forever Namor features facial hair while his iteration in the comics traditionally doesn’t. Admittedly, the initial image of 76213 King Namor’s Throne Hall is blurry, but the Namor minifigure doesn’t seem to have any printing for facial hair.

Combined with the piece used for the hair and pointed ears, it makes for a minifigure that more closely matches the comics version of Namor than the one in the Marvel Cinematic Universe. It’s possible that this is a design based on concept art, but it could also have been a decision that makes LEGO Namor one of the most diverse Marvel minifigures ever released.

Thanks to the details on the outfit combined with the similarities to Namor in the comics, the new minifigure should mesh well with minifigures and models inspired by the Marvel comics and films alike.

With any luck, there’s not much longer to wait until more official images arrive so that we can take a closer look at the new Black Panther: Wakanda Forever minifigures, the rest of which can be seen in our initial report.