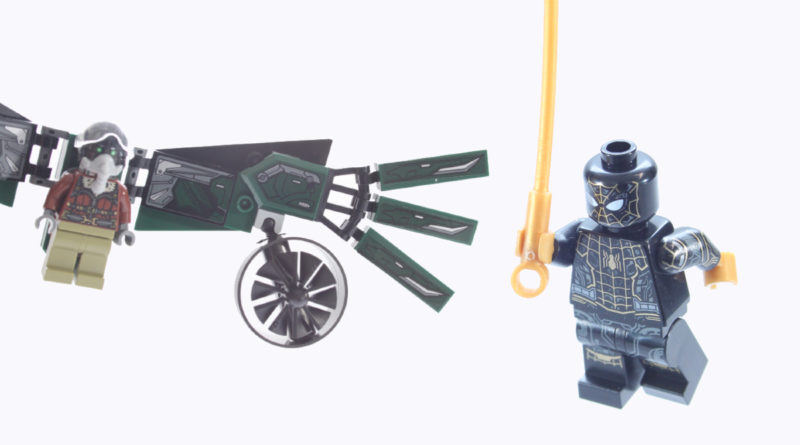 LEGO Marvel 76195 Spider-Man’s Drone Duel has a difficult role to play when it comes to the latest range of Spider-Man models: it’s launched near to the release of Spider-Man: No Way Home, but its packaging insists that it’s inspired by Spider-Man: Homecoming – despite including a suit from the upcoming movie.

But how does the build handle itself when not stuck in the space between two movies; when it has the chance to showcase its golden elements and exclusive minifigures without being directly compared to a cinematic experience? And what about when it is?

There are two main models to 76195 Spider-Man’s Drone Duel – one that we have seen before in the Marvel Cinematic Universe, and one that is entirely new. The eponymous drone of the duel takes up the majority of the bricks and grants the web-slinging superhero the ability to soar through the skies on a spider-centric vehicle.

The shape of the drone – consisting of a large rear section and the four structures that house the propellers and golden wings – helps to sell the arachnid design, with the gold and black colour scheme lending itself well to the shape and overall look of the craft.

Form and function combine in the drone’s rear area, which houses storage for a smaller spider-shaped robot for when one arthropod drone isn’t enough. The front does well as a striking aspect of the design with a singular drum-lacquered piece standing out from the rest of the pearl gold bricks that are used elsewhere in the vehicle.

Additionally, this area also acts as a cockpit for Spider-Man where the printed gold and black arms can be seen through the side. In most models, this could count against the design – but it functions well with the specific Spider-Man minifigure included here, helping to further cement the drone’s unique visual identity.

Turning our attention to the antagonistic half of 76195 Spider-Man’s Drone Duel, the MCU version of Vulture returns to take down the wall-crawler once and for all. The minifigure will be mentioned further on in the review, but we can’t go any further without mentioning the giant brick-built mechanical wings that give the villain his name.

Compared to the first version of the MCU’s Vulture in 76083 Beware the Vulture, this new approach uses fewer elements and has a generally sleeker design that relies more on stickers to capture the important details, meaning that it can focus more on keeping the villain to scale with the other elements of the set.

Arguably, the stickers used here are not crucial to the overall design and could be easily left out to still accurately portray Vulture, but the added touches are appreciated nonetheless. Another sticker can be found on the back of the wings.

The main function of the wings is the moving components, which include turbines, metallic feathers and the wings themselves. The former two work well and hold their position when you inevitably try to pose him mid-battle. However, the latter is too flimsy for this and will regularly buckle under the weight of the build. This makes it nigh impossible to display in any position other than standing straight or lying down.

The hollow studs that you can attach the included web accessories to amplify this flaw – they’re a clever and thoughtful feature that might not be immediately clear, but they’re also equally difficult to utilise thanks to the lack of options for display.

Two minifigures are included in 76195 Spider-Man’s Drone Duel: the friendly, neighbourhood web-slinger and the second version of the MCU’s Vulture. We’ll focus on the former first, which is likely to be the main selling point of the set for many. The exclusive black and gold Spider-Man suit has been featured in marketing material for Spider-Man: No Way Home, including the latest trailer, directly linking it to the new film.

The detail on this minifigure is nothing short of superb, with the intricate webbing of wires and circuitry noticeable when looking closely at the torso. This continues on the arms and legs, with no dual-moulding needed to represent a shift in the colour.

Compared to another recent iteration of the cinematic Spider-Man from 71031 Marvel Studios, the gold-lined minifigure holds up fairly well with an understandably lesser amount of detail that isn’t necessarily required to sell the design and look of the fresh suit.

Vulture has significantly fewer features, but the inspiration from classic pilots is clear – from the breathing apparatus to the fur-lined jacket. This matches his MCU appearance well, with the singular helmet mould from the older set replaced by a moving visor that pairs well with the equipment around the neck.

The double-sided head included with Vulture gives you two options for display, with either the mask covering the eyes or just the sides of the face. The former is the most menacing look, with glowing green reticles peering out at Vulture’s prey from behind the apparatus. However, the other is just as appreciated with the iconic face of Micheal Keaton’s Adrian Toomes now visible for all to see, and not reusing the comic face as 76083 Beware the Vulture did.

While another minifigure would have been appreciated – perhaps for one of Peter Parker’s pals, both of which feature prominently in both Spider-Man: Homecoming and Spider-Man: No Way Home (judging by the trailers) – the lack of one does not feel unfair and the contents present good value for the price.

Despite being split between two films, with clear nods to both present in the build and minifigures, 76195 Spider-Man’s Drone Duel does well in offering a fun and unique experience for a LEGO Marvel set with striking designs and details that help it stand out from other sets at similar prices.

Though it may claim to only be inspired by Spider-Man: Homecoming, the model’s ties to Spider-Man: No Way Home will no doubt help with its appeal as the movie’s release draws closer – particularly through that brilliant black and gold Spidey minifigure.

Thankfully, this link also doesn’t feel forced, and the uniform design of the drone and minifigure – as well as the detailed Vulture – positions 76195 Spider-Man’s Drone Duel as more than just a desperate attempt to tie into the latest cinematic release with an oversized and exaggerated Spider-Man vehicle, a trend that LEGO Marvel has been known to fall into with sets such as 76174 Spider-Man’s Monster Truck vs. Mysterio.

How long does it take to build LEGO Marvel 76195 Spider-Man’s Drone Duel?

LEGO Marvel 76195 Spider-Man’s Drone Duel will take around 30 minutes to build, or perhaps a little longer should you take a moment to appreciate the finer details.

How many pieces are in LEGO Marvel 76195 Spider-Man’s Drone Duel?

LEGO Marvel 76195 Spider-Man’s Drone Duel is ideal for shorter shelves, with a height of just 5cm between the two main models. The drone is the largest in width and depth at 23cm and 25cm respectively.

How much does LEGO Marvel 76195 Spider-Man’s Drone Duel cost? 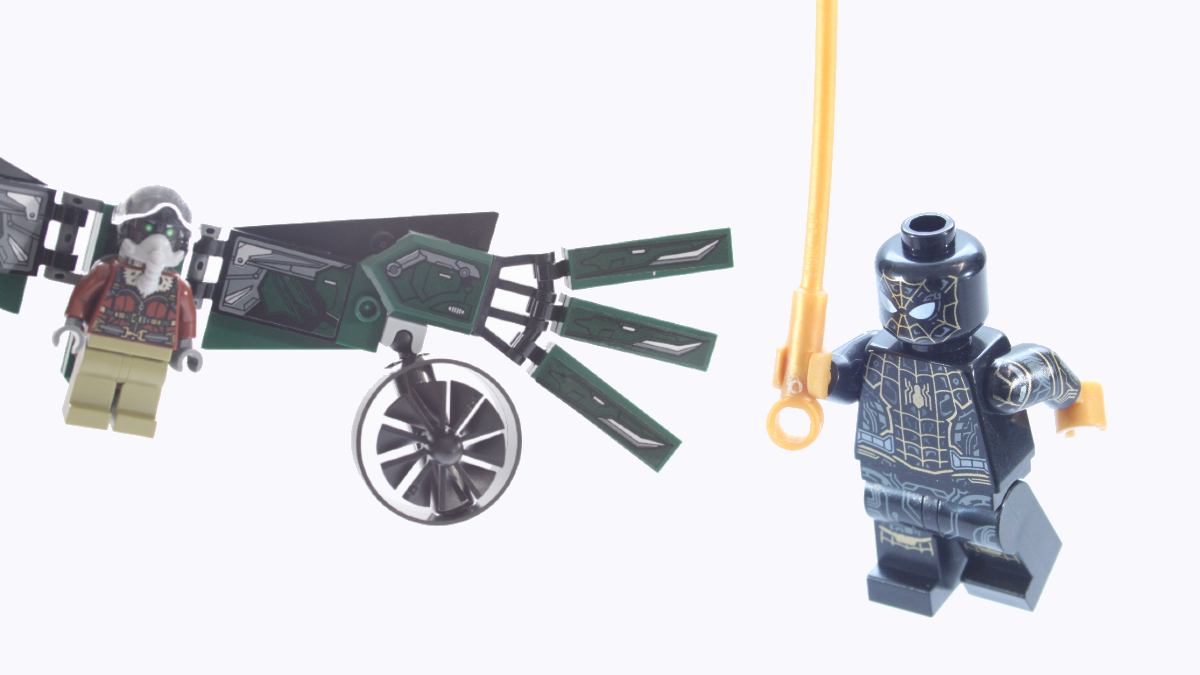