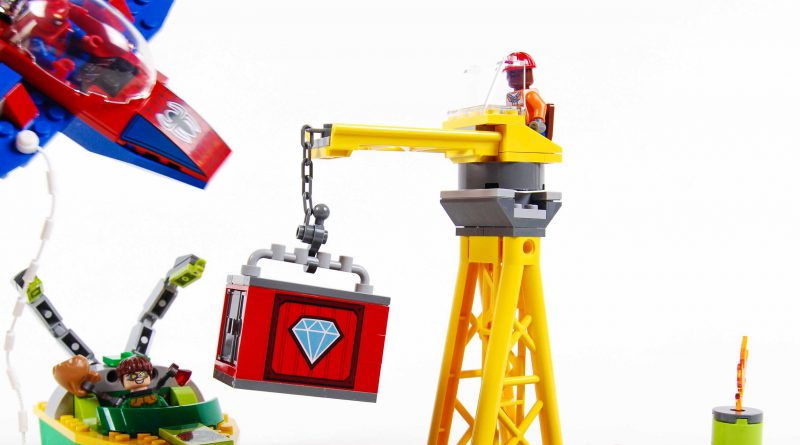 While it may not be immediately apparent, LEGO Marvel Super Heroes 76134 Spider-Man Doc Ock Diamond Heist may have something to offer hardcore LEGO fans

The LEGO Juniors theme was folded into the regular line-up starting with this wave of LEGO Marvel Super Heroes sets, with such sets now branded ‘4+’ instead. In 76134 Spider-Man Doc Ock Diamond Heist, Doc Ock is using a crane and boat to steal a box of diamonds, with Spider-Man in an aeroplane flying in to stop him. 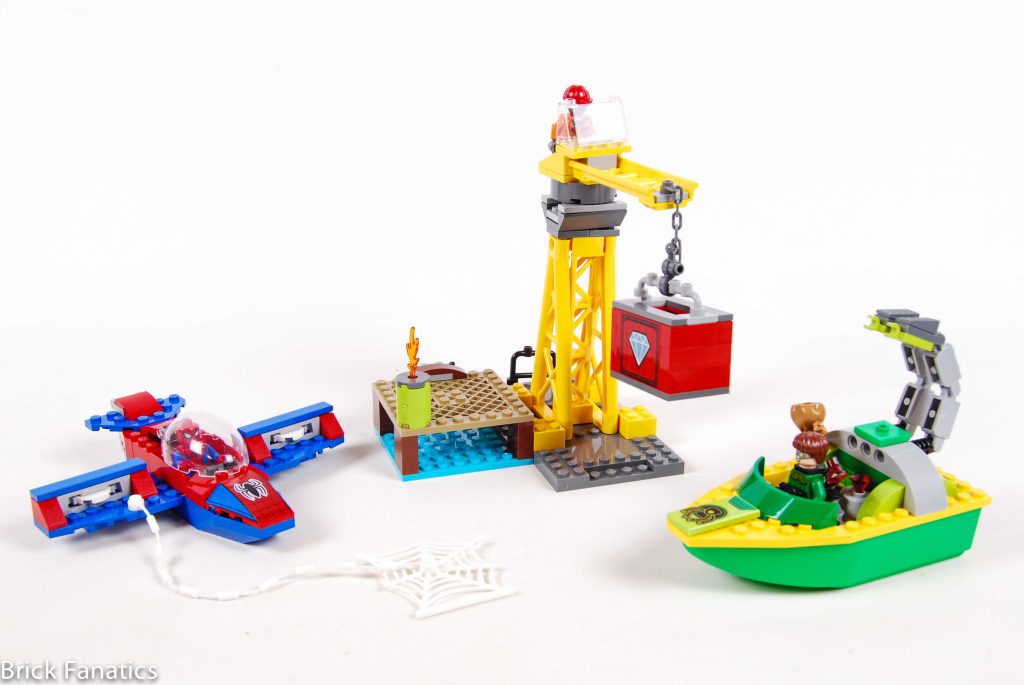 76134 Spider-Man Doc Ock Diamond Heist might be the perfect toy for a four year old. Were this review considering LEGO sets for small children not yet able to put together construction sets, the set might get a five stars out of five. It includes a swooshable plane, villain specific floating boat for bath time and a dock for them to fight over. The working crane is literally providing hours of fun now for my son. Beneath the chunky design intended for young hands, lies a few surprises that caught my eye while helping him build the set.

Those surprises are not to be found in the vehicles. The Spider-Plane and Doc Ock boat are perfect for very small children, and worthless to adults. Large chunky pieces, no detail and useless parts – aside from perhaps the transparent canopy on the plane – make these a pass.

The desirable part of 76134 Spider-Man Doc Ock Diamond Heist as far as adults fans are concerned lies in the dock. While no doubt a simple affair, the crane contains multiple desirable components that had me thinking about stealing this from my son’s room in the dead of night and seeing if he noticed (he did notice). The centre support is a scaffolding component which you can never have enough of. On either side it is flanked by the triangular scaffolding components which are immensely useful pieces, here in versatile yellow which gives them a ton of applications in builds.

Rounding out the enviable parts is one of the new roller coaster pieces, making its only appearance in yellow that I am aware of, used here for the arm of the crane. All told, these four pieces are an amazing group of parts, especially when grouped with the several plates in useful colours which also make up the dock.

The minifigures are nothing to write home about. Spider-Man is the same as in every other product from his line, and if you need to get him there are cheaper options. Doc Ock appears in a very compact version that will prove quite unsatisfying to seasoned fans. The most desirable minifigure is actually the dock worker as he sports an African American head which is still relatively rare within the product line.

At this price point, AFOLs would be better served spending their money elsewhere. If, like me, you have young children in the house this is a great product. They will get a ton of use out of it at the right age, and you can snag some great pieces when they move on to more complex sets.