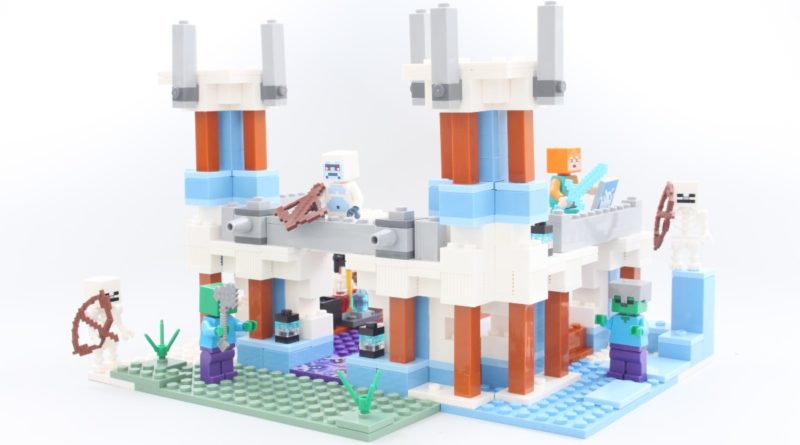 LEGO Minecraft 21186 The Ice Castle arrives to anything but a frosty reception, thanks to an interesting build that offers great value within the video game theme.

The Ice Spikes biome in Minecraft presents an interesting challenge to players, with tall spires of ice sticking out of mountains and hills and reaching toward the sky. For some, this may serve as inspiration for a new build and it appears that the LEGO Minecraft design team has some experience in transforming this unique biome into a home.

21187 The Ice Castle stands as an example of what can be achieved with LEGO bricks, and within Minecraft, paying close attention to the design guidelines of the game. However, it’s not the most remarkable build in any sense.

The box art of 21186 The Ice Castle makes it clear that the set is based in the Ice Spikes biome, and elements of these natural frozen structures can still be seen in the foundation, adding a good amount of colour to the model as the bright blue of the ice mixes with the brown of the wooden fences and the white snow well.

A mixed but uniform combination of colours on the exterior of the ice castle helps it to stand out, even in a wave filled with bright red barns and giant llamas. Keeping to the outside of the castle, stone walls are used as parapets and we appreciate the inclusion of tiles next to the dispensers to show that the walls are connected to them, but not to the stairs, on both towers – just like in the game.

The open space in front of the castle also acts as a good place to display the minifigures in battle, and it uses a minimal amount of elements to achieve this without driving the price up an unnecessary amount.

Inside the frozen fortress, four glazed terracotta arranged in a circular pattern introduce the purple colour of the floor, giving the interior a regal and powerful presence alongside the throne in the middle of the room. That throne also includes a small divet at the back to ensure that the chest, which uses a new element to (finally) depict the block accurately, can open without needing to be moved.

The various tools and crafting stations lining the interior wall don’t quite fill up all the available space, though anyone with more than a few Minecraft models might appreciate the spare room.

The use of the two curved tiles wedged within two pairs of studs to represent a stonecutter is interesting, considering that such a technique was considered ‘illegal’ previously. Whether this will damage the bricks over time has yet to be seen, though it is officially depicted as such in the instructions and seems to be stable at the time of writing.

The highlight of the structure comes in the form of those four printed glazed terracotta tiles, though aside from that there’s not much else to shout about. That’s not to say there’s anything wrong with the build, though its use might be limited unless you have a desire for more frozen features in your LEGO Minecraft display.

A generous number of minifigures are included in 21186 The Ice Castle. Two are exclusive to this set, and the others are common within LEGO Minecraft, though having an extra pair of zombies and skeletons will never go unappreciated.

Those exclusive minifigures include the Royal Warrior and a yeti. The Royal Warrior wields a shield with a snowflake design, which you could also use as a banner as it applies to both functions. The characters feature printing on the front and back of the torso, the legs and the head and help to add more variety to the Minecraft minifigure selection after plenty of appearances of Alex and Steve in the theme.

For £44.99 / $49.99 / €49.99, the cost of 21186 The Ice Castle feels just right in every region, with a substantial build and wealth of minifigures to expand your existing display, or start an all-new LEGO Minecraft collection.

It’s hard to argue with what’s included in this model for the price, though swapping out the two skeletons for the rarer strays from 2018’s 21142 The Polar Igloo would have been greatly appreciated, and more accurate given they spawn more frequently than normal skeletons in the Ice Spikes biome.

A biome of ice and snow might seem more suited to a winter range rather than a summer selection, but 21186 The Ice Castle stands tall alongside the rest of the theme’s new models, presenting good value in both build and minifigures, as well as a welcoming presence with an array of bright and neutral colours.

There’s no need to give 21186 The Ice Castle the cold shoulder this summer, though we understand if your LEGO Minecraft budget is being put towards bigger builds as other than two minifigures and printed tiles, there’s not much else exclusive to 21186 The Ice Castle.

How long does it take to build LEGO Minecraft 21186 The Ice Castle?

It should only take you an hour to build 21186 The Ice Castle, or possibly less if you’ve got some experience with LEGO Minecraft sets.

How many pieces are in LEGO Minecraft 21186 The Ice Castle?

499 pieces are included in 21186 The Ice Castle, and are used to create six minifigures and the frozen fortress itself.

How big is LEGO Minecraft 21186 The Ice Castle?

LEGO Minecraft 21186 The Ice Castle measures 16cm high, 23cm wide and 19cm deep, using a series of larger base elements as the foundations of the model.

How much does LEGO Minecraft 21186 The Ice Castle cost?