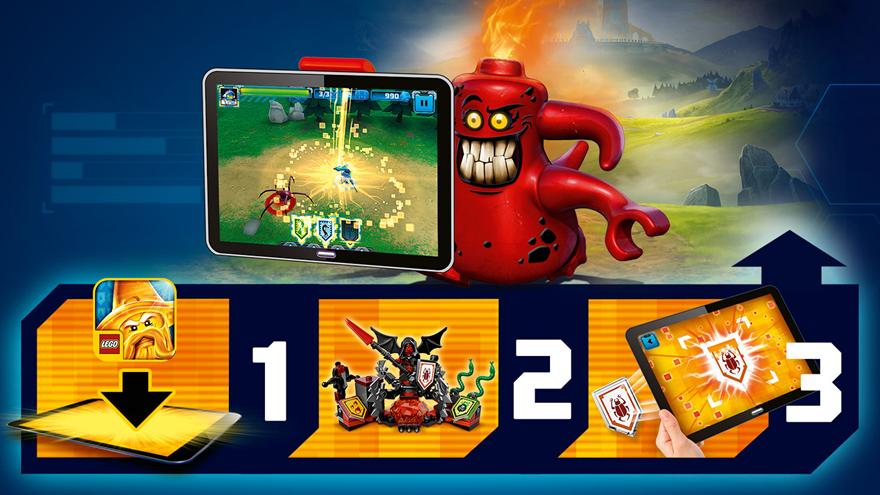 Blow away your enemy with spinning swords, shoot a mace rain with a six stud shooter, or perhaps fire off bananas to make your opponent slip? Ultimate NEXO KNIGHTS™ sets let your creativity defeat your enemy with ultimate battle gear and unique NEXO Powers.

Spin the swords on Ultimate Clay’s ultra, armour to blow the enemies off their feet! Attach the four Lava dragon wings and scorch them from the air, and if things aren’t going your way, protect yourself against the enemy’s deadliest weapons with the force field disc. Scan for three NEXO Powers: Sword Tornado, Lava Dragon and Force Field.

Swap royal duties for some real action! Ultimate Macy might be a princess, but she knows how to fight with the futuristic NEXO Powers. Fire a Mace Rain with the six-stud shooter, swing the Phoenix axe and tangle the enemy up in Jungle Dragon vines and sling them far! Scan for three NEXO Powers: Mace Rain, Phoenix Blaze and Jungle Dragon.

Defeat Ultimate Aaron’s enemies in one stroke with the awesome Target Blaster NEXO Power. Surely the taste of victory will be sweet—and banana flavoured­—as you can also attack your enemies with banana bombs! Scan for three NEXO Powers: Arrow Strike, Banana Bombs and Target Blaster.

Ultimate Robin is only in his first year at Knight’s Academy, but has robotic ultra, armour in a class of its own! Change his impressive spring-loaded shooter into robot legs to grow tall. Jolt opponents with the static shock projectiles or be sneaky and throw chicken legs at the enemy! Scan for three NEXO Powers: Mech Master, Chicken Power and Storm Dragon.

Ultimate Beast Master might have an explosive temper—but this time he’s got his hands on dynamite! Throw the sticks at the opponents or whizz the manic Globlins around on chains! Cause more carnage by sucking energy from your enemies. Scan for three NEXO Powers: Globlin Attack, Spirit Vortex and Dynamighty.

Who’s that scuttling in the shadows? Ultimate Lavaria is hunting her prey with scary spider legs and wings. Pounce on the opponents and shoot a fireball with the crossbow stud shooter and send snakes slithering with their venomous bite! Scan for three NEXO Powers: Beetle Bomb, Incinerate and Venom Bite.

Upgrade your battle skills by scanning shields to obtain awesome NEXO Powers for your digital power collection in the free LEGO NEXO KNIGHTS™: MERLOCK 2.0 app. The app is available as a free download via App Store, Google Play, Samsung Apps and Amazon Appstore.

The much-anticipated LEGO® NEXO KNIGHTS™ sets are available at all good toy retailers now!. Begin your adventure at www.LEGO.com/NEXOKNIGHTS.