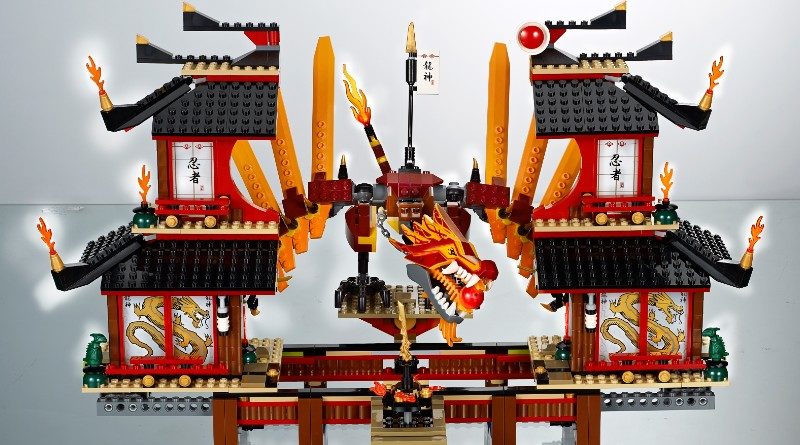 LEGO NINJAGO is 10 years old, so there’s no better time to look back and discover the origins of this fan-favourite theme.

Today is a special moment for NINJAGO fans as they celebrate the 10th anniversary of the long-running theme. The LEGO Group aren’t one to shy away from the anniversary either with the release of 71741 NINJAGO City Gardens and a host of concept art to share.

So, join Brick Fanatics as we explore the history of NINJAGO and how it came to be starting with the very first year, and the time before.

You might assume by the sheer creativity of NINJAGO that the initial concept took months of planning, hard work and an incredible number of ideas that didn’t even come close to resembling the final product. Well, you’d be wrong.

There were indeed months of planning and hard work, but, in 2009, Tommy Andreasen simply sketched out a drawing, a single thought was brought to life, and it became the start of something huge. The initial artwork from the Senior Manager of Entertainment Development at the LEGO Group was the very first drawing of what would become LEGO NINJAGO, featuring five elemental ninjas and a sensei in the middle. The water ninja would eventually become Nya, but that comes later in the story of NINJAGO.

The drawing included the word ‘Spinjago’ on it, which later morphed into ‘Spinjitzu’, combining ‘spin’ and ‘ninjitzu’ together for the first time, as the team explored the idea of the ninjas being on spinners of some kind.

Tommy’s work was then followed up during the same weekend with a full-colour concept of four ninjas and Sensei Wu by Concept Artist Craig Sellars. Tommy has shared more work from Craig and others on the NINJAGO team before.

Further concept art in that first year includes the first development of Skulkin and Lord Garmadon.

With the basic idea of elemental ninja on paper, proper development of the theme could begin, with it originally only designed to have two seasons. These seasons were drawn up at once, creating a more interweaving story between them.

Concepts for this year include the first image of a young Lloyd Garmadon, a summary image, a set of internal presentation posters and a hint as to Nya’s hidden role as Samurai X, or as she was once called, Samurai Nya – not very inventive considering she was trying to keep her identity a secret.

After two years of planning, the launch was here, the theme had been approved and come January 14, the very first episode of LEGO NINJAGO would air. The first season would be a series of pilot episodes that revolve around the collection of four golden weapons, introducing the soon-to-be iconic ninja team and a villain that would become ingrained into the story of NINJAGO.

The first year saw 39 sets release, with everything from spinners to dragons, skull monster trucks and more. Immediately, NINJAGO was a hit with fans with best seller sets including 2505 Garmadon’s Dark Fortress, 2260 Ice Dragon Attack and 2507 Fire Temple. Even a video game released with LEGO Battles: NINJAGO.

The story of LEGO NINJAGO was only beginning, the first of the hurdles was cleared and the second season was next to release. Whether it would be just as popular with fans was a burning question – what would the NINJAGO design team do for the years ahead? Come back for the next part of the story with Brick Fanatics…

One thought on “LEGO NINJAGO from thought to theme: Before time had a name”