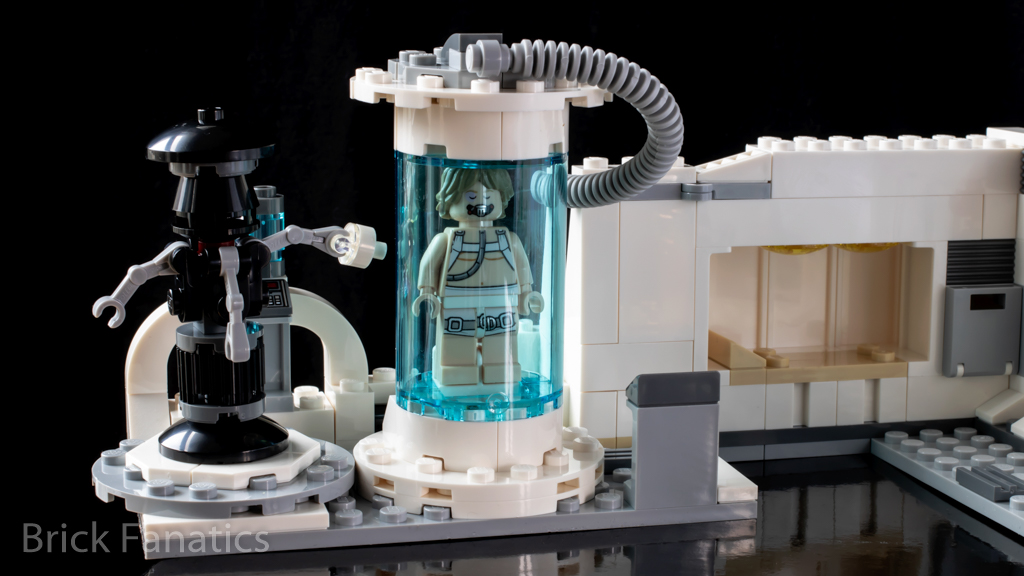 Luke Skywalker has an unfortunate encounter with a Wampa, but thankfully 2-1B is in the Hoth Medical Chamber to patch him up

When it comes to Star Wars: The Empire Strikes Back, Hoth is one location that the LEGO Group just loves to go back to time and time again. Having neglected to include the medical chamber in 2016’s Ultimate Collector Series 75098 Assault on Hoth, is now the perfect time to add this small but iconic scene to your Echo Base collection?

75203 Hoth Medical Chamber is priced at £34.99 and contains 255 pieces (including one new printed piece) spread across three bags with no stickers. Each bag contains one of the three included minifigures, which I’ll get to later but for now let’s focus on the build itself. 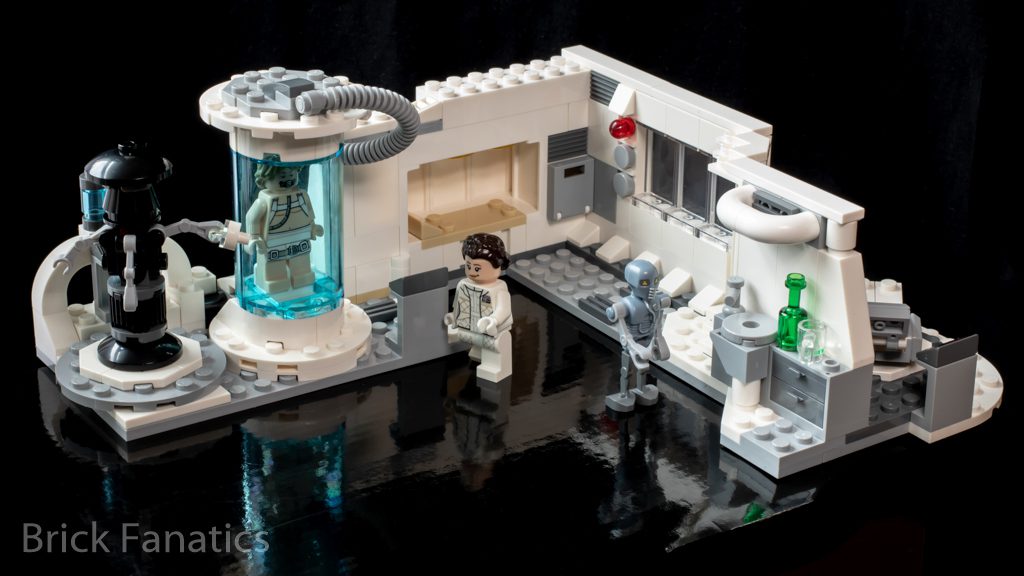 The first stage of the build has you constructing two parts of the chamber. The viewing window from which a worried Leia, Han, Chewie and C-3PO watch over the injured Luke while he’s floating in the Bacta Tank, although in this set only Leia is included to be the concerned friend, as well as the small bed Luke lies in to recover in after he’s been removed from the tank.

Upon opening bag one I was struck by two thoughts. Firstly, there is a nice array of medical paraphernalia including to hypodermic needles in two different colours – lime green and light blue. Secondly, and more importantly, there are not actually that many pieces in the bag. This isn’t necessarily a negative, it just had me intrigued as to how these few pieces would go together to form this initial structure.

This is where I think the LEGO designers have done a fantastic job with this set, using minimal pieces incredibly effectively. In this instance a mix of standard bricks combine with a number of 1x2x3 white panels to build the walls and alcove that house the bed. The on screen medical chamber has very distinct walls and by using the panel pieces, the LEGO Group has done a great job recreating these.

Throughout the set there are several coloured transparent pieces used to represent lighting. They all look incredibly effective but none so much as the two transparent yellow 2×2 inverted dishes that are placed above Luke’s bed. In the right lighting conditions, they really do look like they are giving off a faint yellow glow and, together with the tan bed, are very evocative of the location we see on screen.

The rest of bag one turns its attention to the back wall and viewing window. I love that the LEGO design team has decided to include this as part of the Medical Chamber as being able to recreate such an iconic shot from the film, not just through play but for toy photography too, is a really nice addition.

Bag two tasks you with completing a small area containing a few medical supplies and a wash basin as well as a check-up area complete with bed and control panels. This area is actually my favourite part of the set, purely from a design point of view.

I absolutely love the little check-up bed. The use of a curved 2×2 slope piece together with light blueish grey ingot pieces for a pillow and arm rests just works wonderfully. It honestly looks so effective. However, there is one problem with this area – you can’t open the cupboard properly! The bed gets in the way unless you spin it into a really awkward looking position. It is a minor design flaw in what otherwise is a really well-designed section. As a side note, if you want to recreate the infamous Luke and Leia kiss, then this is the area to use…

Interestingly, this area is on the other side of the wall from the recovery bed and a large door is used to separate the two areas of the Medical Chamber. This definitely gives the set a larger feel and I like the playability of being able to use both sides of the set.

Back on the other side of the wall is the small medical supply area I mentioned. Although there are minimal parts used in its design they are put to great use and the overall shaping of the wash basin looks exactly as it should.

What I am particularly fond of, not just in this area but throughout the whole set in general, is the little pockets of detail that the designers decided to include. The macaroni pieces used above the wash basin are totally unnecessary but in a really good way as they add so much. It’s this attention to detail throughout that a lot of love and care into the design of this set.

The final stage of this build sees you constructing the iconic Bacta Tank along with the FX-7 medical droid – the design of which is absolutely spot on, the shaping of the droid looks exactly as it should. I would love to know why the designers opted for a black body and dark bluish grey arms when in fact the movie version was dark grey with white arms? It’s not as if these colours aren’t widely available in the LEGO portfolio. It’s a real shame as the designers have clearly gone to a great effort to make everything else as accurate as possible.

That aside, the Bacta Tank design is what you would expect. Two transparent blue cylinders that connect to form the entire tank. There is one play feature included, which allows you to lower one half down, place a minfigure inside and then close it up again. I do love the fact they included the hose pipe going into the Bacta Tank. Technically it should be two on either side, but I appreciate that would add to the piece count and up the price even more.

Speaking of play features, the are not a great many included in this set. The Bacta Tank opens and closes, the FX-7 droid can rotate 360 degrees, as can the medical bed, and there are a few drawers and containers for you to place medical equipment inside. The whole set is on a hinge and can either be opened right up for play or if you prefer can be closed in on itself making display a little bit easier.

The LEGO Group has done a fantastic job with the design of this set. I love the attention to detail and think the designers have worked well to accurately recreate this iconic scene. I wouldn’t say it’s the best example of a set that you would proudly display on the shelf but that certainly doesn’t mean it looks bad either.

So, to the minifigures. Princess Leia has the same torso and leg printing as she did in 75192 Millennium Falcon. This is a great way to get those minfigure parts for anyone who wants to spend less than the cost of that expensive set. The face print remains exclusive in the UCS version so in this set Leia has a smirk/smile on one side of her face and an angry expression on the other. This I am calling her “scruffy looking nerf herder” face as it’s the only reason I can think that she should would be looking angry in this scene. It is a beautiful minifigure though and definitely the highlight of the set for me.

If you’ve ever wanted to own a Luke Skywalker minfigure in nothing but his tighty whities, this is your chance. I honestly love this minfigure, he is just so unique. The printing on the legs and torso is fantastic and updated from the 2011 version released in 7879 Hoth Echo Base. I love the way this minfigure looks placed inside the Bacta Tank with the breathing mask face print. The face printing is not quite as good as the older version of this minfigure. The scarring just isn’t as detailed, in this instance it’s just a black eye.

The third minfigure included within this set is the medical droid 2-1B. Another figure originally released in 2011, with not much changing this time around aside from the colour of his legs from light blueish grey to dark blueish grey. It is the single body piece that remains the highlight of this minfigure – a well made sculpt with nice detail and great printing.

Looking at the negatives, this is a little overpriced for what it is. I was expecting it to fall into the same category as 75200 Ahch-To Island Training and 75208 Yoda’s Hut, but it comes in at £10 more expensive than either of those. Those two sets had around thirty less pieces, but Yoda’s Hut did at least come with three minifigures. 75203 Hoth Medical Chamber is slightly larger than those sets when spread out fully, but not enough to justify an extra £10. Also, if you are looking for a challenging build, than this set is definitely not for you.

That aside, there is just something about this set that pushes all of the right nostalgia buttons. As an avid LEGO photographer, I can see great potential with this set to recreate a number of iconic moments from the film and the big kid in me can see the potential this set has for play.

Overall this would make a great addition to any Echo Base sets you might have in your collection already, or if this is your first foray into the range of Hoth LEGO sets, then it is a great place to start.

75203 Hoth Medical Chamber is available now at shop.LEGO.com. You can help support Brick Fanatics’ work by using our affiliate links.