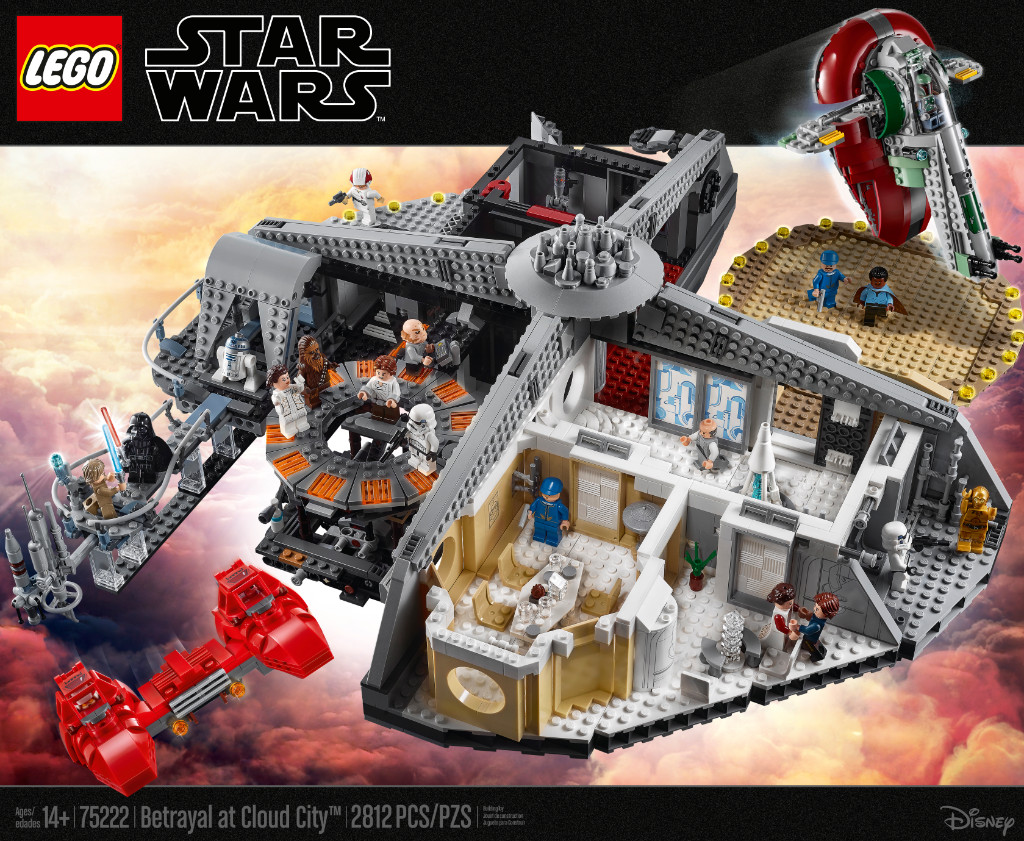 The next big Star Wars playset, 75222 Betrayal at Cloud City, has been announced by the LEGO Group.

In an official announcement and series of images, the LEGO Group has unveiled LEGO Star Wars 75222 Betrayal at Cloud City. This new playset uses an impressive 2,812 pieces and will be priced at £299.99/€349.99 ($349.99/€349.99) when it is made available for VIP release on September 13, before a general release date of October 1. It will be the first time that the memorable location from The Empire Strikes Back has been available to LEGO fans since the launch of 10123 Cloud City in 2013.

This set it billed as part of the ‘LEGO Star Wars Master Builder Series’, suggesting that these large, minifigure based sets will be getting a consistent label along the same lines as ‘Ultimate Collector Series’.

Here is the official description and a selection of images:

Relive a world of unforgettable moments from Star Wars: The Empire Strikes Back or add your own fun twists to the story with this LEGO® Star Wars 75222 Betrayal at Cloud City set. The amazingly detailed set is divided into 4 sections, each depicting scenes from the classic movie. There’s a landing platform complete with Boba Fett’s Slave I ship, a detailed promenade, a dining room with seating for 5 minifigures, a garbage processing room with incinerator, and a sensor balcony for epic Luke vs. Vader Lightsaber duels. There’s also a carbon freeze chamber with a function to ‘freeze’ Han in carbonite, an interrogation chamber and prison cell, a secondary landing platform for the Twin-Pod Cloud Car, and so much more. Add an astonishing 18 LEGO minifigures plus 2 droids to the mix, and you have a set that Star Wars and LEGO fans of any age would be proud to add to their collection.

• Includes 18 minifigures: Han Solo, Princess Leia and Luke Skywalker in Bespin outfits, Chewbacca, C-3PO, Lando Calrissian, Lobot, 2 Cloud City Guards, 2 Cloud Car Pilots, Leia and Han in Hoth outfits, Darth Vader, Boba Fett, 2 Stormtroopers and an Ugnaught, plus R2-D2 and an IG-88 droid.
• Section 1 features a landing platform with a sliding entrance door and Boba Fett’s Slave I ship with an opening minifigure cockpit, movable wings and space underneath to store the Han in carbonite element.
• Section 2 features a dining room with a table, seats for 5 minifigures and a decorative Cloud City micro build; lounge with a transparent sculpture and 2 chairs; garbage processing room with an incinerator, conveyor belt and a deactivated IG-class droid; and a promenade with tree sculpture, mural relief and opening doorways leading to other parts of the model.
• Section 3 features a sensor balcony with railing and swing-out function, plus a maintenance cabin with opening round window for epic Lightsaber duels, plus a carbon freeze chamber with lever-activated ‘freeze’ function.
• Section 4 features a dark-red corridor leading to the interrogation chamber with a turning interrogation chair, plus a prison cell, hangar with a secret trapdoor and tool & weapon rack, and space for the Twin-Pod Cloud Car with opening minifigure cockpits and 2 stud shooters.